COGAT, the Israeli defense body that authorizes settlement construction, confirmed the approvals, which drew swift condemnations from the Palestinians.

The anti-settlement monitoring group Peace Now said that over 90% of the homes lay deep inside the West Bank, which the Palestinians seek as the heartland of a future independent state, and over 200 homes were located in unauthorized outposts that the government had decided to legalize.

Israel has stepped up settlement construction during President Donald Trump’s term. According to Peace Now, Israel approved or advanced construction of over 12,000 settlement homes in 2020, the highest number in a single year since it began recording statistics in 2012.

“By promoting hundreds of settlement units, Prime Minister Netanyahu is once again putting his personal political interests over those of the country,” the group said. “Not only will this settlement activity erode the possibility for a conflict-ending resolution with the Palestinians in the long-term, but in the short-term it needlessly sets Israel on a collision course with the incoming Biden administration.”

Netanyahu’s office said last week he would seek approvals for the latest construction projects. They include 100 homes in Tal Menashe, a settlement where an Israeli woman was killed last month in an attack for which a Palestinian man has been charged.

The Palestinians claim all of the West Bank, captured by Israel in the 1967 Mideast war, as part of a future independent state. They say the growing settler population, approaching some 500,000 people, makes it increasingly difficult to achieve their dream of independence.

Jordan, which borders the West Bank, and the European Union also condemned the Israeli announcement. The EU said it is “contrary to international law and further undermines the prospects of a viable two-state solution.”

A string of U.S. administrations, along with the rest of the international community, opposed settlement construction. But Trump, surrounded by a team of advisers with close ties to the settler movement, took a different approach. His administration did not criticize Israeli settlement announcements, and in a landmark decision, announced in 2018 that it did not consider settlements to be illegal under international law.

As a result, Israel approved plans for over 27,000 settler homes during Trump’s four-year term, more than 2.5 times the number approved during the Obama administration’s second term, according to Peace Now.

Biden is expected to return to the traditional U.S. position of opposing settlements, setting the stage for a possible clash with Netanyahu. 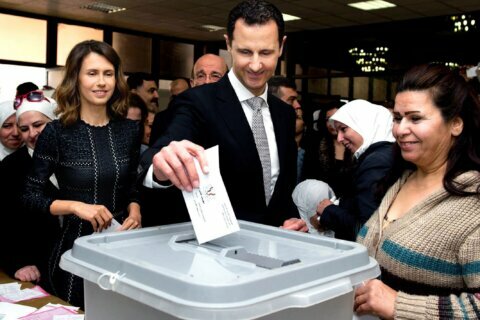 Syrian presidency says President Bashar Assad and his wife have tested positive for coronavirus; both are doing good