CAIRO (AP) — Libya’s Central Bank said its board has approved a single official exchange rate for its currency, the dinar, following its long-awaited meeting Wednesday.

The United Nations hailed the move as “important and much needed” amid a years-long conflict that crippled the economy of the oil-rich North African country.

The Central Bank of Libya’s board set the new rate at .48 dinars per U.S. dollar, according to a statement from the bank. It said the new rate would go into effect starting Jan. 3.

The board’s decision marks a breakthrough in the economic track of the U.N.-brokered, multi-track talks to end the chaos that has engulfed Libya since the 2011 overthrow and killing of dictator Moammar Gadhafi.

The CBL’s board meeting was the first in five years and was marked by “the spirit of optimism, positivity and the prioritization of the national interest,” it said.

With the largest proven oil reserves in Africa, Libya’s oil and money are strategic assets that have fueled conflict. The standoff over petrodollars reveals the extent to which Libya’s riches have always been the real stakes of the country’s deep-seated civil strife.

The Central Bank of Libya is the repository for billions of dollars annually in oil revenue as well as foreign reserves. In 2014, the bank splintered along the country’s broader political fault lines. The internationally recognized headquarters remains in Tripoli, while an eastern branch allied with military commander Khalifa Hifter was set up in Benghazi.

The official exchange rate in western Libya is at 1.34 dinars to one U.S. dollar. The dollar is traded at over five dinars on the black market.

U.N. acting envoy for Libya Stephanie Williams welcomed the move as a “good sign” of progress toward the unification of the central bank.

“Now is the moment for all Libyans — particularly the country’s political actors — to demonstrate similar courage, determination and leadership to put aside their personal interests and overcome their differences for the sake of the Libyan people,” she said.

The move by the central bank came after the country’s rivals failed to agree on a mechanism to choose a transitional government that would lead the country to elections in December next year. 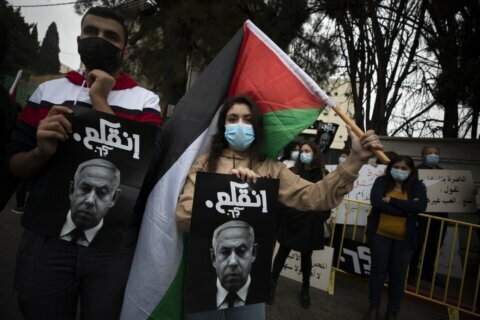