JERUSALEM (AP) — Tel Aviv’s mayor announced Tuesday he was forming a new faction in the upcoming Israeli parliamentary elections as the once-formidable Blue and White party began disintegrating ahead of the March vote.

Ron Huldai, 76, the long-time mayor of the country’s secular metropolis and a popular figure among the country’s left-leaning voters, said he “can no longer stand on the side” and will vie in the increasingly crowded race of contenders to be Israel’s next prime minister.

The Knesset, Israel’s parliament, dissolved last week after the government failed to pass a national budget for 2020 amid bitter coalition disputes between its two main partners, the Likud and Blue and White. Israel now heads to its fourth national election since March 2019, while facing a runaway coronavirus outbreak, a devastating economic crisis and a prime minister on trial for corruption.

“As a public servant for over 50 years, I tell you today: We will not grow accustomed to a prime minister with indictments,” Huldai said, calling for widespread reforms and appealing to a broad swath of Israelis for support. He said his new party would be called “The Israelis.”

Huldai was flanked by Avi Nissenkorn, a former labor union leader who served as Israel’s justice minister, who announced he was breaking away from Defense Minister Benny Gantz’s Blue and White party earlier in the day.

“We will bring good news to hundreds of thousands of Israelis who feel that they don’t have a political home — and we will do this with actions and not words,” Nissenkorn said in a statement announcing his departure.

Huldai joins a crowded race of political parties seeking to make it into parliament in the March 23 election. Gideon Saar, Prime Minister Benjamin Netanyahu’s chief rival within the ruling Likud party, broke away earlier this month to form a rival faction called “A New Hope.”

Blue and White said Gantz asked Nissenkorn to tender his resignation as justice minister after he had “chosen his new political home.”

Gantz said at a news conference Tuesday evening that he would contend in the upcoming elections and would forge an alliance to topple Netanyahu.

Blue and White held 17 seats in the 120-seat Knesset, but is now polling in the single digits in the run-up to the March 23 election. 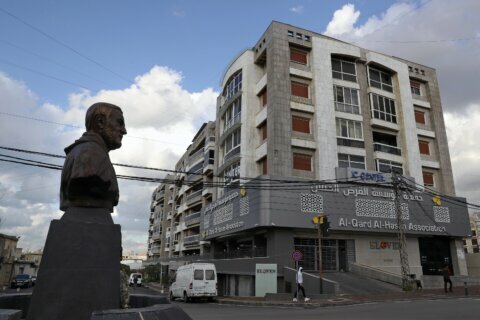