BAGHDAD (AP) — Iraq’s Central Bank on Saturday announced it will devalue the Iraqi dinar by over 20 percent in response to a severe liquidity crisis brought on by low oil prices, a measure that has sparked public outrage as the government struggles to cover its expenses.

Riot police were dispatched outside the central bank headquarters in central Baghdad prior to the announcement in the event news of the devaluation sparked protests. A leaked draft of the state budget law for 2021 caused furore on the Iraqi street last week as it confirmed plans to devalue the dinar.

The new rates represent a dramatic reduction from the previous official rate of 1,182 IQD. It is the first reduction in exchange rates that the Iraqi government has made in decades.

In a statement, the Central Bank set the new rate for the dinar, which is pegged to the U.S. dollar, at 1,450 IQD when selling to the Iraqi Finance Ministry. The dinar will be sold to the public at 1,470 IQD and to other banks at 1,460 IQD.

The devaluation raised the prospects of the dinar weakening further on the street. The rate has already risen to 1,400 IQD per U.S. dollar on Saturday, up from 1,300 IQD last week, at currency exchange agents.

“I stopped exchanging currency,” said Abo Abed, who works at a currency exchange in the Karrada neighborhood of the capital. He turned away a customer with a $100 bill, saying he could only sell at the old rate of 1,300 IQD. “Who knows, tomorrow it could be 1,800 IQD.”

Since an oil price crash earlier this year, Iraq has been grappling with an unprecedented liquidity crisis. The crude-exporting country has had to borrow from the bank’s dollar reserves to pay the nearly $5 billion in monthly fees for public salaries and pensions. Oil revenues, which account for 90% of the budget, have brought in an average of $3.5 billion.

Efforts to introduce reforms have been met with opposition and to date, the government has been borrowing internally to foot state bills.

A devaluation would give oil-rich Iraq, which imports nearly all of its goods, more dinars in hand to make urgent payments. But setting a new rate has been a delicate balancing act to satisfy the government’s needs for liquidity without impacting the average Iraqi.

The Finance Ministry is responsible to allocate salary payments to public workers, the largest working force in Iraq and among the most disgruntled by the new currency measures.

The bank justified the devaluation saying it was the product of “intense deliberations” with the prime minister, finance minister and lawmakers, and stressing the reduction in the dinar’s value would be a one-time occurrence.

“It must be emphasized here that this change (reduction) in the value of the Iraqi dinar will be one-time only and will not be repeated,” the statement said. “The Central Bank will defend this price and its stability with the support of its foreign reserves,” which it maintained are still at stable levels.

The bank blamed poor economic policies over the last decade. It said it had “no choice but to intervene” as poor economic planning and fiscal policies from Iraqi politicians have reduced Iraq to a crude-exporting state with the bulk of state expenditures going toward paying a bloated public sector.

The devaluation drew the ire of public sector workers. Many fear a weakened dinar, as well as plans proposed in the budget to cut salaries and impose taxes, will amount to pay cuts.

While taking a step toward austerity, the proposed state budget for 2021 also calls for record spending projecting a deficit of nearly $40 billion. A Cabinet session to vote on the law was postponed to Sunday.

From there, it will be voted on by lawmakers, a challenging task as the cuts are considered wildly unpopular ahead of next year’s nationwide elections.

“It will be very difficult (to pass),” said lawmaker Sarkawt Shamseddine. “In order to to convince MPs to vote for this big bill the government has to show it has other plans … to increase revenues. That’s the strategy.”

Prime Minister Mustafa al-Kadhimi called for early elections to take place one year earlier than scheduled on June 2021, in line with demands of anti-government protesters. 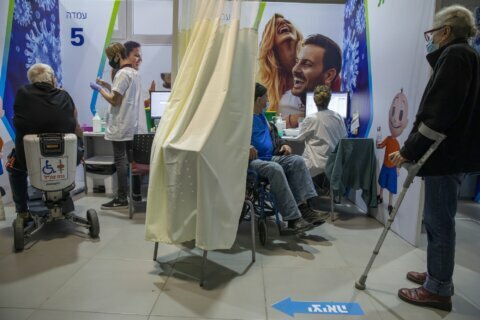