BEIRUT (AP) — Lebanon’s prosecutor general on Monday ordered the release of a Lebanese-French businessman linked to the probe of alleged illegal funding of former French President Nicolas Sarkozy’s election campaign more than a decade ago.

Ziad Takieddine is wanted by France and was arrested in Lebanon on Friday, based on an Interpol notice. He was ordered released by Lebanon’s prosecutor general, Ghassan Oweidat, but banned from traveling and his passport was confiscated. It’s unclear if Takieddine is using a French or Lebanese passport when traveling.

Sarkozy has been under investigation since 2013 for alleged illegal financing of his 2007 presidential campaign by the regime of late Libyan dictator Moammar Gadhafi. Takieddine, the main accuser in the case, initially said he personally delivered suitcases from Libya containing 5 million euros ($6.2 million) in cash to Sarkozy and his former chief of staff.

But last month, Takieddine — four years after his accusations were made public in French media — told French BFM TV, speaking from Lebanon, that “it’s not true. … there was no financing of Sarkozy presidential campaign.”

He did not elaborate and it was not immediately clear why Takieddine changed his story. But his public comments prompted Sarkozy to ask investigators to drop the charges against him and vowed to sue Takieddine for defamation.

Investigators are examining claims that Gadhafi’s regime secretly gave Sarkozy a total of 50 million euros in the 2007 French campaign. The sum would be more than double the legal campaign funding limit at the time — 21 million euros — and would violate French rules against foreign campaign financing.

Takieddine is reported to be an arms dealer between France and several Middle Eastern countries. He fled France after he was sentenced earlier this year for receiving illegal commissions in arms deals with Saudi Arabia and Pakistan in 1994, a case known as the “Karachi Affair.” 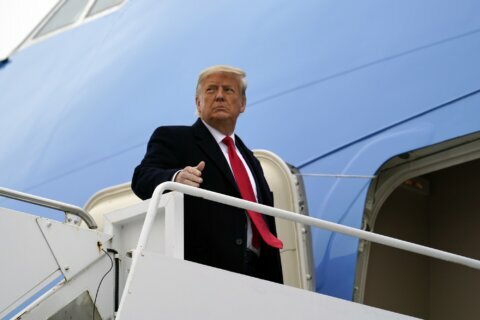