US Navy searches for missing Nimitz sailor in Arabian Sea

The U.S. Navy searched through the night into Monday morning for a sailor who went missing from the aircraft carrier USS Nimitz during its patrol of the northern Arabian Sea amid tensions with Iran.
Listen now to WTOP News WTOP.com | Alexa | Google Home | WTOP App | 103.5 FM

DUBAI, United Arab Emirates (AP) — The U.S. Navy searched through the night into Monday morning for a sailor who went missing from the aircraft carrier USS Nimitz during its patrol of the northern Arabian Sea amid tensions with Iran.

The crew aboard the Nimitz sounded a “man overboard” alert at 6:47 p.m. on Sunday, after being unable to find the sailor aboard the nuclear-powered aircraft carrier, said Cmdr. Rebecca Rebarich, a spokeswoman for the U.S. Navy’s Bahrain-based 5th Fleet. That was after an extensive search of the Nimitz, America’s oldest carrier in active service that carries some 5,000 sailors and Marines.

The Nimitz, the guided-missile cruiser USS Princeton and other 5th Fleet personnel continued their search on Monday, Rebarich said. She declined to identify the missing sailor, citing Navy policy.

The Nimitz, whose homeport is Bremerton, Washington, has been in the Arabian Sea since late July. It replaced the aircraft carrier USS Dwight D. Eisenhower, which had spent months in the Arabian Sea on its deployment that saw the carrier break the Navy’s previous at-sea record. Navy officials have limited port calls due to the ongoing coronavirus pandemic.

The Nimitz’s arrival in the Mideast saw Iran conduct a live-fire drill targeting a mockup aircraft carrier resembling it.

The drill underlined the lingering threat of military conflict between Iran and the U.S. after a series of escalating incidents last year led to an American drone strike that killed a top Iranian general in Baghdad. Tehran responded to that strike by firing ballistic missiles that wounded dozens of American forces in Iraq. 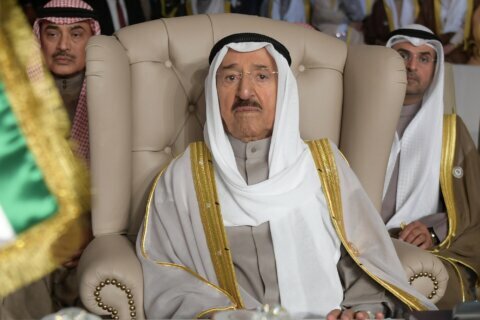