Trump is urged to intervene in trial of US-Saudi national

DUBAI, United Arab Emirates (AP) — The trial of a U.S. citizen who is also a Saudi national began Wednesday in Saudi Arabia in a counter-terrorism court that has been used to imprison rights activists in a case that could spark further tensions in already uneasy U.S.-Saudi relations.

The case of Salah al-Haidar, who has been detained since April 2019 in Saudi Arabia, has caught the attention of members of Congress who are urging President Donald Trump to personally seek his immediate and unconditional release.

Al-Haidar, who has a family home in Vienna, Virginia, is facing between eight and 33 years in prison for alleged Twitter posts criticizing the Saudi government, according to people with knowledge of his case, including a U.S. official familiar with the case who insisted on anonymity to discuss it with The Associated Press.

Although the trial began Wednesday, people with knowledge of the case said they were originally told it would begin Thursday. It was not immediately clear how the misunderstanding took place

People with knowledge of the case, who spoke anonymously in order to discuss the matter without repercussion, said al-Haidar’s lawyer and a sibling were present for the opening court session. Judges heard his defense as well as that of other defendants arrested on similar charges around the same time. The next court date was set two months from now. U.S. embassy officials were not present inside the courtroom, the people said.

Al-Haidar’s mother is prominent Saudi women’s rights activist Aziza al-Yousef, who is among nearly a dozen women on trial for charges related to their activism, such as pushing for the right to drive before the ban on women was lifted in mid-2018. Al-Yousef, a grandmother and former university professor, was released from prison the week before her son’s arrest. She and others have told a Saudi criminal court they were abused during interrogations, including being waterboarded, beaten with canes and electrocuted. She has been barred from leaving the kingdom, despite holding permanent residency in the U.S.

The crackdown on perceived critics of the government has intensified under Crown Prince Mohammed bin Salman, who continues to face criticism over the killing of Saudi critic Jamal Khashoggi inside the Saudi Consulate in Istanbul in late 2018. Since Khashoggi’s murder, the imprisonment of the women activists and others in Saudi Arabia has drawn widespread condemnation from members of Congress, the British Parliament and others.

Representatives of a congressional delegation in Virginia, where al-Haidar has immediate family, are pressing the U.S. State Department to send personnel to observe his trial and to ensure transparency to the extent that the Saudis permit it, the U.S. official said.

Virginia Sen. Tim Kaine, a member of the Near East, South Asia, Central Asia, and Counterterrorism subcommittee, and Democratic Congressman Gerald E. Connolly, who sits on the Committee on Foreign Affairs and its subcommittee on the Middle East, asked Trump in a letter Wednesday to raise al-Haidar’s case “with the highest levels” of the Saudi government. They said they believe his arrest is a targeted effort against the family because of their advocacy for social reforms.

“We urge you to secure the unconditional and immediate release of Mr. al-Haidar and facilitate his and Ms. al-Yousef’s return to the United States. We also urge you to do the same for all other U.S. citizens being held in Saudi prisons over allegations relating to peaceful dissent,” the Virginia representatives said in the letter, which was also addressed to the Saudi Ambassador to the U.S., Princess Reema bint Bandar.

The Trump administration has been criticized by Democrats for not pressing Saudi Arabia enough on its human rights record, instead prioritizing lucrative Saudi weapons deals and the kingdom’s tacit support for Gulf Arab normalization with Israel.

The Saudi Embassy in Washington did not immediately respond to an AP request for comment on the case.

The Specialized Criminal Court in Riyadh presiding over his trial is notorious for its secretive nature. According to a 53-page report released earlier this year by Amnesty International, the court has been used as “a weapon of repression” to imprison peaceful critics, activists, journalists, clerics and minority Shiite Muslims, including some who were sentenced to death and executed.

A range of cases are brought before the court under broadly worded counter-terrorism laws that criminalize acts such as insulting the government and “disobeying the ruler.”

The government contends that the specialized court follows the same rules and procedures of other criminal courts and that defendants, their lawyers and families can be present during hearings. However, Amnesty International said it had documented numerous cases of trials held in secret. Attempts at appealing the court’s judgements were further conducted behind closed doors, without the presence or participation of defendants or their lawyers.

A person with knowledge of the case said al-Haidar had not been allowed to meet with his lawyer to discuss the charges before his trial opened.

Al-Haidar, 35, has been imprisoned since his arrest 17 months ago in Saudi Arabia, where his wife and two-year old son reside. 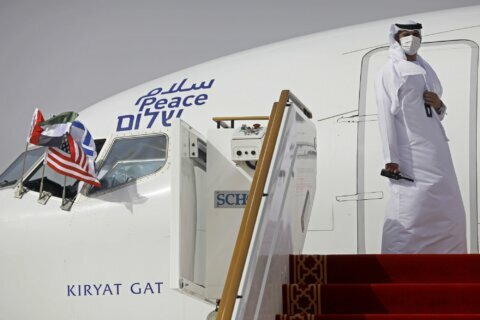