Beirut residents determined to save heritage lost to blast

BEIRUT (AP) — For the past decade, art collector Nabil Debs has been working on turning his 19th century ancestral home in a historic neighborhood of Beirut to a hotel and art gallery. He planned to open it to the public in mid-August.

Within seconds, his lifelong dream came crashing down, along with the two-story building’s stone facade and front balcony as a massive explosion tore through Beirut, shearing off facades, blasting holes in buildings, doors, stones and shattering glass across the capital.

The Aug. 4 blast resulting from nearly 3,000 tons of improperly stored ammonium nitrates igniting at the port of Beirut killed more than 180 people and wounded nearly 6,000. It also damaged thousands of buildings, including dozens of charming Ottoman and French mandate-era structures which had been among the few survivors of a years-old construction frenzy replacing traditional houses with modern buildings. They include old homes, restaurants, museums and churches.

In the streets of two Beirut historic neighborhoods, Gemmayzeh and Mar Mikhael, workers are erecting scaffolding to support buildings that have stood for more than a century – now at risk of collapse.

Among them is the house of Debs, who says he is more determined to go ahead with his project, called Arthaus, that consists of 25 rooms. Days after the explosion, after he’d recovered from the shock and workers started renovation works. Now he plans the inauguration for mid-September.

“We have been working on this project for the last 10 years. For us it is a labor of love,” said Debs, standing in a yard between his ancestral red-brick house, which was built in 1860, and another family home built in 1780. “We love the project, we love Beirut and we love Lebanon and that’s what we are.”

The day of the blast, Debs was at the house. He stepped outside into the backyard with a friend who wanted to smoke a cigarette. They were lucky. Had they gone to the front, the whole facade would have fallen on them. They miraculously escaped without a scratch.

“It was a horror story,” Debs said.

He estimates his losses to be at least $250,000 and could reach $1.5 million, as some art pieces including sculptures were damaged.

Naji Raji, an activist and spokesman for Save Beirut Heritage, said the blast damaged more than 600 historic buildings in Beirut, of which about 40 are at risk of collapse. He said out of the 40 buildings, work has begun to support 17 of them. Raji said some estimates put the cost of renovating old buildings at about $300 million.

The renovation work is being carried out by the Beirut Heritage Initiative, a coalition that includes among others the U.N. culture agency UNESCO, the French embassy and the architects syndicate, Raji said. The state is largely absent, apart from producing licenses for work.

Many of the buildings destroyed in the blast were proud holdouts. Since the end of the 15-year civil war in 1990, many old buildings have been demolished and replaced by modern high rises, as speculators stepped in to make fortunes. Since the blast occurred there have been reports of middlemen scouting destroyed neighborhoods and making offers to buy old buildings.

That appears to have provoked a determination by owners to save their buildings.

A giant banner placed on a damaged historic building reads in Arabic and English: “We are staying.” Another banner hanged on a street in Gemmayzeh reads: “Our history is not for sale.”

“National heritage should be protected. It is very important heritage for the identity of the country,” UNESCO’s chief Audrey Azoulay told journalists in Beirut on Thursday. She added that UNESCO launched a campaign titled “Li Beirut,” or for Beirut, and called on states, the private sector and individuals to donate money.

She called for preserving the historic districts of Beirut through laws that prevent selling buildings by taking advantage of weak owners.

Earlier this month, caretaker Finance Minister Ghazi Wazni issued a decree preventing the sale of any historic building without permission from the Culture Ministry, a move that aims to prevent “exploitation.”

In Gemmayzeh, Aida Qazoun, 80, moved around her four-room apartment on the ground floor of a century-old three-story building as workers fixed broken windows and cemented holes in the walls.

She returned from her son’s home in the mountains, where she moved for two weeks after the blast along with her daughter who suffered an arm injury from flying glass and who also returned home.

“I got married and moved into this apartment 60 years ago. I will stay here,” said Qazoun as she prepared a pot of Arabic coffee for the workers to take a rest during a hot and humid summer day. 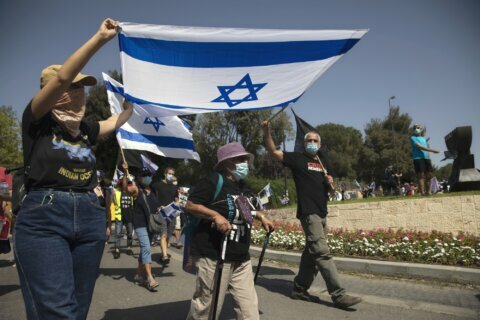