CAIRO (AP) — The U.S. military on Wednesday accused Russian mercenaries fighting on the side of eastern Libya forces of planting land mines and improvised explosive devices in and around the Libyan capital, Tripoli.

The U.S. Africa Command, or AFRICOM, said verified photographic evidence shows “indiscriminately placed booby traps and minefields” around the outskirts of Tripoli and all the way east toward the strategic coastal city of Sirte since mid-June.

There was no immediate comment from Russia or the Wagner Group, a Kremlin-backed private security company that has been implicated in the conflict in the North African country. Moscow has repeatedly denied playing any role on Libya’s battlefields.

AFRICOM said it assessed that the Kremlin-backed company introduced the weapons into Libya. It posted photos of improvised explosive devices and a concealed anti-personnel mine, allegedly found in a residential area in Tripoli.

Libya was plunged into chaos when a NATO-backed uprising in 2011 toppled longtime dictator Moammar Gadhafi who was later killed. The country is now split between a government in the east, allied with military commander Khalifa Hifter, and one in Tripoli, in the west, supported by the United Nations.

Hifter’s self-styled forces launched an offensive to capture Tripoli last year, clashing with militias loosely allied with the government there. Hifter is backed by the United Arab Emirates, Egypt and Russia, while the Tripoli forces are aided by Turkey, Qatar and Italy.

In the past three months, Hifter’s forces have lost almost all areas taken in the offensive on Tripoli as Turkey stepped up military support for his rivals and brought Syrian mercenaries, including militants, to fight in Libya.

“The Wagner Group’s irresponsible tactics are prolonging conflict and are responsible for the needless suffering and the deaths of innocent civilians,” said Marine Maj. Gen. Bradford Gering, director of operations at the U.S. Africa Command.

U.N. experts have said the Wagner Group provided between 800-1,200 mercenaries to bolster Hifter’s offensive on Tripoli, paying some fighters up to $1,500 a month.

Both sides in Libya’s civil war have been mobilizing for weeks for battle for the city of Sirte. Hifter’s forces took Sirte, Gadhafi’s birthplace and a former stronghold of the Islamic State group, in January.

Retaking Sirte would give Tripoli forces a chance to gain control of oil fields and facilities in the south that Hifter had earlier seized.

But Egypt, a Hifter ally, warned last month that an attack on Sirte would trigger an Egyptian military intervention, allegedly to protect Egypt’s western border. Libya’s east-based Parliament has called on Egypt to send troops if Sirte is attacked. 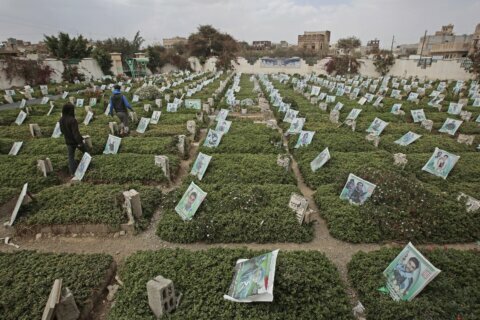