CAIRO (AP) — Forces allied with the U.N.-supported government in Libya’s capital said Friday they have retaken another key western town from rivals behind a year-long offensive on Tripoli. The development is yet another illustration of how Turkey’s support for the Tripoli government has turned the tide of war in the oil-rich country.

According to Mohamed Gnono, the spokesman for the Tripoli-allied forces, the Turkey-backed units have entered the town of Tarhouna, 72 kilometers (45 miles) southeast of Tripoli.

Tarhouna served as a main stronghold for commander Khalifa Hifter’s east-based forces in their campaign to capture Tripoli from the west-based Government of National Accord. Hifter, who leads the self-styled Libyan Arab Armed Forces, launched his offensive in April last year.

A spokesman for Hifter’s forces, Ahmed al-Mosmari, said at a press conference late on Friday that their fighters withdrew from Tarhouna after facing intense Turkish bombardment. He framed the retreat as a strategic decision to keep heavy fighting outside the city’s populated civilian districts. He also would not declare the end of Hifter’s assault, vowing, “the battles are not finished, they will continue.”

The retaking of Tarhouna followed other front-line successes of the militias allied with the U.N.-supported but weak Tripoli government. On Thursday, they said they regained control of all of Tripoli’s entrance and exit points, and the day before, they said they took back the Tripoli airport.

U.N. spokesman Stephane Dujarric said on Friday that the United Nations’ “concern remains with the impact of the continued violence on civilians as well as the knock-on impact in forcing further displacements of civilian population.”

Later Friday, the U.N. Security Council voted unanimously to extend the arms embargo on Libya for a year.

U.N. Secretary-General Antonio Guterres has strongly criticized violations of the embargo by foreign governments supporting the rival parties. The government in Tripoli is backed by Turkey, which deployed troops and mercenaries to help defend the capital in January, as well as by Italy and Qatar. Hifter’s offensive is supported by France, Russia, Jordan, the United Arab Emirates and other key Arab countries.

Turkey has boosted its support for the Tripoli-allied militias in recent months, sending drones and other military hardware, along with thousands of Syrian mercenaries, many of them with links to militant groups. This has enabled the Tripoli forces to take back almost all the towns and territories around the Libyan capital that Hifter’s side had taken previously.

Even if U.N.-brokered cease-fire talks get underway, it is the foreign players in the Libyan conflict that will determine its fate. Hifter’s forces are supported by France, Russia, Jordan, the United Arab Emirates and other key Arab countries. Along with Turkey, the government in Tripoli is backed by Italy and Qatar.

Libya has been in turmoil since 2011 when a civil war toppled long-time dictator Moammar Gadhafi, who was later killed. The country has since split between rival administrations in the east and the west, each backed by armed groups and foreign governments.

Amnesty International, meanwhile, said both sides may have committed war crimes in the latest surge of fighting around Tripoli.

The London-based rights group said it obtained new evidence indicating “that war crimes and other violations may have been committed” since mid-April, “including, looting, indiscriminate attacks, and the planting of anti-personnel landmines in civilian buildings.”

“Civilians in Libya are once again paying the price,” said Amnesty’s regional director, Diana Eltahawy, adding that all parties in the fighting are “showing utter disregard for the laws of war and lives of civilians.”

Amnesty cited eyewitnesses describing looting by armed groups of civilian houses and public buildings in an array of towns near Tripoli — Sabratha, Surman and al-Asabaa — after they had been retaken from Hifter’s forces earlier this year and in the case of al-Asabaa, earlier this month. 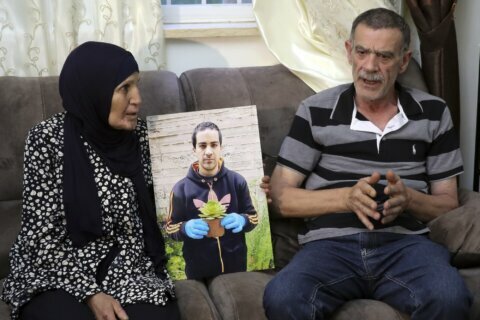