Key moments in the 1979 Iran hostage crisis at US Embassy 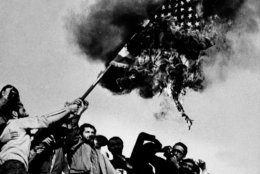 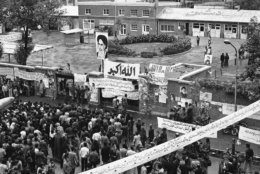 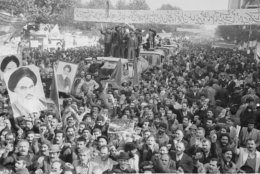 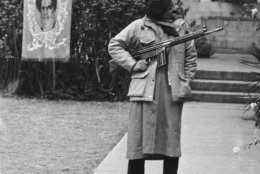 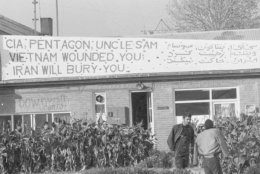 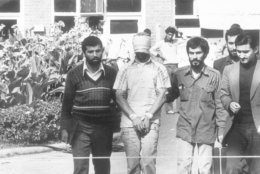 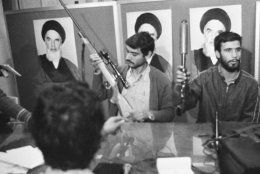 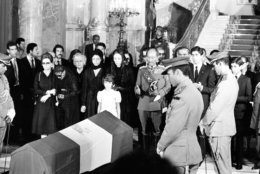 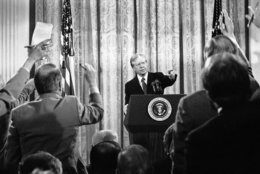 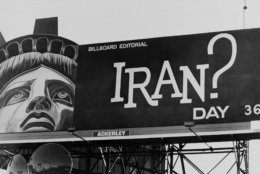 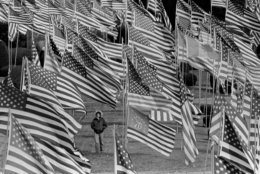 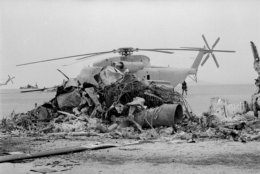 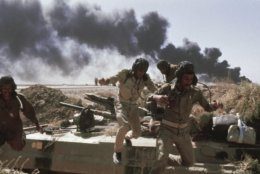 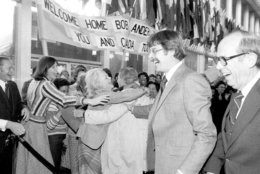 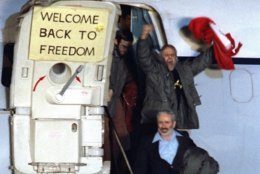 Here are key moments in the 1979 Iranian takeover and subsequent 444-day hostage crisis at the U.S. Embassy in Tehran.

Day 1, Nov. 4, 1979 – Iranian protesters seize the U.S. Embassy in Tehran and take 98 people hostage. They demand the United States return the deposed Shah Mohammad Reza Pahlavi, who is in a New York hospital. The U.S. refuses. Khomeini called the takeover “a revolution bigger than the first revolution” that had toppled Iran’s monarchy that February.

Day 2, Nov. 5 – Other followers of Ayatollah Ruhollah Khomeini, the Iranian leader, seize the British Embassy in Tehran, claiming Britain is America’s “evil” ally. But they give it up hours later.

Day 5, Nov. 8 – Militants at the U.S. Embassy claim documents found in the embassy prove the American diplomatic personnel were part of an “espionage unit.”

Day 10, Nov. 13 – The Iranian government calls for a U.N. Security Council meeting to discuss its complaints against the United States.

Day 11, Nov. 14 – All Iranian assets in the United States are frozen on Carter’s orders.

Day 14, Nov. 17 – Khomeini orders the militants to release all women and black hostages if they are absolved of espionage.

Day 16, Nov. 19 – Three of the hostages – two black Marines and a female secretary – are released.

Day 19, Nov. 22 – Five non-American hostages are freed from the U.S. Embassy in Tehran.

Day 25, Nov. 28 – Abolhassan Bani-Sadr, considered a moderate on the hostage issue after having said he didn’t believe they should be held indefinitely, is replaced as foreign minister by Sadegh Ghotbzadeh, who advocates releasing the Americans only after the shah is returned.

Day 34, Dec. 7 – In Paris, the shah’s 34-year-old nephew, Shahriar Mustapha Chafik, is shot and killed on the street.

Day 42, Dec. 15 – The shah flies to “temporary” exile in Panama. The International Court at The Hague orders Iran to free all the hostages.

Day 58, Dec. 31 – By a vote of 11-0, with four abstentions, the U.N. Security Council approves a resolution giving Iran until Jan. 7 to release the hostages or face possible sanctions. The hostages aren’t released.

Day 71, Jan. 13, 1980 – Ten of 15 Security Council members vote in favor of economic sanctions against Iran but the Soviet Union, as a permanent member, vetoes the resolution. The United States decides on sanctions of its own.

Day 72, Jan. 14 – Iran’s Revolutionary Council orders all U.S. news correspondents to leave Iran because of what it calls their “biased reporting.”

Day 87, Jan. 29 – It is disclosed that six Americans, who escaped capture when the U.S. Embassy was seized Nov. 4, had slipped out of Iran with help of the Canadian Embassy, which issued them false identities. Decades later, the U.S. acknowledged the CIA’s role in their escape, which was the subject of the 2012 film “Argo.”

Day 142, March 24 – Looking haggard, the shah arrives in Egypt where he began his exile in January 1979 and is greeted by President Anwar Sadat, who says he can stay permanently. The shah enters a Cairo hospital.

Day 146, March 28 – The shah undergoes surgery for the removal of his spleen.

Day 156, April 7 – Khomeini rules the hostages must remain in the hands of the militants. In response, the United States breaks diplomatic relations with Iran, expelling 35 diplomats remaining in the country and imposing a series of economic sanctions. Iran’s army is put on alert after forces of neighboring Iraq attack an Iranian border post and nearby oil facilities. Iran orders its diplomats home from Iraq.

Day 158, April 8 – An angered Khomeini calls the United States “bloodthirsty” but tells his people the U.S. break in relations and other actions are a “good omen” because they mean the U.S. has lost all hope of controlling Iran. Bani-Sadr says, however, “I tell the nation, it is a war.”

Day 158, April 9 – As Washington hints of a possible naval blockade of Iran, the militants say they will burn the U.S. Embassy and kill the hostages if the United States tries “even the smallest” military move against Iran.

Day 165, April 16 – A senior U.S. official says Iran has until mid-May to end the deadlock or face possible military pressure.

Day 166, April 17 – President Carter imposes more economic sanctions on Iran, bans travel there by Americans except news correspondents and says military action could be the next step if the hostages are not released.

Day 174, April 25 – The White House announces a U.S. military force flew to a remote desert in Iran in hopes to carrying out a rescue of the hostages in Tehran but the plan had to be aborted because of the failure of three helicopters. Eight American servicemen are killed in a ground collision of a C-130 and a helicopter as the aircraft were preparing to leave the area.

Day 175, April 26 – Iran announces the hostages are being moved from the U.S. Embassy to other parts of Tehran and to other Iranian cities to foil another U.S. rescue effort. Iranians recover the bodies of the eight Americans killed on the rescue mission.

Day 182, May 3 – The U.S. hostages complete a half year in captivity. Iran arranges for the return of the bodies of Americans killed in the aborted rescue mission.

Day 203, May 24 – The International Court of Justice calls for release of the hostages and says Iran should compensate the United States for the seizure. Iran dismisses the ruling.

Day 224, June 14 – Khomeini announces a Cultural Revolution “to finish the enemies of God,” wipe out remnants of Iranian life as it was under the shah and put Islamic clergymen in charge of education.

Day 238, June 28 – The shah is reported in “very serious” condition in a Cairo hospital, suffering from pneumonia which resulted from chemotherapy for his cancer condition.

Day 243, July 3 – The shah again is described as being in serious condition in Cairo. His affliction this time is reported as a typhoidal infection.

Day 258, July 18 – An attempt is made in Paris to assassinate Shahpour Bakhtiar, the last Iranian prime minister under the shah and leader of an anti-Khomeini exile movement. Bakhtiar is unharmed but a French policeman and woman neighbor are killed.

Day 267, July 27 – The shah dies in a Cairo military hospital. Tehran rejoices but U.S. officials express doubt the death will speed the release of the hostages.

Day 269, July 29 – The shah is buried in a Cairo mosque after a state funeral attended by President Sadat and former President Richard Nixon, there in a private capacity.

Day 288, Aug. 17 – Britain temporarily closes its embassy in Tehran “as a precautionary measure” because of tensions over the arrests of Iranian demonstrators in London. Eight of the embassy’s diplomatic personnel leave Iran.

Day 299, Aug. 28 – Amnesty International, the London-based human rights organization, says its investigations indicate that more than 1,000 people were executed in the first 18 months of the Islamic Revolution.

Day 311, Sept. 9 – Britain closes its embassy in Tehran, fearing retaliation by Iranians who claim Iranians were ill-treated in London.

Day 314, Sept. 12 – Khomeini lists four conditions for the hostages’ release but omits a previous demand for a U.S. apology. The conditions: return of the late shah’s wealth, cancellation of U.S. claims against Iran, unfreezing of Iranian funds in the United States and U.S. guarantees of no interference in Iran. Washington’s immediate reaction is guarded.

Day 324, Sept. 22 – Iraq says the border hostilities have become a “full-scale war.” It launches air attacks on at least seven Iranian air installations, including one in Tehran.

Day 330, Sept. 28 – U.N. Security Council votes unanimously to call for a halt to the fighting between Iraq and Iran.

Day 363, Oct. 31 – Radio Tehran says Iran has been victorious in the hostage crisis and a “just method” for freeing the captives has been worked out. A Swedish airliner is reported on standby to fly the Americans from Tehran. The White House continues to caution against over-optimism.

Day 365, Nov. 2 – Parliament votes to free the hostages if the United States meets conditions set by Khomeini and a parliamentary committee: Release of Iranian assets frozen in U.S. banks, return of the late shah’s wealth, withdrawal of lawsuits pending against Iran and a U.S. pledge of non-intervention in Iranian affairs. President Carter says the terms “appear to offer a positive basis” for negotiations.

Day 366, Nov. 3 – With Ayatollah Khomeini’s approval, the militants relinquish “responsibility” for the hostages to the Iranian government. U.S. officials call it a major breakthrough.

Day 367, Nov. 4 – Tens of thousands of Iranians demonstrate outside the U.S. Embassy to mark the first anniversary of its capture. Iran’s Foreign Ministry demands a quick Carter administration response to Iran’s terms for the hostages’ release. Ronald Reagan defeats President Carter in a landslide vote.

Day 373, Nov. 10 – Deputy Secretary of State Warren Christopher leads a party of Americans to Algiers and delivers the U.S. hostage reply to Algerian envoys who will relay it to Tehran.

Day 414, Dec. 21 – Iran announces the United States must deposit with the Algerians the equivalent of $24 billion in cash and gold representing its estimate of the shah’s wealth and frozen Iranian assets – before the hostages are released. The U.S. calls the demand “unreasonable.”

Day 427, Jan. 3, 1981 – Radio Tehran says it is “totally improbable” the hostages will be freed before Reagan’s inauguration and that even after that the issue “will remain as it is now, at an impasse,” unless the United States meets Iranian demands.

Day 428, Jan. 4 – The Iranian government claims it now has full control of the 52 hostages, who had been under the control of the militants who seized them.

Day 440, Jan. 16 – A U.S. Air Force jet flies U.S. and British bankers to Algiers to work out with American negotiators already there the financial arrangements sought by Iran. The United States sends the draft of a proposed agreement to Iran and the White House says if it is accepted the hostages could be free before Carter leaves office.

Day 442, Jan. 18 – Iran announces acceptance of agreement for the release of the hostages. Final details are worked out in Algeria for the transfer of Iranian funds frozen by the United States. Plans are made to fly the hostages to West Germany.

Day 443, Jan. 19 – The release of the hostages is delayed by complications in financial aspects of the U.S.-Iran agreement.

Day 444, Jan. 20 – The financial complications are resolved and the hostages are released as Reagan takes office as president.

Jared Kushner to travel to Saudi Arabia, Qatar this week