As rockets rain down, Israel intensifies its strikes in Gaza

Israeli airstrikes killed more Islamic Jihad militants in Gaza on Wednesday as rocket fire toward Israel resumed after a brief overnight lull, raising the death toll in the strip to 18 Palestinians in the heaviest round of fighting in months.
(1/17) 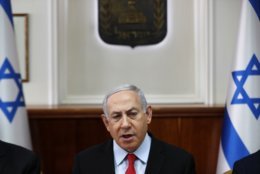 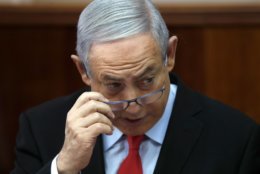 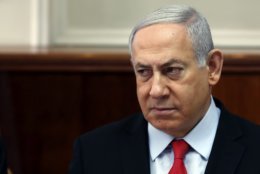 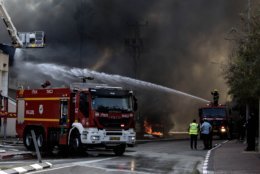 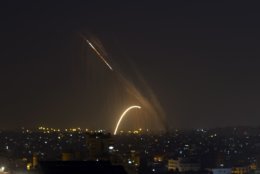 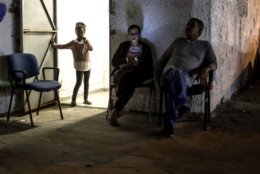 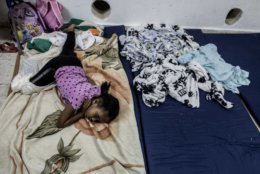 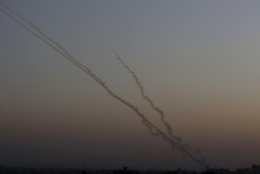 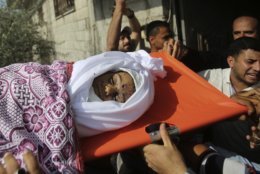 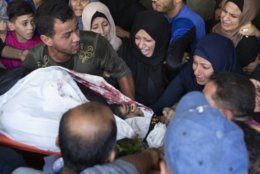 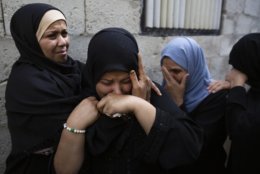 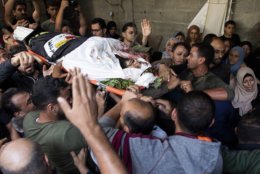 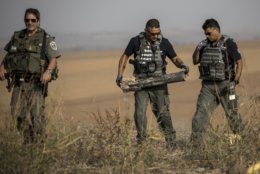 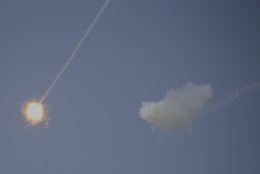 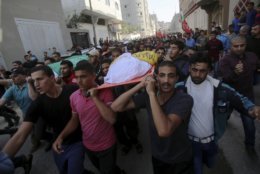 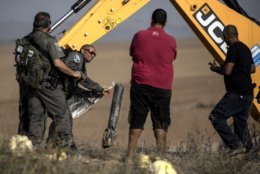 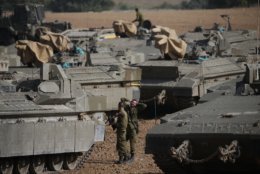 GAZA CITY, Gaza Strip (AP) — Israeli aircraft struck Islamic Jihad targets throughout the Gaza Strip on Wednesday while the militant group rained scores of rockets into Israel for a second straight day as the heaviest round of fighting in months showed no signs of ending. The death toll rose to 32 Palestinians, including a 7-year-old boy and two other minors.

The dead included six Palestinians from a single family who were killed in an Israeli airstrike at their house in Deir al-Balah town, central Gaza Strip, early Thursday, the health ministry said. It was the deadliest incident since the beginning of the current fighting.

The U.N.’s Mideast envoy, Nickolay Mladenov, rushed to Cairo to work with Egyptian mediators on arranging a truce. An Islamic Jihad delegation was also expected in Egypt “very soon,” an Egyptian intelligence official said, speaking on condition of anonymity because he was not authorized to talk to the media.

“I am very concerned about the ongoing and serious escalation between Palestinian Islamic Jihad and Israel,” Mladenov said. “The U.N. is working to urgently de-escalate the situation.”

Islamic Jihad leader Ziad al-Nakhalah said in an interview late Wednesday that his group was ready for a cease-fire if Israel accepted “conditions,” including a halt to targeted killings of Palestinian militant leaders.

“If we reach an agreement, I can even announce a cease-fire over the phone,” he said.

The fighting erupted early Tuesday after Israel killed a senior commander in the Islamic Jihad militant group, along with his wife, as they slept in their Gaza home. Israeli officials say Bahaa Abu el-Atta was responsible for numerous rocket attacks and was plotting a large-scale border infiltration.

Islamic Jihad, an Iranian-backed militant group sworn to Israel’s destruction, responded by launching dozens of rockets toward Israel, some reaching as far as Tel Aviv, prompting Israel to carry out scores of airstrikes.

The rocket fire brought much of Israel to a standstill. Schools closed throughout southern Israel, people stayed home from work and large public gatherings were banned. Air raid sirens wailed during the day and into the evening. By Wednesday night, the army said 360 rockets had been fired at Israel.

In Gaza, schools and public institutions also were closed for a second day and there were few cars on the streets, with people mostly staying indoors. After nightfall, Gaza City resembled a ghost town, with streets empty and the whooshing sounds of outgoing rockets and explosions of Israeli airstrikes heard. Virtually the only vehicles on the roads were wailing ambulances.

In a scene that could fuel more violence, phone video shot by someone living nearby being circulated on social media showed neighbors and emergency workers frantically digging through the debris in search of bodies following the Thursday morning strike. Those killed included children, according to the health ministry in Gaza. Twelve people were also wounded.

Hamas, the larger and more powerful militant group that controls Gaza, has so far avoided entering the fray — a possible sign the violence could be brief.

Hamas, which has fought three wars with Israel, has a much more lethal arsenal than Islamic Jihad. But as the governing authority in the territory, it also is more pragmatic and appears to have little desire for more fighting at a time when Gaza’s economy is in tatters.

That could change if the fighting drags on and the death toll continues to climb. Palestinian health officials reported 26 dead from Israeli airstrikes, including at least 16 militants. Five civilians, including a woman and boys ages 17, 16 and 7, were among the dead. The identities of the others killed were not immediately known.

In the southern town of Khan Younis, the military fired a nonexplosive warning shot at the two-story home of the Zourob family late Tuesday to make them evacuate. Israel says the tactic, known as a “knock on the roof,” is meant to minimize casualties before a target is hit.

On Wednesday, Najab Zourob sat on the debris of her former home, next to a bomb crater, as her children tried to salvage belongings. She said she had no idea why their house had been targeted. “We don’t have any relations with any factions,” she said.

Lt. Col. Jonathan Conricus, an Israeli military spokesman, said the army was limiting its strikes to Islamic Jihad targets and avoiding conflict with Hamas to prevent an escalation.

“However, it’s very clear that if there will be Israeli casualties, the situation would change drastically and we would be forced to respond in a different manner,” he said.

No Israeli deaths were reported, in part because of Israel’s Iron Dome defense system, which the military said has a 90% success rate when deployed.

A few homes suffered direct hits, though, and there was a near miss on a major highway, where a rocket crashed just after a vehicle passed. In all, three people suffered slight wounds from shrapnel or shattered glass caused by rocket fire, medical officials said.

Israel’s strikes against Islamic Jihad marked the latest manifestation of a spreading battle between Israel and Iranian proxies in the region.

Iran has forces based in Syria, Israel’s northern neighbor, and supports Hezbollah militants in Lebanon. In Gaza, it supplies Islamic Jihad with cash, weapons and expertise.

Netanyahu also has claimed Iran is using Iraq and far-off Yemen, where Tehran supports Shiite Houthi rebels at war with a Saudi-led coalition backing the government, to plan attacks against Israel. Hamas also receives some support from Iran.

Israel frequently hits Iranian interests in Syria. But on Tuesday, Syrian officials said an Israeli airstrike targeted a senior Islamic Jihad militant in Damascus, a rare assassination attempt of a Palestinian militant in the Syrian capital. Israel did not comment on the airstrike, which missed the militant but killed two of his relatives.

Despite the disruption to daily life, there appeared to be widespread support in Israel for the targeting of Abu el-Atta.

Still, some opposition figures suggested the timing could not be divorced from the political reality in Israel, where Netanyahu leads a caretaker government while his main challenger, former military chief Benny Gantz, is trying to build his own coalition government.

With their parties unable to secure parliamentary majorities following a September election, the two rivals have both come out for a unity government. But each demands to be its leader, leaving political paralysis.

The Gaza fighting could force them into a partnership. Gantz has praised the airstrike, saying he was briefed ahead of time and has continued to receive updates.

A successful military operation could bolster Netanyahu as he seeks to retain power — especially if he is indicted on corruption charges.

Israel’s attorney general is to decide in the weeks ahead whether to indict Netanyahu, which would increase pressure on him to step down. He has sought to portray himself as being the most capable of steering the country through its many security challenges. 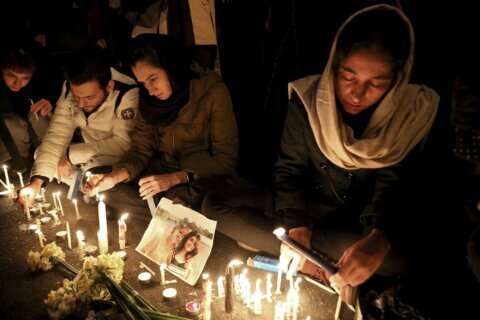 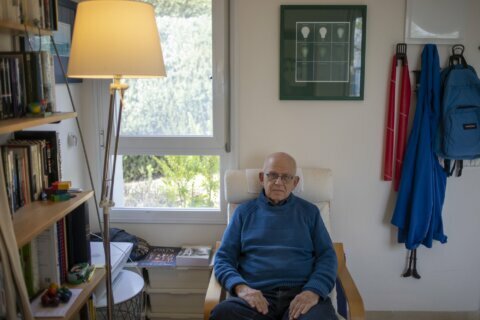