SANAA, Yemen (AP) — Forces loyal to Yemen’s internationally recognized government on Saturday took control of a headquarters and at least three military camps from a separatist militia backed by the United Arab Emirates in and outside a key southern city, military officials and the government said.

The development came a day after government forces of Saudi-backed President Abed Rabbo Mansour Hadi took full control of the city of Ataq, the capital of oil-rich Shabwa province, following clashes with a UAE-trained militia known as the Elite Force.

The Elite Force is part of the secessionist Southern Transitional Council, which launched an offensive earlier this month to take strategic southern areas from government forces, including the city of Aden and nearby Abyan province.

The fighting between the two sides — a subplot within a broader narrative in which they are ostensibly allies in a Saudi-led coalition fighting Yemen’s Iran-backed Houthi rebels in the north — has added another layer to the complex civil war in the Arab world’s most impoverished country.

The UAE is a key member of the coalition. It is the dominant force in Yemen’s south, where it has an estimated 90,000 allied militiamen and has long been at odds with the government, which is currently largely based in Saudi Arabia.

After Yemeni government forces seized control of Ataq on Friday, they attacked military camps of the Elite Force west of the city, seizing control of three camps and the militia headquarters, according to statement from Hadi’s government.

Military officials said government forces have started to fortify the city and set up checkpoints on the major roads outside Ataq. The city previously was divided between Hadi’s forces and the militia.

Meanwhile, military officials said armed men attacked a convoy of another UAE-trained militia known as the Security Belt, in Mahfad district in the province of Abyan, as they were heading to Ataq to aid their allies there.

The Security Belt militia is also trained and financed by the UAE. The militia have overrun military camps and government buildings in Abyan and Adan.

No group immediately claimed responsibility for the attack in Mahfad, but the officials said it was likely carried out by al-Qaida militants.

The officials spoke on condition of anonymity because they were not authorized to talk to the media.

Mahfad is a stronghold for militants from al-Qaida in the Arabian Peninsula, the most dangerous branch of the terror network, and the Islamic State group’s Yemen offshoot. The officials spoke on condition of anonymity because they weren’t authorized to talk to the media, while the residents spoke anonymously, fearing reprisal.

The fighting between the government forces and the southern separatists began earlier this month following the funeral of a separatist leader killed in a Houthi rocket attack.

After his funeral in Aden, the separatists attacked the nearby presidential palace. At the time, Hani Bin Braik, a separatist leader and former Cabinet minister, called for the overthrow of the government.

The crisis has cast doubt on the cohesiveness of the Saudi-led coalition and adds another complexity to Yemen civil war, triggered by the Houthi takeover the capital, Sanaa, in 2014.

The war has killed tens of thousands of people and has created the world’s worst humanitarian crisis. 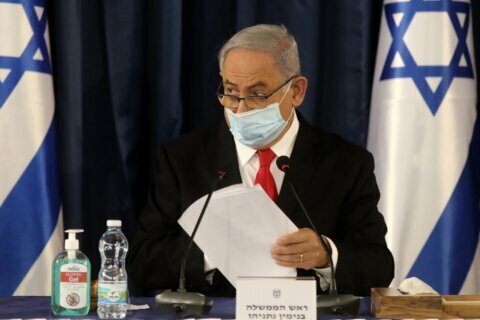 Israeli PM: Killing of Palestinian with autism a “tragedy”