BAGHDAD (AP) — Two unidentified drones killed two Iraqi members of an Iran-backed paramilitary force on Sunday, the group said in a statement, saying the attack took place in Iraq near the border with Syria.

The statement issued by the force known as the Popular Mobilization Forces said the attack occurred in Anbar province near the Qaim border crossing with Syria. It said the attack targeted vehicles belonging to the Hezbollah Brigades faction, also known as Brigade 45.

Two officials from the Hezbollah Brigades, which is separate from the Lebanese group of the same name, confirmed the attack and said the vehicles were being used to transport weapons. The officials spoke on condition of anonymity because they were not authorized to speak to journalists about the matter.

Iraq’s Hezbollah Brigades operate under the umbrella of the state-sanctioned militias known collectively as the Popular Mobilization Forces, or PMF. Many of them are supported by Iran.

If confirmed, it would be the latest in a series of attacks that have targeted PMF bases and weapons depot in Iraq. U.S. officials have said that Israel was behind at least one of them.

No one claimed responsibility, and the PMF statement did not assign blame. 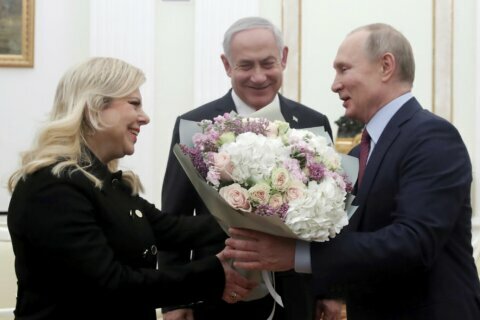