A nation slowly emerging from restrictions imposed by the coronavirus pandemic honored generations of U.S. veterans killed in the line of duty on a Memorial Day observed without the severe pandemic restrictions that affected the day of tribute just a year ago.
Listen now to WTOP News WTOP.com | Alexa | Google Home | WTOP App | 103.5 FM

A nation slowly emerging from social distancing measures imposed by the coronavirus pandemic honored generations of U.S. veterans killed in the line of duty on a Memorial Day observed without the severe pandemic restrictions that affected the day of tribute just a year ago.

Memorial Day parades and events were held in localities large and small across the country Monday, many resuming after being canceled last year as the pandemic hit with full force.

At Arlington National Cemetery’s Tomb of the Unknown Soldier, President Joe Biden delivered a solemn speech honoring the 1 million Americans killed in service of the nation — and challenged that nation to carry on that fight by defending its democracy.

“This nation was built on an idea,” Biden said. “We were built on an idea, the idea of liberty and opportunity for all. We’ve never fully realized that aspiration of our founders, but every generation has opened the door a little wider.”

This year’s remembrances were as painful, if less restrictive, as those held on Memorial Day 2020, when Americans settled for small processions and online tributes instead of parades. The pandemic last year forced communities to honor the nation’s military dead with modest, more subdued ceremonies that also remembered those lost to the coronavirus.

With restrictions lifting, Americans paid tribute in public gatherings this year — and like last year, they also remembered the thousands of veterans who died from COVID-19. Still, there were some vestiges: An early morning wreath laying ceremony at the National Memorial Cemetery of Arizona was shared virtually.

That wasn’t the case at a long-delayed veterans and airmen’s reunion in West Hills, California, a Los Angeles suburb where veterans gathered face to face for the first time Monday since their weekly reunions were shut down 14 months ago by the pandemic.

“This is a special group of veterans who are trying not to be homebound,” Ed Reynolds, a Vietnam War and Air Force veteran, told KTLA-TV. “It’s good to see these faces again. It’s sort of emotional,” he said, visibly emotional himself.

Reynolds said some 12 members of the group had died over the past year, though none of them from COVID-19.

For a select few, the Memorial Day weekend marked the final farewell, decades in the making, of the remains of fallen heroes from World War II. They included two Kentucky men — U.S. Navy Fireman 3rd Class Welborn L. Ashby, who was killed at 24, and U.S. Navy Seaman 2nd Class Howard Scott Magers, killed at 18 — who perished in the December 7, 1941, Japanese attack on Pearl Harbor. Some 2,403 Americans died in the attack.

Magers’ remains arrived in Barren County on Saturday after they were identified by the federal Defense POW/MIA Accounting Agency. He was laid to rest with full military honors, the Daily News reported.

A Memorial Day service was being held for Ashby in Beaver Dam, followed by burial at Centertown Cemetery with full military honors, including a “Missing Man” flyover by vintage planes.

In Tennessee, the body of U.S. Marine Capt. Glenn Walker, one of more than 1,100 Marines killed in the 1943 Pacific Battle of Tarawa, is coming home, his family told The Tennessean this weekend. The family plans a reunion and burial in July.

“I get emotional when I think of the life he could have had,” said Walker’s nephew Lane Martin. ”The good is that we’ve reached out to family all over the country and drawn us back together.”

“The depth of their devotion, the steel of their resolve, and the purity of their patriotism has no equal in human history,” Trump said in a statement posted on his website. About 20 miles north of Trump’s Mar-a-Lago compound in Palm Beach, Florida, flags bearing Trump’s name whipped in the breeze as dozens of boats held a Memorial Day parade along the waters of Jupiter.

In Denver, veterans and their families paid silent tribute among thousands of polished marble headstones, each meticulously adorned with an American flag, at Fort Logan National Cemetery — a scene marked at national cemeteries across the nation.

But in Southern California, authorities said a huge American flag and several smaller flags were stolen from Los Angeles National Cemetery over the weekend. The theft of the flag, which measures 25 feet by 200 feet (7.6 meters by 9.1 meters), “cannot detract in the slightest way from the honor and respect we pay on this Memorial Day to those service men and women who made the ultimate sacrifice for our nation,” said Les’ Melnyk, a spokesperson for the Department of Veterans Affairs’ National Cemetery Administration.

Monday’s commemorations were held as new data released by the U.S. Centers for Disease Control and Prevention suggest that new cases of COVID-19 are plunging and that more than 40% of the U.S. population has been fully vaccinated. With the declines, most states have been reducing or dropping most social distancing restrictions. 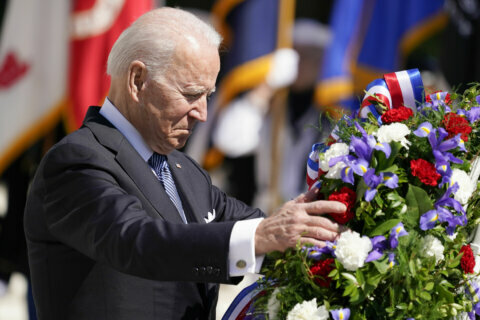 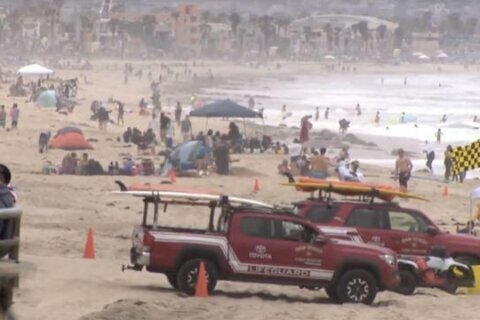 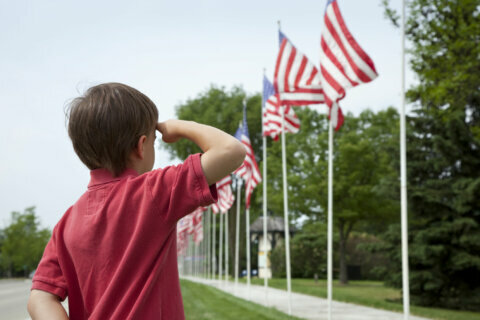