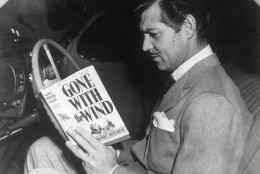 On June 30, 1936, the Civil War novel “Gone with the Wind” by Margaret Mitchell was first published by The Macmillan Co. in New York.

In 1865, eight people, including Mary Surratt and Dr. Samuel Mudd, were convicted by a military commission of conspiring with John Wilkes Booth, the assassin of President Abraham Lincoln. (Four defendants, including Surratt, were executed; Mudd was sentenced to life in prison, but was pardoned by President Andrew Johnson in 1869.)

In 1918, labor activist and socialist Eugene V. Debs was arrested in Cleveland, charged under the Espionage Act of 1917 for a speech he’d made two weeks earlier denouncing U.S. involvement in World War I. (Debs was sentenced to prison and disenfranchised for life.)

In 1934, Adolf Hitler launched his “blood purge” of political and military rivals in Germany in what came to be known as “The Night of the Long Knives.”

In 1953, the first Chevrolet Corvette, with its innovative fiberglass body, was built at a General Motors assembly facility in Flint, Michigan.

In 1963, Pope Paul VI was crowned the 262nd head of the Roman Catholic Church.

In 1966, the National Organization for Women (NOW) was founded in Washington, D.C.

In 1971, the Supreme Court ruled, 6-3, that the government could not prevent The New York Times or The Washington Post from publishing the Pentagon Papers. A Soviet space mission ended in tragedy when three cosmonauts aboard Soyuz 11 were found dead of asphyxiation inside their capsule after it had returned to Earth.

In 1977, President Jimmy Carter announced he had decided against production of the Rockwell B-1 bomber, saying it was too costly. (However, the B-1 was later revived by President Ronald Reagan.)

In 1982, the proposed Equal Rights Amendment to the U.S. Constitution expired, having failed to receive the required number of ratifications for its adoption, despite having its seven-year deadline extended by three years.

In 1985, 39 American hostages from a hijacked TWA jetliner were freed in Beirut after being held 17 days.

In 1997, the Union Jack was lowered for the last time over Government House in Hong Kong as Britain prepared to hand the colony back to China at midnight after ruling it for 156 years.

In 2013, 19 elite firefighters known as members of the Granite Mountain Hotshots were killed battling a wildfire northwest of Phoenix after a change in wind direction pushed the flames back toward their position.

Ten years ago: Democrat Al Franken was declared the winner of Minnesota’s eight-month U.S. Senate vote recount, defeating Republican incumbent Norm Coleman. A Yemeni jet with 153 people on board crashed into the Indian Ocean as it tried to land on the island nation of Comoros; a 12-year-old girl was the sole survivor. American soldier Pfc. Bowe R. Bergdahl went missing from his base in eastern Afghanistan, and was later confirmed to have been captured by insurgents. (Bergdahl was released on May 31, 2014 in exchange for five Taliban detainees.)

One year ago: Hundreds of thousands of people gathered for rallies and marches in hundreds of locations around the country, demanding an end to the separation of immigrant families who cross into the United States.