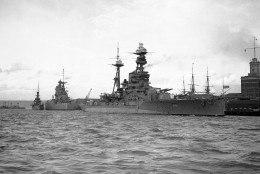 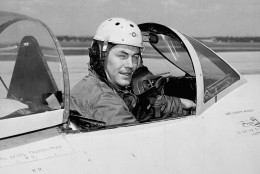 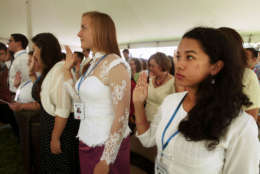 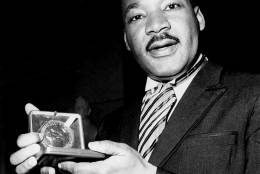 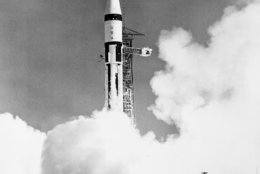 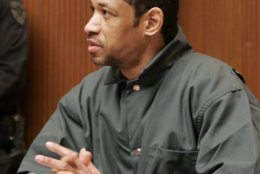 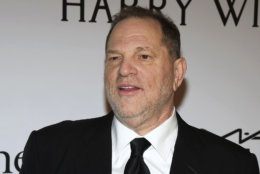 In 1912, Theodore Roosevelt, campaigning for the presidency, was shot in the chest in Milwaukee. Despite the wound, he went ahead with a scheduled speech.

In 1930, Ethel Merman made her Broadway debut in the musical comedy “Girl Crazy” with songs by George and Ira Gershwin.

In 1933, Nazi Germany announced it was withdrawing from the League of Nations.

In 1939, a German U-boat torpedoed and sank the HMS Royal Oak, a British battleship anchored at Scapa Flow in Scotland’s Orkney Islands; 833 of the more than 1,200 men aboard were killed.

In 1960, the idea of a Peace Corps was suggested by Democratic presidential candidate John F. Kennedy to an audience of students at the University of Michigan in Ann Arbor.

In 1968, the first successful live telecast from a manned U.S. spacecraft was transmitted from Apollo 7.

In 1981, the new president of Egypt, Hosni Mubarak (HOHS’-nee moo-BAH’-rahk), was sworn in to succeed the assassinated Anwar Sadat. Mubarak pledged loyalty to Sadat’s policies.

In 1987, a 58-hour drama began in Midland, Texas, as 18-month-old Jessica McClure slid 22 feet down a narrow abandoned well at a private day care center; she was rescued on Oct. 16.

In 2001, as U.S. jets opened a second week of raids in Afghanistan, President George W. Bush sternly rejected a Taliban offer to discuss handing over Osama bin Laden to a third country.

In 2003, John Allen Muhammad pleaded not guilty to murder as the first trial in the deadly Washington-area sniper rampage got under way in Virginia Beach, Va. (Muhammad was later convicted of killing Dean Harold Meyers and executed in 2009.)

In 2017, a truck bombing in Somalia’s capital killed more than 500 people in one of the world’s deadliest attacks in years; officials blamed the attack on the extremist group al-Shabab and said it was meant to target Mogadishu’s international airport, but the bomb detonated in a crowded street after soldiers opened fire. The board of the Academy of Motion Picture Arts and Sciences revoked the membership of movie mogul Harvey Weinstein (WYN’-steen), after published reports about sexual harassment and rape allegations against Weinstein.

Ten years ago: The Unification Church held the largest mass wedding in a decade, with some 40,000 people participating in dozens of cities around the world. NASCAR founder Bill France Sr. headlined the five inductees into the first Hall of Fame class; Richard Petty, Dale Earnhardt, Bill France Jr. and Junior Johnson were the others. Pro wrestler Lou Albano, 76, died in Westchester County, New York.

Five years ago: A second nurse at Texas Health Presbyterian Hospital Dallas came down with Ebola after contracting it from a dying patient. (The nurse, Amber Joy Vinson, was later declared free of the disease.) After a conspicuous public absence of nearly six weeks, North Korean leader Kim Jong Un (gihm jung oon) appeared in images released by state media attending a pair of events, dispelling rumors that he was gravely ill, deposed _ or worse.

One year ago: Saudi Arabia threatened to retaliate for any sanctions imposed on it over the disappearance and suspected murder of journalist Jamal Khashoggi (jah-MAHL’ khahr-SHOHK’-jee); President Donald Trump had told CBS’s “60 Minutes” that the kingdom deserved “severe punishment” if it was responsible. Pope Francis made saints of Pope Paul VI and Salvadoran Archbishop Oscar Romero, praising them as prophets who shunned wealth and looked out for the poor.