When it opened in 1952, the Bay Bridge was the world’s largest continuous over-water steel structure. It is named after former Maryland Governor William Preston Lane, Jr., who was instrumental in obtaining approval for and starting of the bridge’s construction. Exploring the possibility of building a bridge across the bay began with preliminary studies conducted in the 1880s.

In 1927, a group of Baltimore businessmen started to raise funds to build a Bay Bridge and detailed plans were developed. However, the 1929 stock-market crash ended this endeavor. In the early 1930s, several commissions were selected to organize and plan for the bridge. These efforts required federal aid that was not available at the time. In 1938, the Maryland General Assembly submitted a proposal for a bridge and legislation for the construction of the bridge was passed. Movement to start construction was delayed because of the United States involvement in World War II.

Under the direction of Governor Lane, the General Assembly passed legislation to begin bridge construction in 1947. After approximately four decades of planning and organizing, the construction started in January 1949, and the largest public project in the history of the Maryland began. Soon after, underwater work was initiated and the first permanent piles were driven into the Bay’s bottom in March 1950. The bridge was more than one-third complete by the end of the year.

What is now the eastbound span opened to traffic on July 30, 1952. The cost to build the bridge was $45 million. In it’s first year, 1.1 million vehicles drove across the bridge. In 1967, due to increasing traffic volume, the Maryland General Assembly authorized the State Roads Commission to oversee construction of three possible locations for a new crossing. These locations included one north near Baltimore, one in Southern Maryland and one next to the existing bridge from Kent Island to Sandy Point. The option of an additional bridge at Sandy Point was given the highest priority, and construction of the new span began in 1969 and was completed on June 28, 1973. The construction cost was $148 million.

The two spans are 4.33 (westbound) and 4.35 (eastbound) miles long and form the longest fixed-water crossing in Maryland. The eastbound span’s tower is 354 feet tall and the westbound span’s tower is 379 feet tall. Both spans are 186 feet at their highest points, which is high enough to allow ocean-going vessels and ships to pass. The curve near the western side of the bridge was built so that the main spans cross the bay’s shipping channels at 90 degrees, a requirement of the United States Army Corps of Engineers.

In 2017, traffic volume in both directions was 27.2 million vehicles. The bridge’s traffic capacity is 1,500 vehicles per lane, per hour. On an average Friday during the summer, more than 56,000 vehicles cross the eastbound span and more than 36,000 cross the westbound span. 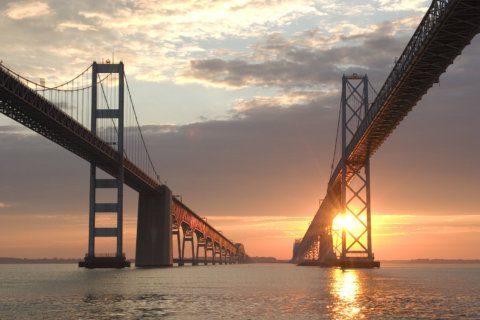 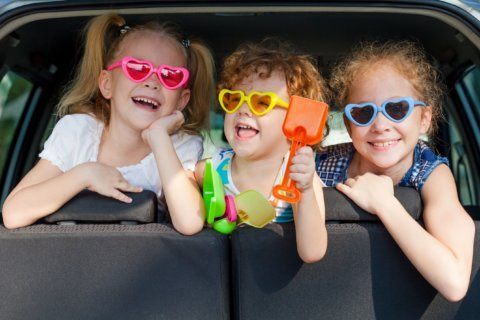 Traveling tips for a safe and happy ride to the beach