A federal judge has refused to throw out a lawsuit's claims that police on Maryland’s Eastern Shore used excessive force on a 19-year-old Black man who died in 2018 during a struggle with officers who handcuffed him and shackled his legs.
Listen now to WTOP News WTOP.com | Alexa | Google Home | WTOP App | 103.5 FM
(1/4) 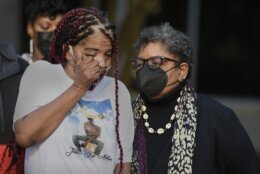 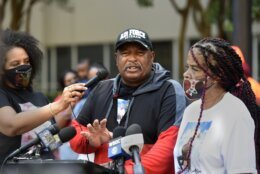 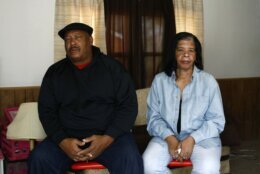 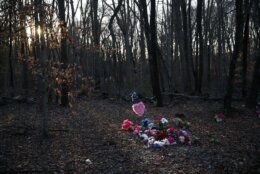 COLLEGE PARK, Md. (AP) — A federal judge has refused to throw out a lawsuit’s claims that police on Maryland’s Eastern Shore used excessive force on a 19-year-old Black man who died in 2018 during a struggle with officers who handcuffed him and shackled his legs.

Relatives of Anton Black sued the officers who chased him and tried to restrain him outside his family’s home in rural Greensboro, Maryland.

In a 27-page ruling Tuesday, U.S. District Judge Catherine Blake said body camera video of the deadly encounter doesn’t conclusively contradict the family’s claims that police used excessive force on Black. The judge concluded that a reasonable jury “could reach more than one conclusion” about whether officers used a reasonable degree of force against Black.

An autopsy report on Black’s death was released in 2019 two days after Maryland Gov. Larry Hogan, a Republican, expressed frustration at the pace of the investigation. The state medical examiner’s autopsy report lists Black’s death as an accident and said Black’s congenital heart condition, mental illness and stress from the struggle likely contributed to his death.

But an expert for the lawsuit’s plaintiffs, a cardiologist at Johns Hopkins University, concluded that asphyxiation was the cause of Black’s death.

Body camera video captured parts of the altercation on Sept. 15, 2018. Police released the video in January 2019 after a county prosecutor announced that he wasn’t asking a grand jury to consider criminal charges in Black’s death.

The video shows Webster confronting Black in response to a 911 call that a man was roughly dragging a child down the road in a headlock. The boy, a friend of Black’s family, told the officer that Black was “schizophrenic” and had been acting strangely.

When Webster ordered Black to place his hands behind his back and told him he was under arrest, Black said, “I love you,” and then turned and jogged in the opposite direction.

After Black jogged back to his family’s home and got into a car, Webster used a baton to smash a car window and then used a stun gun on Black. Later, during a struggle on the porch of his family’s home, Black lost consciousness as Manos, Lannon and Webster tried to restrain him.

Plaintiffs’ experts have said the officers’ decision to apply pressure to Black while he was restrained, face down with his legs in the air, wasn’t reasonable because of the risk of asphyxiation. Blake said Webster acted “objectively reasonably” when he tried to arrest and chased after Black, suspecting he was assaulting the boy.

But the judge concluded there is a “genuine dispute of material fact” whether it was reasonable for Webster to use his baton to break the car window without warning or to use the stun gun on Black. Blake reached the same conclusion about the officers’ attempts to restrain Black on the porch.

“It is impossible to tell how much weight and what body parts, if any, Webster placed on Black throughout the nearly six minutes of footage. Nor can a viewer discern if or for how long Webster placed his knees on Black’s neck, shoulders, or upper torso,” the judge wrote.

During the struggle, Webster told Black’s mother, Jennell Black, that her son had tried to abduct a 12-year-old child and then ran from police. Black’s mother stood nearby, yelling his name and begging for him to respond. Black later was pronounced dead at a hospital.

Black had been diagnosed with a severe form of bipolar disorder. He was hospitalized less than two weeks before his death after his father called police, concerned that his son had been acting strangely at home.

Blake said a person’s mental health must be factored into the use of force by police. The Greensboro Police Department’s handbook suggests that Webster didn’t try de-escalate or avoid overreacting to somebody in the grips of a mental health crisis when he smashed the car window and used the stun gun on Black, the judge concluded.

“As with the baton and taser, the factual dispute as to whether Black was secured and did not pose a threat to the officers throughout the time they were subduing him on the porch must be viewed in the light most favorable to the plaintiffs at this stage in litigation,” she wrote.

Blake said the officers can renew their requests for her to dismiss the lawsuit’s excessive force claims after they finish sharing evidence with plaintiffs.

Lawyers from the American Civil Liberties Union of Maryland are among the attorneys representing Black’s family.

LaToya Holley, one of Black’s sisters, said the family and their supporters have “fought for justice for Anton from day one.”

“This court decision brings us a step closer to accountability for the police murder of Anton and those who covered it up, and for all the families still mourning loved ones who have been killed by police,” Holley said in a statement released by the ACLU chapter.