A deer that had gotten its head stuck in a snack container for over a week around Bel Air, Maryland, has finally been freed Sunday night by members of the Maryland Department of Natural Resources.
Listen now to WTOP News WTOP.com | Alexa | Google Home | WTOP App | 103.5 FM
(1/9) 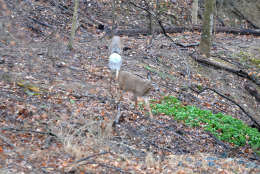 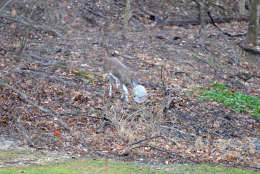 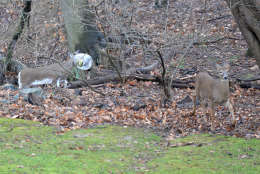 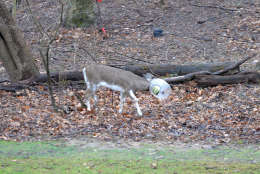 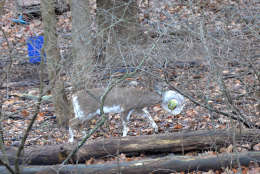 WASHINGTON — A deer that had gotten its head stuck in a snack container for over a week around Bel Air, Maryland, has finally been freed Sunday night by members of the Maryland Department of Natural Resources.

Paul Peditto, the director of the DNR Wildlife and Heritage Service, tweeted photos and video of the rescue mission, showing the deer as it was tranquilized during the plastic jug removal process.

After residents spotted the deer over a week ago with the oversized, clear plastic snack container on its head, they took to social media to garner attention for the trapped animal.

It was upsetting to see the deer unable to free itself of the container, said Chris Beauchamp, a resident of the Glenwood Country Club Park neighborhood.

“It can’t eat, it can’t drink, and now going over a week since he was first spotted — and who knows how long before that — he’s been without food and water,” Beauchamp told WTOP.

Beauchamp wasn’t alone in his concern: The local community started a Facebook page to try to track down the endangered deer. Beauchamp, a runner and cyclist, had been keeping watch and took photos to post to the Facebook page.

“The whole community has kind of chipped in to kind of watch out for this guy and try to get it some help,” Beauchamp said.

Beauchamp also said the neighborhood alerted DNR to the presence of the deer that some have christened “Jughead.” He added that he was encouraged by the apparent health of the deer: “He’s still moving around pretty actively. He has a morning spot where he seems to show up.”

Employees of the DNR were tracking the deer. Peditto said staffers have to get close enough to the buck to get an accurate shot from a tranquilizer gun — and weather plays a role.

“Dart guns are highly subject to the wind,” Peditto said. “Essentially, the dart would get blown around in the kind of wind we’re experiencing. And the outcome of having a poorly placed dart is actually worse than having a deer with a bucket on its head. If you put a dart in the chest cavity of a deer, you’re going to kill it.”

Peditto said it’s not unusual for deer to get their heads stuck in containers; he recalled a case in Montgomery County where a deer got a bucket stuck on its head.

Deer are often drawn to discarded snack containers, looking for the salt inside. You can help prevent it from happening, Peditto said. When discarding plastic containers, “Seal it before you chuck it: Put the lid back on and this problem won’t happen,” he added.

And once deer are tranquilized, they don’t just drop over when they’re hit with a dart — it will take some tracking, and the ability to reach the animal before it comes to.

“We’ve got to get a little bit lucky — but you know, this is what we do for a living,” Peditto said. “I’m confident we can make it happen.”