A former Virginia police officer who pleaded guilty to storming the U.S. Capitol with another off-duty officer deserves to avoid a prison sentence for his cooperation and trial testimony against the other officer, federal prosecutors argued in a court filing Tuesday.
Listen now to WTOP News WTOP.com | Alexa | Google Home | WTOP App | 103.5 FM

A former Virginia police officer who pleaded guilty to storming the U.S. Capitol with another off-duty officer deserves to avoid a prison sentence for his cooperation and trial testimony against the other officer, federal prosecutors argued in a court filing Tuesday.

Justice Department prosecutors recommended six months of probation along with a period of home detention or “community confinement” for former Rocky Mount police officer Jacob Fracker. He pleaded guilty to a felony charge that he conspired with a former colleague, Thomas Robertson, to obstruct Congress from certifying President Joe Biden’s 2020 electoral victory.

Prosecutors have recommended an eight-year prison sentence for Robertson, who was convicted by a jury of attacking the Capitol to obstruct Congress from certifying the Electoral College vote on Jan. 6, 2021.

Robertson is scheduled to be sentenced on Thursday and Fracker, next Tuesday.

Sentencing guidelines calculated by the court’s probation department recommend Fracker receive a term of imprisonment ranging from 15 to 21 months. His lawyer requested a sentence of house arrest, probation and community service.

U.S. District Judge Christopher Cooper isn’t bound by any of the recommendations when he sentences Robertson and Fracker.

Fracker was scheduled to be tried alongside Robertson before he pleaded guilty in March. He described Robertson as his mentor and a father figure.

“In addition, Fracker’s testimony substantially helped establish Robertson’s corrupt intent to obstruct the proceeding,” prosecutors wrote. “Prior to Fracker’s cooperation, the evidence of Robertson’s intent relied on his social media postings, which Robertson sought to discount as online bragging.”

Fracker testified at Robertson’s trial that he initially believed that he was merely trespassing when he entered the Capitol building. But he ultimately pleaded guilty to conspiring with Robertson to obstruct Congress.

Under cross-examination by one of Robertson’s lawyers, Fracker said he didn’t have a “verbal agreement” with anybody to obstruct the joint session of Congress. Fracker said he believed everybody in the mob “pretty much had the same goal” and didn’t need for it to be “said out loud.”

Robertson didn’t testify at his trial before a jury convicted him in April of all six counts in his indictment, including charges that he interfered with police officers at the Capitol and that he entered a restricted area with a dangerous weapon, a large wooden stick.

If an eight-year prison sentence were to be handed Robertson, it would be the longest among hundreds of Capitol riot cases. The lengthiest so far is seven years and three months for Guy Reffitt, a Texas man who attacked the Capitol while armed with a holstered handgun.

Robertson traveled to Washington, D.C., on the morning of Jan. 6 with Fracker and a third man, a neighbor. They donned gas masks as they approached the Capitol and joined the mob of rioters.

Fracker said he and Robertson both believed the 2020 presidential election had been stolen from former President Donald Trump.

The town fired Robertson and Fracker after the riot. Rocky Mount is about 25 miles (40 kilometers) south of Roanoke and has roughly 5,000 residents. 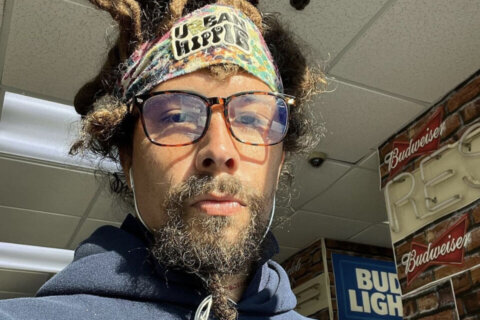 Where’s the beach? Ian washed away lots of Mid-Atlantic sand