So far, 250 people seen on video assaulting police at the Capitol still haven’t been fully identified and apprehended by the FBI, and another 100 are being sought for other crimes tied to the riot.
Listen now to WTOP News WTOP.com | Alexa | Google Home | WTOP App | 103.5 FM
(1/4) 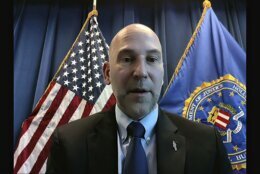 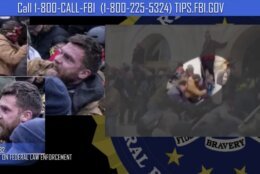 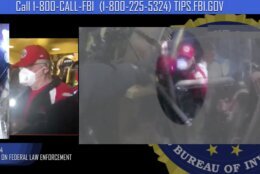 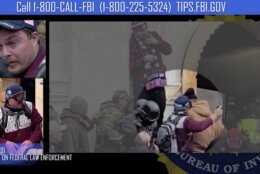 WASHINGTON (AP) — The suspect was covered from head to toe, skulking through the dark streets of the nation’s capital before methodically placing two explosives outside the offices of the Republican and Democratic national committees.

Only 17 hours later — and just before the U.S. Capitol was stormed by a sea of pro-Trump rioters — were the pipe bombs discovered. It quickly became one of the highest-priority investigations for the FBI and the Justice Department.

But the trail grew cold almost immediately. A year later, federal investigators are no closer to learning the person’s identity. And a key question remains: Was there a connection between the pipe bombs and the riot at the Capitol?

The suspect is among hundreds of people still being sought by the FBI following last January’s deadly insurrection. So far, 250 people seen on video assaulting police at the Capitol still haven’t been fully identified and apprehended by the FBI, and another 100 are being sought for other crimes tied to the riot.

The investigation has been a massive undertaking for federal law enforcement officials. More than 700 people have been charged with federal crimes stemming from the Jan. 6 attack, and arrests are still being made regularly.

But for the FBI agents working on the cases, the job is far from over. Agents and investigative analysts have been poring over thousands of hours of surveillance video, going second by second in each video to try to capture clear images of people who attacked officers inside the Capitol.

“This investigation takes time because it is a lot of lot of work, a lot of painstaking work that they look at the video kind of frame by frame,” said Steven D’Antuono, the assistant director in charge of the FBI’s field office in Washington.

In one case, police body camera footage captures a man using a cane with electric prods on the end jabbing at officers and shocking them as they fight to hold back the riotous crowd trying to break through a barricaded line of officers at one of the doors of the Capitol. The crackling sound of the electricity can be heard as he prods his cane into one of the officers. The man, known only as “AFO114” — using shorthand for “assaulting a federal officer” — is still being sought.

In another video, a man is seen repeatedly bashing a police officer over the head with a 6-foot (1.8-meter) metal pole as he tries to push his way into the Capitol. And a third shows a man spraying some kind of chemical from a can into the faces of other officers.

In the search for the person who left the pipe bombs at the RNC and DNC offices, investigators have interviewed more than 900 people, collected 39,000 video files and examined more than 400 leads. They have dived into the components of the explosives and have been working to try to discern anything they can about the suspect, from analyzing the person’s gait to trying to collect information about purchases of the distinctive Nike sneakers the person wore.

But they are still no closer to finding the suspect’s identity and are hoping renewed attention on the video of the person may spark a tip to crack the case.

The explosive devices were placed outside the two buildings between 7:30 p.m. and 8:30 p.m. on Jan. 5, 2021, but weren’t located by law enforcement until the next day. U.S. Capitol Police and agents from the FBI and the Bureau of Alcohol, Tobacco, Firearms and Explosives were called to the Republican National Committee’s office around 12:45 p.m. on Jan. 6. About 30 minutes later, as the agents and bomb technicians were still investigating at the RNC, another call came in for a similar explosive device found at the Democratic National Committee headquarters nearby. The bombs were rendered safe, and no one was hurt.

Video released by the FBI shows a person in a gray hooded sweatshirt, a face mask and gloves appearing to place one of the explosives under a bench outside the DNC and separately shows the person walking in an alley near the RNC before the bomb was placed there. The person wore black and light gray Nike Air Max Speed Turf sneakers with a yellow logo.

“We’ve used and continue to use every investigative tool that we lawfully have to find this individual,” D’Antuono said. But, a year later, investigators still don’t know whether the suspect is a man or a woman. The person carried the bombs — made of threaded galvanized pipes, kitchen timers and homemade black powder — in a backpack.

“We’re still nose to the grindstone here and trying to find this individual, trying to bring the person to justice,” D’Antuono said. “But there is hopefully maybe somebody still out there that knows the person or sees the video again.”

It is unclear whether the bombs were related to planning for the insurrection or whether they were unrelated to the deadly riot. Both buildings are within a few blocks of the Capitol.

And the fact the suspect was covered from head to toe has made identifying the person extremely difficult for the FBI.

“In normal times, like if this wasn’t COVID,” D’Antuono said, “a person walking down the street in D.C. covered from head to toe with a mask on, glasses and gloves would have been a red flag.”