The storming of the U.S. Capitol is a jarring but natural product of years of violence and hateful rhetoric stoked by disinformation and conspiracy theories, experts on far-right extremism said as they pored over images of Wednesday's riot.
Listen now to WTOP News WTOP.com | Alexa | Google Home | WTOP App | 103.5 FM

COLLEGE PARK, Md. (AP) — The storming of the U.S. Capitol is a jarring but natural product of years of violence and hateful rhetoric stoked by disinformation and conspiracy theories, experts on far-right extremism said as they pored over images of Wednesday’s riot.

Members of far-right groups, including the violent Proud Boys, joined the crowds that formed in Washington to cheer on President Donald Trump as he urged them to protest Congress’ counting of Electoral College votes confirming President-elect Joe Biden’s win. Then they headed to the Capitol. Members of smaller white supremacist and neo-Nazi groups also were spotted in the crowds. Police were photographed stopping a man identified as a leading promoter of the QAnon conspiracy theory from storming the Senate floor.

Online forums popular with Trump supporters lit up with gleeful posts about the chaotic scenes broadcast from the Capitol. Thousands of messages on Parler, a right-wing alternative to Twitter, included the hashtag #civilwar or other variations of the term.

“If you’re surprised, you haven’t been paying attention,” said Integrity First for America executive director Amy Spitalnick. “We should all be horrified by this, but nobody should be surprised that this is happening.”

Spitalnick’s civil rights group is backing a federal lawsuit filed by victims of the violence that erupted at the August 2017 white nationalist “Unite the Right” rally in Charlottesville, Virginia, that left a counterprotester dead. One of the far-right fringe figures who had been listed as a speaker at the Charlottesville rally was livestreaming video of the Capitol melee on Wednesday.

Tim “Baked Alaska” Gionet posted video that showed Trump supporters in “Make America Great Again” and “God Bless Trump” hats milling around and taking selfies with officers who calmly asked them to leave the premises. The Trump supporters talked among themselves, laughed, and told the officers and each other: “This is only the beginning.”

The crowd of Trump supporters at the Capitol also included adherents of the “Groyper Army,” a loose network of white supremacists that includes “America First” podcaster Nick Fuentes.

Jonathan Greenblatt, CEO of the Anti-Defamation League, said the mob’s actions were “clearly consistent” with the conspiratorial rhetoric of QAnon, the baseless belief that Trump has been secretly fighting deep state enemies and a cabal of Satan-worshipping cannibals operating a child sex trafficking ring.

“QAnon has been calling on this kind of madness for years,” Greenblatt said.

Representatives of Facebook and Twitter said Wednesday that they were working to remove threats and calls for violence from the social media platforms.

But across both platforms, Trump supporters used the hashtag #StormTheCapitol to document the chaos with photos or video and praise the mob.

More than 1 million mentions of “civil war” and “storm the capitol” had appeared in Twitter posts by Wednesday night, according to an analysis by media intelligence firm Zignal Labs.

Oren Segal, vice president of the ADL’s Center on Extremism, said he spotted members of other white supremacist and neo-Nazi groups — the New Jersey European Heritage Association and Nationalist Social Club — among the pro-Trump crowds in Washington on Tuesday and Wednesday. The storming of the Capitol is the “logical conclusion to extremism and hate going unchecked” during Trump’s presidency, Segal said.

“We had conspiracy theories animating people to action on the ground. We had the mainstream and the extreme narratives meld,” Segal said.

Proud Boys leader Henry “Enrique” Tarrio was arrested this week and ordered to stay out of Washington after he was accused of vandalizing a Black Lives Matter banner at a historic Black church last month. During a debate with Biden, Trump refused to criticize the Proud Boys, instead saying the group should “stand back and stand by.”

“This is a dark day for democracy,” Greenblatt said. “I never would have imagined in my lifetime that we would be witnessing armed protesters storming the halls of Congress.” 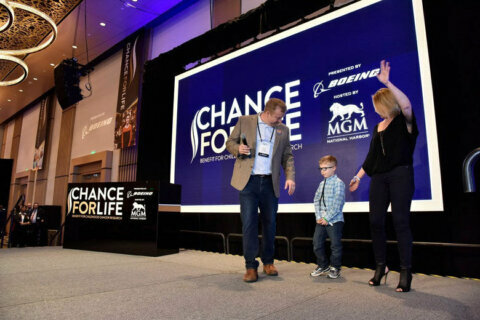