ALEXANDRIA, Va. (AP) — A civil suit filed by the family of a northern Virginia man who was fatally shot by two U.S. Park Police officers during a stop-and-go chase three years ago has been put on hold, despite the family’s objections to the delay.

Bijan Ghaisar, 25, of McLean, died after the November 2017 chase on the George Washington Memorial Parkway outside the nation’s capital. Ghaisar was unarmed, but the officers have said they feared for their life because they believed Ghaisar was driving at them after they approached his vehicle with guns drawn.

U.S. District Judge Claude Hilton on Friday ordered a delay in the trial, which had been scheduled to begin next month. He said a stay is appropriate now that the two officers, Alejandro Amaya and Lucas Vinyard, have been charged criminally with involuntary manslaughter in state court.

Hilton said the delay may provide a window to obtain testimony from the officers, who have been unwilling to testify or give depositions in the civil trial while the criminal case hangs over them.

Lawyers for the Ghaisar family argued unsuccessfully that the family’s pursuit of justice will now be delayed for years longer than it already has.

“His family has waited three years to get some semblance of justice in this case,” said Tom Connolly, one of the family’s lawyers.

Connolly argued that delaying the civil trial to get testimony from the officers is an exercise in futility because they will never testify in the civil case.

Resolving the criminal case, he said, could take years. Fairfax County Commonwealth’s Attorney Steve Descano announced criminal charges against the officers earlier this month, but a battle is expected over whether the case belongs in state or federal court.

If the criminal case is removed to federal court, prosecutors have already said they do not plan to file criminal charges. But Connolly said Friday that the Justice Department could revisit that decision at any time, particularly if the election brings a change in administration. As a result, he said, the officers will never be willing to testify in a civil trial.

After the hearing, Ghaisar’s mother, Kelly Ghaisar, said the ruling was a disappointment.

“Those officers have had three years to testify,” she said. “They have nothing to testify about.”

Most of what is known about the case comes from a four-minute dashcam video of the chase and shooting released by Fairfax County Police, who played a supporting role in the chase. The video shows three separate instances in which Ghaisar stopped his Jeep, and officers approached with guns drawn. Each time, Ghaisar drives off.

During the third stop, on a residential side street, officers open fire as Ghaisar begins to drive away. In court papers, the officers indicate they thought Ghaisar was a threat to them and others, and that the vehicle was aimed at one of the officers.

Ghaisar’s family said the video speaks for itself and shows no such threat.

Hilton scheduled a status hearing in March to reassess when the civil trial can be held. 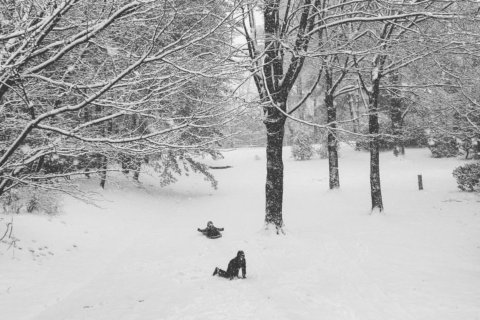