A judge threw out criminal charges against an ex-Roman Catholic schools administrator accused of embezzling nearly $45,000 from the Archdiocese of Washington.

COLLEGE PARK, Md. (AP) — A federal judge threw out criminal charges against a former Roman Catholic schools administrator accused of embezzling nearly $45,000 from the Archdiocese of Washington, ruling that prosecutors improperly charged him in Maryland.

No reasonable juror could conclude “by a preponderance of the evidence” that Maryland was the proper venue for Kenneth Gaughan to be charged and tried, U.S. District Judge Paula Xinis wrote in an opinion issued Thursday. Xinis had agreed during a Dec. 16 hearing to acquit Gaughan of mail fraud charges after a five-day trial, but before a jury rendered a verdict, court records show.

Gaughan, a Washington, D.C., resident, was an assistant superintendent for schools within the archdiocese and worked at an office in Hyattsville, Maryland. A federal grand jury in Greenbelt, Maryland, indicted him in September 2018 on three counts of mail fraud, each of which carried a maximum sentence of 20 years in prison.

The indictment accused Gaughan of transmitting fraudulent invoices and persuading the archdiocese to issue checks for services that Gaughan knew never would be provided.

But the trial evidence showed that three checks that were the subject of Gaughan’s indictment were not mailed from or delivered in Maryland, the judge said. They eventually were delivered in Nebraska, Oregon and Washington, D.C.

Therefore, the judge agreed with Gaughan’s defense attorneys that the District of Maryland wasn’t the proper venue for his case to be brought and tried.

“Gaughan’s crime, ‘causing to be delivered’ three checks, would render prosecution proper in the districts into where those checks were delivered,” she wrote.

Prosecutors argued Maryland was the proper venue for the case because Gaughan, while working in Hyattsville, submitted invoices that eventually caused the three checks to be mailed. Prosecutors also noted that the U.S. Postal Service processed the checks in Gaithersburg, Maryland, before sending them to their final destinations. However, the judge said “the act of delivering the mail remains this Court’s focus.”

Gaughan’s attorneys, federal public defenders Douglas Miller and Meghan Michael, said in a statement Thursday that they are pleased the judge “undertook this careful analysis and upheld Mr. Gaughan’s important Constitutional rights regarding the location in which a criminal prosecution can and cannot be brought.”

The judge said prosecutors and defense attorneys don’t agree whether the double jeopardy clause of the U.S. Constitution bars Gaughan from being charged and retried in another district. Xinis said that’s a question best answered by the court in the district where another indictment is sought, or possibly the 4th U.S. Circuit Court of Appeals.

Gaughan was responsible for recruiting and acting as the point of contact for archdiocese contractors that could help implement anti-bullying, crisis intervention and professional development programs at dozens of Catholic schools in Maryland and Washington, prosecutors said.

From June 2010 through April 2018, Gaughan caused the archdiocese to pay invoices to companies that he incorporated under names nearly identical to real companies, the indictment said. Gaughan also was accused of opening bank accounts and mailboxes to receive the checks that the archdiocese paid for fraudulent invoices.

Official for Archdiocese of Washington accused of embezzling almost $45K 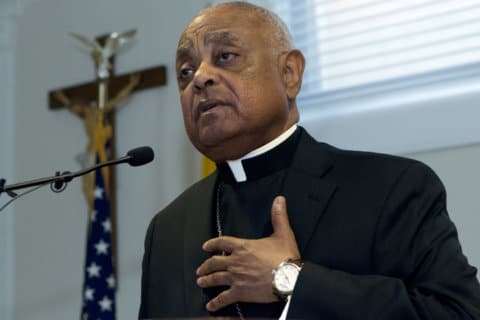 ‘I want to offer you hope’: New DC archbishop aims to rebuild trust