From music therapy to heavy metal: A boy’s drumming journey

Cade Suddith, who was diagnosed with autism shortly after turning 1, has found drumming and music in general have always seemed to keep him focused in a world constantly pulling at his attention.
Listen now to WTOP News WTOP.com | Alexa | Google Home | WTOP App | 103.5 FM
(1/2) 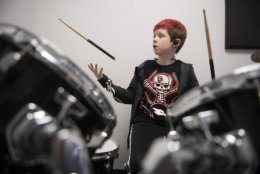 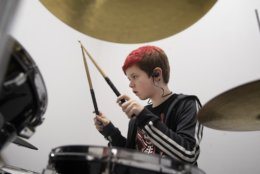 Cade, 10, and his band, Electric Rainbow, were the first group scheduled to perform at the festival that morning. Over a half-hour period, the band played songs by bands as varied as Kiss and Paramore. Cade maintained his focus throughout, drumming so fast his sticks could snap, and occasionally flipping them in the air to impress the audience.

After their set, Cade raced down to his mother, Cat Maselka, who was standing in the audience.

“Mom, can we do the rock climbing?” he asked, pointing to a makeshift rock wall set up a few yards behind them, his attention completely turned from drumming to the next thing.

This is typical of Cade, who was diagnosed with autism shortly after turning 1, Maselka said. Like many kids with autism, his attention frequently bobs from one thing to another. But all of that changes when he sits down to drum.

“Over the last three years, it’s really just become his thing. It’s what he does. (For) some kids it’s soccer, some kids it’s painting and for Cade, it’s playing the drums,” said Jim Learer, owner of Jim’s House of Music in New Market, where Cade takes drum lessons.

In a world constantly pulling at his attention, drumming and music in general have always seemed to keep him focused.

Dealing with the diagnosis

After Cade was diagnosed, Maselka started making phone calls and doing research on how to get her son the resources he needed to succeed.

Autism is a developmental disorder that is often characterized by challenges with social skills, repetitive behavior, speech and nonverbal communication.

“As a parent, you want the best for your kid whether they’re neurotypical or on the spectrum,” Maselka said. “(And) whether he was neurotypical or not, I would still be pushing for the same things.”

That meant making sure Cade went to various therapies to help him with his speech and his motor skills.

One day, while researching grants to help with funding these various therapies, Maselka stumbled upon the Monocacy Foundation, which was offering a grant for music therapy sessions at Noteable Progressions in Spring Ridge.

Maselka, who didn’t know much about music therapy, decided to give it a try. After the first sessions, she said she knew it was the perfect fit for Cade.

“Whatever he already had, (music therapy) just opened him up,” Maselka said. “The first day they took us back, and the woman started playing the guitar. … I saw his entire posturing change.”

According to Darcy O’Daniel, executive and clinical director of Noteable Progressions, music therapy has been an established profession since the 1950s, when it was used to help veterans returning from WWII who suffered from post-traumatic stress disorder.

O’Daniel said music therapy is not prescriptive, but adaptable depending on the needs of the client. Music is used as a tool to help clients work on a functional goal or skill, and a session can incorporate singing songs or using an instrument to create melodies.

With Cade, music was used to help him work on creative thinking, executive functioning and appropriate turn-taking.

“We worked on self-expression through making music … so planning out how to make a song and then continuing to keep working on that song over multiple sessions,” said Joe Jones, who has served as Cade’s therapist for his last six months at Noteable Progressions.

Creating music in these sessions not only helped Cade with basic skills such as communication but also with functioning outside the therapy room in other situations, such as his drum lessons, which he began soon after starting music therapy.

Maselka said music therapy was the door to everything for Cade, and she can’t imagine how it could have turned out any other way.

“Not only has it helped him find something that he loves, but it’s also helped him on so many levels. Socially, emotionally, with his sensory stuff, just being able to communicate with people, giving him confidence,” Maselka said. “We just feel lucky we ran into this.”

Cade, though, is nonchalant about his time in music therapy.

“It was a really fun place, but I graduated from that and I won’t be doing that anymore. Too bad … there are other things, got to move on,” he said with a shrug.

Now it’s all about which song can he learn next.

Today, about a year-and-a-half out of music therapy, Cade is an in-demand young musician. With multiple lessons a week at both Jim’s House of Music and the Frederick Let There Be Rock School, plus gigs on the weekends, the boy with the red hair is known around the music community.

“(People will) say that boy with the red mohawk, he’s really something else, and I’ll tell them, ‘you know, I feel like Cade is like the main student who can do something with this.’ … He just has the drive and ability,” Joni Mason said.

Cade’s specialty in music is not uncommon. People with autism are often associated with having savant-like special skills, and evidence bears that out.

But studies also show that music and music therapies can help children with autism developmentally.

Mason, who has taught Cade for three years, and Learer both say drumming has helped Cade improve in all areas of life.

“His personality has really had a chance to come out,” Learer said. “Instead of me having to communicate with numbers to him, we have full conversations (now). It’s really an impressive thing to see the progress in that regard that he’s made aside from music.”

Still, there are some less-than-spectacular days for the fifth-grader who was nonverbal until age 4.

“He still has days where it’s something he’s done a thousand times and it’s a problem that day,” Maselka said.

Cade has proved, however, that despite the challenges he faces, he is more dedicated than many other kids his age.

“Most kids will practice probably two, three times a week. … I know Cade is in there every day practicing not because he feels like he has to but absolutely because he wants to,” Mason said, who added that Cade just seems to have a natural talent.

“The best thing I feel he can do is he can listen to a song maybe once or twice … and he can pick it up like that,” Mason said.

She thinks he could play professionally.

“To have that fundamental base at 10 years old — I can’t imagine where he’ll be at 15 and 20,” Mason said. “I just don’t see how it wouldn’t work out because he’s just so good, and he’s only going to get better.”

And Cade is all for it. His goal is to play at Wembley Stadium in London one day, joining the ranks of other famous acts including Queen, Michael Jackson and U2.

“It’s the biggest stadium I’ve ever seen. I love it,” Cade said. “Too bad it’s all the way in London, but I can fly there and then tour all around Europe and then finally land in Wembley.”

Maselka is also on board.

“I always tell people … as long as he wants to do it, we’re here,” she said. “You want your kids to do what they love, and he breathes this.”

She said as long as Cade’s passion is there, she will continue to drive him to lessons and gigs, listen to heavy metal in the car, and allow him to explore his musical ingenuity — up to a point.

For the boy who’s always looking to move on to the next thing, drumming may be one of the few things he has no interest in moving on from.