“ICE is an insatiable monster that has now been completely unleashed to intimidate and raid our communities,” said Isaias Guerrero of Sanctuary DMV, a group that, according to its website, is “dedicated to protecting immigrants and targeted communities.”

Holding butterfly signs — which they said symbolizes the freedom to migrate — the crowd chanted in Spanish “Here we are, and we are not leaving,” and “not one more deportation.” 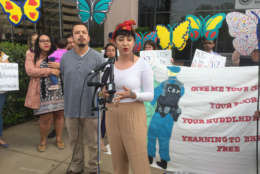 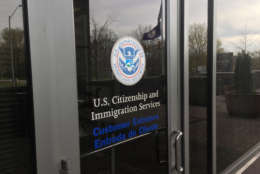 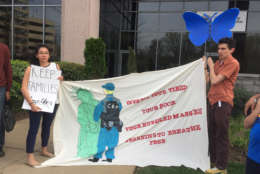 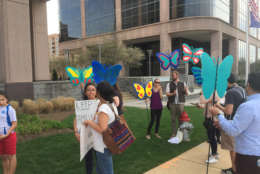 According to ICE, 68 of the 82 people arrested had previous criminal convictions, and two had ties to the MS-13 gang, according to ICE.

“This week’s operation successfully removed immigration violators with a variety of criminal convictions ranging from driving under the influence to grand larceny from our communities.”

“What we’re seeing is actually a lot of the same, not any less, and not any worse, just more boldly, and more publicly, and more unapologetically,” Acuña said.

People suspected of being in this country illegally should be entitled to due process, said Acuña, who condemned ICE program 287(g), under which police officers can receive training similar to that of immigration officers.

There are many myths about crime and undocumented immigrants, Acuña said, and he and others are working to dispel those myths.

The recent news of a rape at a Rockville High School — in which two students in the U.S. illegally have been accused — has made dispelling such myths challenging, he said.

“It’s an excuse to punish and criminalize groups of people that are so far away from what happened in Rockville,” Acuña said.