Washington’s fresh start as Commanders complicated by past

When Washington takes the field Sunday against Jacksonville, the NFL franchise will play a game that counts as the Commanders for the first time. It’s the culmination of a rebranding process that has lasted more than two years.
Listen now to WTOP News WTOP.com | Alexa | Google Home | WTOP App | 103.5 FM

ASHBURN, Va. (AP) — When Washington takes the field Sunday against Jacksonville, the NFL franchise will play a game that counts as the Commanders for the first time.

It’s the culmination of a rebranding process that has lasted more than two years and will coincide with pomp, circumstance and a redone fight song for a team looking to move beyond its past. Though as the organization tries to revive its reputation, and coach Ron Rivera attempts to build a winning culture, scandals from the past continue to get in the way and hinder that process.

Most notable is an ongoing congressional investigation into workplace culture, including the impending release of information from owner Dan Snyder’s nearly 11 hours of testimony that would immediately overshadow anything and everything on the football and business sides. Team president Jason Wright referred to it as “ghosts of Christmas past” and expects to see progress after several months without one of them popping up.

With that appearing to be wishful thinking for now, the Commanders forge ahead knowing it’s an uphill battle to get fans back in the stands and earn respect around the league.

“It goes in cycles,” Rivera said. “Does it make what I do harder? Yeah, it really does because all that stuff that’s happened, that’s important. It is. But to me, as a football coach, what I have to do is I’ve got to make this team presentable as a football team on the football field and in the community.”

The pandemic certainly clouded that effort, with the name change from Redskins to Washington Football Team in the summer of 2020 coming out of a national reckoning on racism and sponsors pressuring to drop the old moniker after decades of criticism from Native American advocacy groups. Rivera, known for his community involvement in his previous stop with Carolina, lamented not being able to get out into the Washington area with players to engage with fans and cited that as “the next big thing” that might help.

It won’t hurt, and there already seems to be movement recapturing the fanbase. Wright said the team has already sold more tickets for this season than all of 2021 combined.

After missing the playoffs 17 of the past 22 years, winning is the easy answer for helping the Commanders brand in the football department.

Off the field, it’s muddled by investigations into sexual harassment and other workplace misconduct by the U.S. House Committee on Oversight and Reform and another looking into financial dealings commissioned by the NFL and run by former Securities and Exchange Commission chair Mary Jo White. They follow the league’s independent investigation by attorney Beth Wilkinson that yielded a $10 million fine for the team’s toxic workplace culture.

No written report of those findings has been released, which prompted Congress to launch its own review last fall. Since then, Washington also had experienced safety Deshazor Everett killing his passenger in a December crash and being charged with felony involuntary manslaughter before pleading guilty to misdemeanor reckless driving, defensive coordinator Jack Del Rio calling the Jan. 6 insurrection a “dust-up at the Capitol” and getting fined $100,000 by the team, a potential stadium deal with Virginia falling apart in the aftermath of that comment and, most recently, rookie running back Brian Robinson Jr getting shot twice in the right leg in an attempted robbery.

Those off-field developments affect players to varying degrees. But Rivera has also shielded them of much of what defensive captain Jonathan Allen called the outside noise.

Rivera, who likes to differentiate between what he considers important for his team compared to what’s interesting, said he doesn’t want to brush aside some of what has transpired in the organization in previous years. His biggest challenge is balancing acknowledging those things and moving past them with the Commanders opening a new chapter in franchise history.

“I don’t want people mixing up what happened back then with what we’re trying to do as a football team,” Rivera said. “Appreciate us for being the football team, and the other stuff is over there. That’s what I’m hoping.” 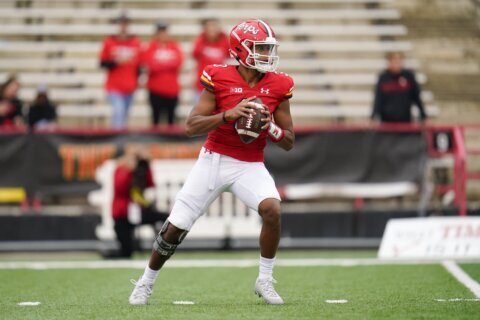