Attendance at NASCAR races in Dover, Delaware, rebounded following two years of pandemic restrictions, and it may be the boost the track needed in its first race under new management.
Listen now to WTOP News WTOP.com | Alexa | Google Home | WTOP App | 103.5 FM
(1/5) 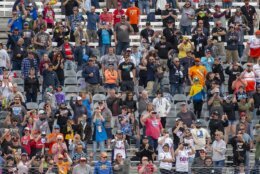 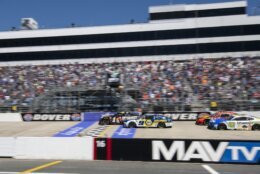 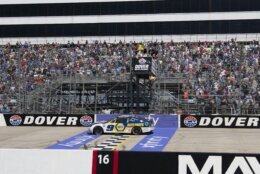 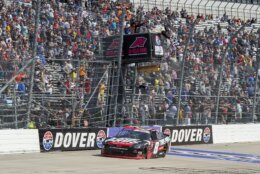 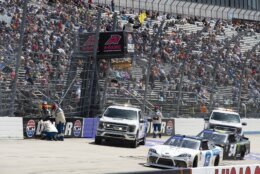 DOVER, Del. (AP) — Chase Elliott took note that Dover’s grandstands passed the eye test and looked fuller on Sunday before rain washed out the conclusion of the race.

A track that scaled down in size — and races — in recent years had full sections, hundreds of fans crowded the entertainment events chasing driver autographs, and the turnout for a country music concert seemed fitting for a popular act on the property’s yearly music festival.

At least one Delaware native loved the scene.

“This is like a festival atmosphere,” actor and pace car driver Ryan Phillippe said. “What’s going on outside with the concerts, and inside, it feels like way more than just a race for me.”

The advertising tarps that once covered empty sections at Dover Motor Speedway went the way of the rain on Monday: Totally gone.

“That was a great crowd we had yesterday,” Elliott said after he won the race on Monday. “Biggest crowd I have seen here personally since I’ve been racing, which I thought was really cool. Proud to see that.”

Dover’s attendance rebound following two years of pandemic restrictions — and shrinking turnout for more than a decade even before 2020 — was the boost the track needed in its first race under new management.

Long independently owned, Speedway Motorsports bought Dover Motorsports late last year and added the Monster Mile to its growing collection of tracks. And who doesn’t want to impress the new boss, especially when the boss — in this case, Speedway Motorsports President Marcus Smith — worked the Dover gates and greeted fans Monday with the track short-staffed.

Dover had already moved its fall race to a new location. Perhaps a poor showing this weekend would have made Speedway Motorsports strongly consider bumping Dover off the slate completely to a sexier new site. The old mile concrete track still has legs: Speedway Motorsports COO Mike Burch said the plan was to keep Dover on the NASCAR schedule just as its been since 1969.

“Nobody has ever looked at making changes to thriving events,” Burch said. “If the fans want us to continue to have races here, the racing is good, the support is here, yes, absolutely.”

Dover’s second race was transferred last season to Nashville Superspeedway. Speedway Motorsports property New Hampshire Motor Speedway, a track with anemic attendance, kept its summer date but had its September race weekend moved to Las Vegas in 2018. Pocono, which ran doubleheader weekends each of the last two years, lost a race this season to the Raceway at Gateway in the St. Louis region.

For those keeping score, that’s three lost dates in the Northeast corridor in a span of just four years. But the bleeding may stop.

“Given where we are, there just has never been any kind of discussion about us losing a race,” Dover President Mike Tatoian said. “I have no reason to believe we will not be racing here for a long period of time.”

Burch said NASCAR’s footprint in the region may have changed, but the series isn’t intent on deserting the area. The road course at Watkins Glen in New York races in August. NASCAR dumped tracks in the Chicago area and Kentucky over the last few years in favor of reinvigorated markets like Nashville, or tried bold ideas in new ones like racing on an asphalt track inside Memorial Coliseum.

The industry has remained bullish on reimagining its schedule, leaving no guarantee the same old tracks your grandparents visited will be around for you to take your grandkids.

“I don’t think there’s any desire to leave a market,” Burch said. “But if you want to open up new markets, unfortunately, in order to go to different markets, you have to look at losing a race. But you really have to think long and hard before you abandon a market altogether.”

The reality is, no developer is building tracks, meaning any potential new dates would have to be held in man-made entertainment sites (like in Los Angeles), city street races, or millions would have to be invested in rehabbing old tracks such as the Nashville Fairgrounds.

“Can you support it long-term? I think you can be successful almost anywhere with an inaugural event,” Burch said. “We certainly saw that when we went to Nashville last year. Or the Circuit of Americas. The key is, is it sustainable?”

Speedway Motorsports’ purchase of Dover leaves Indianapolis Motor Speedway (good luck getting the key from Roger Penske) and Pocono Raceway as the last independent tracks. When it comes to Pocono, Burch said Speedway Motorsports is always open for business.

Burch raved about Dover’s staff, from upper management to guest services, as well as the Monster Mile’s proximity to major cities, how it’s within walking distance of a casino/hotel, and the attractiveness of the Firefly Music Festival. Burch shuttled fans on golf cart rides to parking lots and picked their brains for feedback. After Sunday’s rainout, fans simply wanted earlier start times. May as well throw in lights.

“We’re very pleased with where we are with all of those key performance measures,” Tatoian said. “Admissions being one of them. Corporate partnerships. Sponsorships being the other.”

NASCAR and its tracks do not reveal attendance numbers.

Burch said from what he saw at Dover, where Monday’s turnout looked better than the average Xfinity Series race, it’s sustainable as a NASCAR weekend over the long haul. And at Dover, which had kiosks offering a free gift for fans who locked in 2023 tickets on site, drivers stumped to keep the race on the schedule. But as fans from all over the region hopped on the golf cart, Burch had a simple solution for those worried about the track’s fate.

Next time, bring a friend. Or two or three. Because Dover is a great place to race, “as long as it’s supported.” 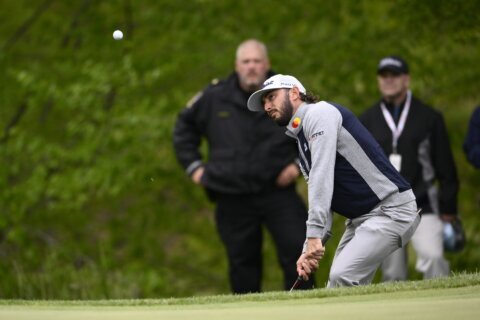 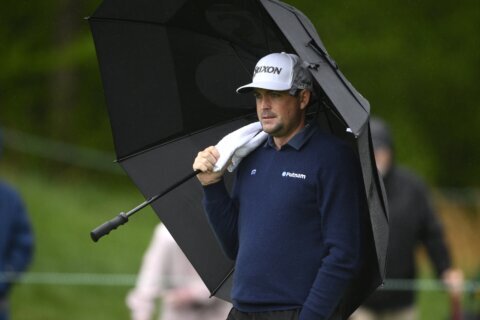 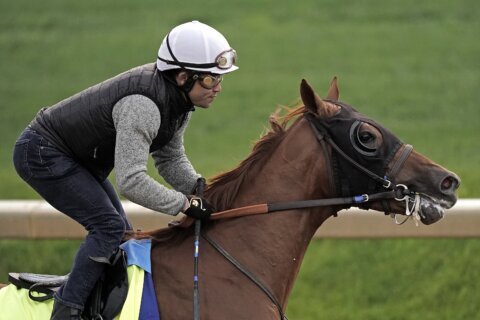