Among those likely playing at the NBA All-Star weekend this season are Kevin Durant, LeBron James and Stephen Curry.

Also playing at All-Star weekend: the men’s teams from Howard and Morgan State.

The NBA plans to generate exposure for historically Black colleges and universities at the All-Star weekend again this season, announcing Thursday the matchup for the inaugural NBA HBCU Classic on Feb. 19. Howard was scheduled to play Morgan State that day at home in Washington; instead, at the NBA’s request, the teams will meet in Cleveland on the Saturday of All-Star weekend.

Howard athletic director Kery Davis wasn’t sure how his basketball coach, Kenny Blakeney, would like the idea of giving up a home Mid-Eastern Athletic Conference game against a rival. Turns out, Blakeney didn’t need any convincing.

“This is great for everybody,” Davis said. “A rising tide lifts all boats and this is a great opportunity for all HBCUs and for us individually in terms of exposing people to our university and our university’s history, traditions and excellence, quite frankly. So, he got it right away.”

Some details are still being worked out. The NBA said the game will be nationally televised from the Wolstein Center in Cleveland, the arena that will play host to some All-Star weekend events. The home of the Cleveland Cavaliers, Rocket Mortgage FieldHouse, will be the site of the biggest events of the weekend, such as All-Star Saturday Night and the All-Star Game itself on Sunday.

There are no shortage of NBA players who have worked to raise the exposure of HBCUs in recent years, James, Curry and Chris Paul among them. The league said at All-Star weekend last season that it would do its part as well. On Thursday, in addition to announcing plans for the game, it revealed the start of a paid fellowship program that will place HBCU students in jobs with the league office and with NBA and WNBA teams.

“The NBA should be commended for the foresight and willingness to address important issues surrounding diversity, equity and inclusion,” Morgan State athletic director and vice president Ed Scott said.

Last season’s All-Star Game in Atlanta generated at least $3 million for HBCUs through donations to scholarship funds — and the exposure those schools got during the game was worth even more. The court was designed by artists from HBCUs; the pregame featured bands from Grambling State, Florida A&M and Clark Atlanta; and even the trio of referees assigned to the game by the NBA were all HBCU graduates.

Howard’s history is rich, with the school dating back to 1867 and a list of alumni that includes Vice President Kamala Harris, Elijah Cummings, Thurgood Marshall, Toni Morrison and countless other people prominent in their fields.

But when Davis travels the country, he said, he’s routinely asked where Howard is and if it’s a Division I institution. After All-Star weekend, he hopes, more people will know the answer to those questions. 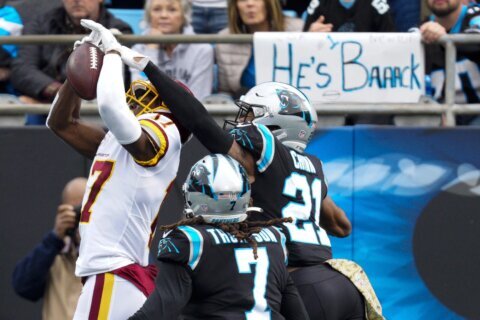