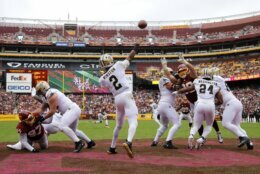 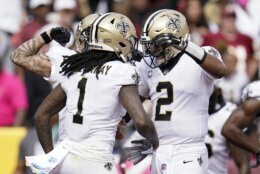 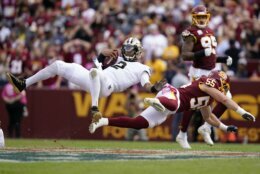 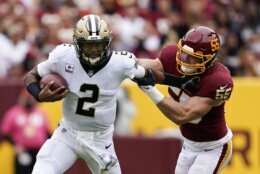 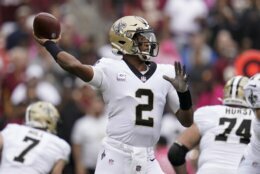 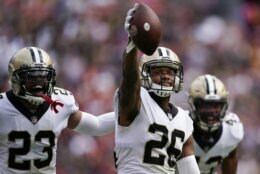 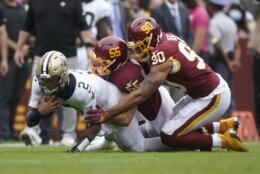 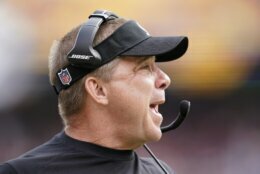 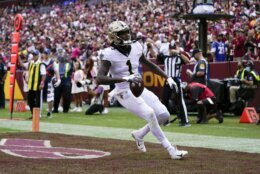 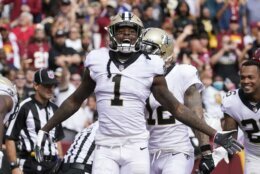 LANDOVER, Md. (AP) — After Jameis Winston connected with Marquez Callaway on a Hail Mary touchdown on the final play of the first half, Sean Payton recalled a similar play in his first season as New Orleans Saints coach.

Fifteen years ago, his team’s Hail Mary in Atlanta overshadowed a halftime performance by country music duo Sugarland. Payton on Sunday thought to himself: “If there was any halftime entertainment, that’s a tough spot to be in.”

This one was even sweeter. The Hail Mary was one of Winston’s four touchdown passes, as he overcame two turnovers to help the Saints beat Washington 33-22 for a bounce-back victory.

“Turnovers are going to happen — you just don’t want the trickle-down effect to happen,” said Winston, who completed 15 of 30 passes for 279 yards and made up for an inexplicable interception on the first possession and a fumble on Chase Young’s first sack of the season. “We played efficient football. We made plays when we needed it.”

The win came at a cost with two more injuries. Winston took every snap at quarterback for the first time this season, a necessity after Taysom Hill suffered a concussion while trying to catch a pass in the second quarter.

Winston completed a 72-yard touchdown pass to Deonte Harris, who departed with a hamstring injury. He also connected with Callaway on the 49-yard Hail Mary TD, found Callaway wide open from 12 yards out early in the fourth quarter and sent Washington fans to the exits with a pass to Alvin Kamara that turned into a 19-yard score.

“Any time I’m catching the ball, I love it,” said Kamara, who didn’t have a reception last week in the overtime loss to the New York Giants. “I think it adds an aspect to our offense. We had an opportunity to do that.”

The Saints (3-2) picked off Taylor Heinicke twice and put some pressure on him a week after not sacking the Giants’ Daniel Jones. Antonio Gibson ran for two touchdowns, but Washington (2-3) could not outscore another rough performance by its defense.

“I think we lack a little bit of confidence right now,” coach Ron Rivera said. “I’m very frustrated. We have too many good football players. Your record tells everybody what you are. We’re a 2-3 football team.”

New Orleans had two scoring plays of 45-plus yards for the first time since Dec. 18, 2016, when Drew Brees threw TD passes of 45 and 65 yards to Brandin Cooks.

Punter Blake Gillikin was an unsung star for the Saints, pinning Washington inside its 5-yard line three times. Gillikin had a 60-yard punt that rolled out of bounds at the 1, a 57-yarder to the 3 and a 53-yarder to the 2.

“I’d love to not punt at all because that means we’re doing well,” Gillikin said after getting a game ball. “But to have that kind of game and also get a win is great.”

Washington punted twice and turned the ball over once on those possessions.

Washington defenders were convinced the much-maligned unit had turned the corner after beating Atlanta last week in a victory made possible by Heinicke. Instead, the Saints finished with 369 yards and had scoring drives of 75, 60 and 75 yards to go along with the one-play Hail Mary possession.

Washington: Wide receiver Curtis Samuel’s lingering groin injury that caused him to miss the first three games of the season knocked him out after being targeted once by Heinicke. … Rookie right tackle Sam Cosmi injured his left ankle on Gibson’s touchdown, and attempted to return later in the second quarter before aggravating it, limping off and being ruled out for the rest of the game. … CB Darryl Roberts left with a quadriceps injury. … WR Dyami Brown and 2020 All-Pro RG Brandon Scherff were each inactive with a knee injury.

Saints: have their bye week and then visit Seattle on Mon. Oct. 25.