ARLINGTON, Texas (AP) — Alex Smith has Washington at least temporarily in first place in the NFC East after winning on Thanksgiving for the first time, two years after a planned holiday showing was wrecked by the quarterback’s career-threatening leg injury.

Smith and his teammates aren’t going to concern themselves with how bad their division might be.

Antonio Gibson ran for three touchdowns, Smith threw a scoring pass and Washington pulled away in the fourth quarter of a 41-16 Thanksgiving victory over the Dallas Cowboys on Thursday.

Smith was days away from a second career Thanksgiving start in a visit to Dallas two years ago when he was injured. Now he has a second straight victory in his improbable comeback.

“It’s hard to put into words,” said Smith, who was a modest 19 of 26 for 149 yards and got bailed out on his only interception when receiver Terry McLaurin ran down Dallas linebacker Jaylon Smith to prevent a tying touchdown before the Cowboys had to settle for a field goal.

“I never would have dreamt in a million years something like this would be happening. Just thankful for it and making the most of it every day.”

Gibson’s second score was a 23-yard run on the first play after an ill-advised fake punt by Dallas as Washington beat its division rival on Thanksgiving for just the second time in 10 tries. Washington has been the most frequent visitor for the Cowboys in their annual holiday home game.

Washington (4-7) slides ahead of Philadelphia (3-6-1) in the NFC East and will stay in first place if the Eagles lose to Seattle on Monday night. It was the third win in five games since a five-game losing streak dropped Washington to 1-5.

The New York Giants can pull even with Washington by beating Cincinnati on Sunday, and they currently hold the tiebreaker because they went 2-0 against Washington this season.

“Our record’s not the best,” Gibson said. “We’re still in it. That gives us hope. That’s what we’re pushing for is we can still make the playoffs right now. We’re going to keep going.”

The Cowboys were playing a day after strength coach Markus Paul died at a hospital following a medical emergency at the team’s facility. Paul was honored with a moment of silence before the game.

The Cowboys trailed 20-16 when they faced a fourth-and-10 from their 24-yard line early in the fourth quarter. Darian Thompson took the snap in front of punter Hunter Niswander and pitched to Cedrick Wilson on a reverse that was stuffed for a 1-yard loss.

On the next play, Gibson easily beat the Dallas defense to the left pylon. After another Dallas punt, Gibson capped a clock-killing drive with a 37-yard score for a 34-16 lead.

Washington made it a blowout when Montez Sweat tipped and intercepted a pass right in the face of Andy Dalton and was free to run 15 yards for a TD.

Gibson, who already was the rookie leader in touchdowns rushing and now has 11, finished with 115 yards on 20 carries.

And two-time rushing champion Ezekiel Elliott of Dallas had just 32 yards while losing his fifth fumble of the season, by far the most of his five-year career.

McLaurin had the defensive play of the game, tackling Smith at the Washington 4 after Smith’s interception in the open field near the 50. The Cowboys went 6 yards in the wrong direction and had to settle for a short field goal and a 20-16 deficit late in the third quarter.

“I was just trying to make a play,” said McLaurin, who led Washington with seven catches for 92 yards. “But when our defense got that stop, that’s when I kind of felt like, ‘Wow, that was a big play.’ You never give up on any plays because you never know what’s going to happen.”

Dallas’ last lead was 10-7 in the second quarter after Dalton’s 54-yard touchdown pass to Amari Cooper, who had 112 yards on six catches.

Smith’s touchdown pass was a 5-yarder to tight end Logan Thomas, the former college quarterback who chunked the ball into the second deck of seats not long after his 28-yard pass to McLaurin on a trick play set up Gibson’s first TD.

“I told him he’s got a pretty good QB rating right now,” Smith said. “Gadget plays are a part of football, and what better day to run it on than Thanksgiving? Obviously we do multiple things with Logan. He’s a talented guy.”

A Dallas offensive line that has been in flux all season lost both starting tackles to injuries on the opening drive, which ended in a field goal. And that’s with the original starting tackles already out for the season with injuries.

Washington: at Pittsburgh on Dec. 6.

Cowboys: at Baltimore next Thursday. 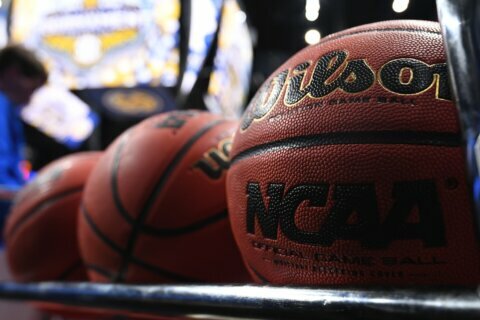