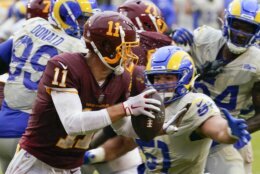 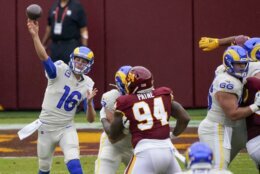 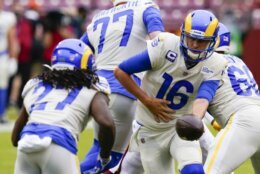 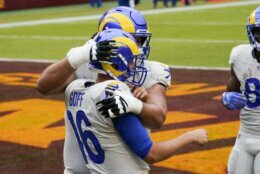 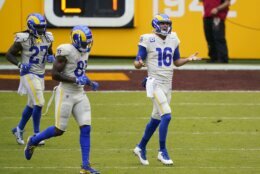 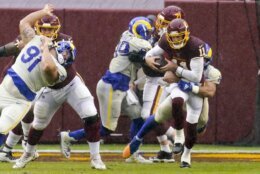 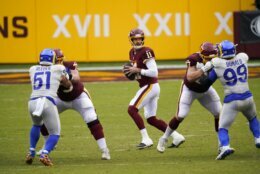 LANDOVER, Md. (AP) — The ball slipped out of Jared Goff’s right hand trying to spike it after a touchdown. That was about the only time he wasn’t in control.

Goff threw for 309 yards and two touchdowns and ran for another, and the Los Angeles Rams improved to 4-1 by beating Washington 30-10 on Sunday in Alex Smith’s return almost two years since a gruesome injury put his career in jeopardy.

“It’s incredible what he has overcome,” Rams coach Sean McVay said. “You almost wish it were in better conditions. Weird to say when it’s also our defense making things difficult for him. I’m just so impressed with him.”

Smith played his first NFL game 693 days since breaking his right tibia and fibula, entering when new Washington starting quarterback Kyle Allen injured his left arm. Smith was 9 of 17 for 37 yards on the same field he was carted away from on Nov. 18, 2018 before undergoing 17 surgeries to repair the injury.

“Very surreal at first,” Smith said of completing his comeback. “To have it happen as fast as it did was probably almost a blessing. … It was kind of nice in that situation not having to think about it. You just go out and do it.”

Former Washington QB Joe Theismann, who broke his right leg in similar fashion 33 years to the day before Smith was injured, said it was spectacular to see his return, adding, “I’m so thrilled and excited for him.”

The Rams are thrilled with such a strong start in a tough NFC West after missing the playoffs last season. They’ve swept the NFC East and are only a three-point loss on a questionable pass interference call away from being undefeated.

“It’s a great thing for our momentum,” said Rams receiver Cooper Kupp, who had five catches for 66 yards. “Feel great about being 4-1 but by no means does it mean we can be complacent. Making sure we continue to improve and trend upwards.”

Led by Aaron Donald’s four sacks and blanket coverage, the Rams clamped down on defense and ran it up in the rain on offense. Against the team he spent seven seasons with as an assistant, McVay dialed up a lot of play-action early, and unleashed Goff’s long-range passing game that had been largely absent through four games.

“I think we’re just waiting for opportunities,” Goff said. “This one was there, made a throw, made a catch. We’ve always known what our offense is capable down the field, and today we were able to show it.”

Goff led the Rams on a methodical, 10-play, 76-yard opening scoring drive that finished with a 1-yard TD run by Darrell Henderson. He connected with Robert Woods on a 56-yard touchdown, his longest completion of the season, and started the game a perfect 10 of 10 against a porous Washington defense.

When weather conditions deteriorated, the Rams kept it on the ground and continued to march down the field. Goff rushed for a 2-yard score on a play-action rollout midway through the second period to stake LA to a 20-7 lead that was never challenged.

Smith’s remarkable comeback aside, it wasn’t the performance coach Ron Rivera envisioned for Washington (1-4) when he benched starter Dwayne Haskins in favor of Allen, who knew offensive coordinator Scott Turner’s system better. Allen was 9 of 13 for 74 yards passing and scored on a 7-yard rushing TD when he was injured on a hit by Jalen Ramsey and replaced by Smith.

Rivera said he kept Allen on the sideline after being cleared “out of an abundance of caution” and expects him to continue as the starter if healthy.

“I thought Kyle handled himself pretty well,” Rivera said. “He took us down, we scored a touchdown, we moved the ball. He made some good decisions and it’s unfortunate he took the shot that he did. I would’ve loved to have seen him finish the game.”

Donald took down Allen once and Smith three times to continue his monster start. The Rams’ standout defensive tackle has 7 1/2 sacks through five games.

Donald entered the week tied with Kansas City’s Chris Jones and Chicago’s Akiem Hicks for the NFL lead among defensive tackles and tied for fourth overall. He has 23 1/2 sacks in 25 October games throughout his career.

“You watch guys like Aaron all the time and as effective as he is, you guys have no idea how impressive it is with all the attention he gets week after week,” Rams linebacker Troy Reeder said.

Not only was Haskins inactive after being demoted from starter to third on the depth chart, he wasn’t even at the stadium. The 23-year-old reported a stomach virus to the team Sunday morning and was told to stay home.

This is likely to stir up more speculation about Haskins’ future. Rivera said if Allen can play next week, Smith would back up and Haskins would again be inactive.

“I feel for him for sure,” said Smith, who has counseled Haskins on the ups and downs of being a young QB. “As frustrated as I know he is, it’s obviously important to try to put that aside and continue on his path.”

Washington: No. 2 pick Chase Young returned after missing a game with a groin injury.

The Rams visit the 49ers next Sunday, while Washington is at the NFC East rival New York Giants.