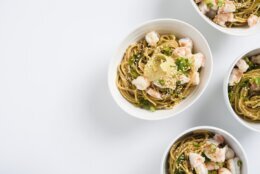 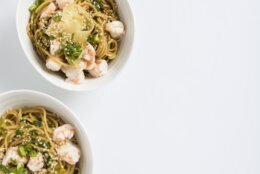 As summer sets in, warm bowls of chewy, satisfying ramen and soba can take a refreshing turn to become the center of refreshingly chilled salads such as hiyashi chuka.

The Japanese dish typically is served as a cone of chilled ramen noodles covered with julienned strips of several ingredients, including cucumber, ham, omelet, ginger and carrot. Poached shrimp and chicken also are common additions.

We took loose inspiration from this salad for a chilled noodle recipe in our book “COOKish,” which limits recipes to just six ingredients without sacrificing flavor. Paring down the ingredient list to essentials was key, and happily shrimp, scallions, noodles and a flavorful dressing didn’t leave us needing more. That’s partly thanks to using seasoned rice vinegar, which is flavored with sugar and salt, making it a three-in-one ingredient that punches above its weight.

When shopping, look for non-instant dried ramen, sometimes called chukamen or chuka soba; the noodles may be straight or curly. Additional options for topping the salad include shredded carrots, slivers of tomato and shredded lettuce.

Ramen Salad with Shrimp and Scallions

Cook the noodles in a large pot of boiling water until tender, then drain, rinse with cold water and drain again. In a large bowl, mix the soy, vinegar and sesame oil. Add the noodles and toss. Divide among 4 serving bowls, then top with shrimp and scallions. Drizzle each portion with additional sesame oil.

Optional garnish: Toasted sesame seeds OR pickled ginger OR both