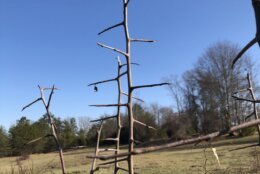 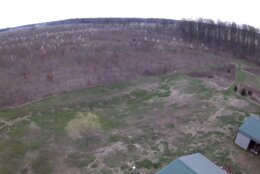 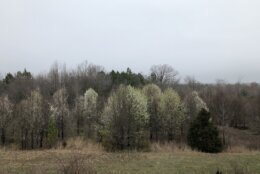 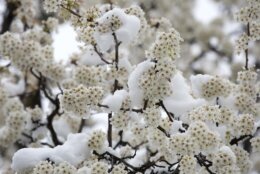 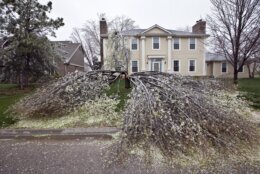 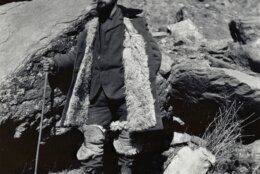 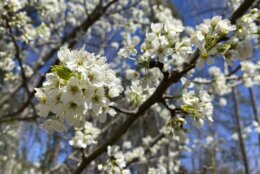 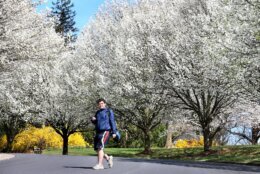 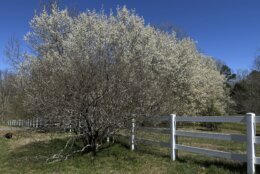 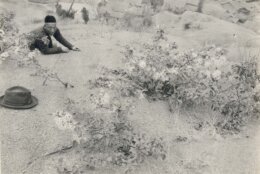 Bradford pears and 24 other ornamental trees were developed from Callery pears — a species brought to America a century ago to save ravaged pear orchards. Now, their invasive descendants have been reported in more than 30 states.

“Worse than murder hornets!” was the tongue-in-cheek title of a U.S. Department of Agriculture webinar in 2020 about Callery pears including the two dozen thornless ornamental varieties sold since the 1960s.

“They’re a real menace,” said Jerrod Carlisle, who discovered that four trees in his yard and one at a neighbor’s had spawned thousands on 50 acres (20 hectares) he was turning from cropland to woods in Otwell, a community of about 400 in southern Indiana.

Indiana is among 12 midwestern and western states that have reported invasions, though most are in the South and Northeast.

Until 2015, Carlisle rented his field to a farmer. Then he enrolled it in a USDA crop reduction program that paid for planting 29,000 trees as wildlife habitat.

Carlisle realized the spiky flowering pears were a problem in 2019. When he cut or mowed them, new sprouts popped up. Trees sprayed with herbicide regrew leaves. Cutting off bark in a circle around the trunk kills most trees. Not these.

He and his 17-year-old son have cut down an estimated 1,400 Callery pears, applying herbicide to the stumps. But he figures there are about 1,000 more to go.

Without regular maintenance, fields near seed-producing trees can be covered with sprouts within a couple of years, said James “J.T.” Vogt, a scientist at the U.S. Forest Service’s Southern Research Station in Athens, Georgia.

Seedlings only a few months old bear spurs that can punch through tractor tires, said David R. Coyle, an assistant professor in Clemson University’s Department of Forestry and Environmental Conservation.

The stench wafting from the tree’s billows of white blossoms has been compared to perfume gone wrong, rotting fish, chlorine, and a cheese sandwich left in a car for a week. The trunks branch off in deep Vs, so after 15 to 20 years they tend to break in storms.

But Frank N. Meyer, an agricultural explorer who brought 2,500 species of plants including his namesake Meyer lemon to the USDA in the early 1900s, called the Callery pear wonderful, noting that it survived drought and poor soil.

At the time, a bacterial disease called fire blight was devastating U.S. pear orchards, University of Cincinnati researchers Theresa M. Culley and Nicole A. Hardiman wrote in a 2007 BioScience article about the plant’s U.S. history.

In 1952, USDA workers noticed a spikeless mutant growing among Callery pears started from seed. By grafting its cuttings onto roots of other Callery pears, they cloned an ornamental line they named Bradford pears. That variety was commercially available by 1962, Culley and Hardiman wrote.

Other seedlings grew into 24 more ornamental varieties. All are so pretty, hardy and insect-resistant that they were planted nationwide.

Bradford and other Callery ornamentals are the third most common trees of 132 species planted along New York City streets — more than 58,000 out of 650,000 as of 2015, the most recent count, said city parks department spokesman Dan Kastanis.

But the city is no longer planting them, Kastanis said. Neither is Newport News, Virginia, which got rid of its Bradford pears in 2005. South Carolina, Ohio and cities including South Bend, Indiana, have banned or are banning all commercial varieties of Callery pears.

Some states, including Missouri and Alabama, are asking homeowners and landowners to stop planting them or to cut existing ones down and apply herbicide to the stumps. Several, such as North Carolina, offer free native trees to landowners who provide photos proving they have cut down Callery pears on their property.

For the USDA, which ordered Meyer to send Callery pear seeds from China, the nasty spurs and marble-sized, inedible fruit were irrelevant. What mattered was that the plant was resistant to fire blight.

In 1971, the USDA even put out a brochure about their care, touting them as trees that bloom several times from spring through fall, thrive in many climates and soils, and don’t attract plant pests.

Now, the USDA describes Callery pears as near ubiquitous and has been studying the best way to kill them.

Their adaptability is one reason they’re so invasive. And their bug-resistant waxy leaves mean insect-eating birds don’t come near them.

“They’re kind of a food desert for a bird,” said Coyle, who leads Clemson’s annual “Bradford pear bounty,” providing native saplings to landowners who have felled their Callery ornamentals.

It turned out that, although trees of the same variety cannot produce seeds with each other, two different varieties within a pollinator’s range can produce fruit that squishes on sidewalks and feeds starlings and robins, which spread the seeds widely.

In addition, the root stock can send up sprouts. If those aren’t regularly pruned to prevent them from blossoming, they can cross-pollinate with the grafted-on tree to produce fertile seed, noted University of Cincinnati’s Culley.

“A wild population can potentially originate from a single landscaping tree that someone plants in their yard,” she said in an email.

Carlisle, the Indiana landowner, thinks he’s finally getting ahead of his invasion because native trees planted for reforestation, especially six oak species, are casting enough shade to inhibit Callery seedlings.

“I truly believe I’m in eradication mode now,” he said.

This article was originally published April 21, 2022. It has been corrected to state that fire blight is a bacterial disease, not a fungus.