BOSTON (AP) — After her home flooded five times in the past year, Tilicia Owens was on edge with every…
Listen now to WTOP News WTOP.com | Alexa | Google Home | WTOP App | 103.5 FM

BOSTON (AP) — After her home flooded five times in the past year, Tilicia Owens was on edge with every impending storm and ready to leave her Detroit neighborhood behind.

But then the 40-year-old quality engineer heard the city had a program that could prevent heavy rains from inundating her basement and damaging her furniture, photos and exercise equipment. The city is tapping $2.5 million in federal stimulus money as part of a $15 million effort to provide pumps and other equipment to help prevent flooding in 11 neighborhoods.

“That would mean the world to me,” said Owens, who has applied to the city’s Basement Backup Protection Program, which would provide homeowners a pump to remove floodwaters or a valve outside the home to prevent water from entering.

Detroit has turned to the $350 billion in Coronavirus State and Local Fiscal Recovery Funds to partly finance the project. Part of the $1.9 trillion American Rescue Plan approved last year, the money is meant to help communities recover from the pandemic and can be used for everything from job creation to child care to housing.

More than 60 states, counties and cities, including Detroit, are tapping the funds for housing programs.

With President Joe Biden’s Build Back Better bill floundering and federal Emergency Rental Assistance running out in some places, the funds have become a critical source of money to address a shortage of affordable housing and a growing homelessness crisis. Prioritizing housing is also a reminder that the long-running shortage of affordable housing, especially in communities of color, has worsened during the pandemic, a time when a looming eviction crisis and rising housing prices threatened millions of families.

“There was already growing awareness before the pandemic in states and cities around the country that affordable housing problems that always existed were reaching an all time level and just had to be addressed,” said Stockton Williams, the executive director of the National Council of State Housing Agencies. “The pandemic has shown a brighter light on that, especially as they relate to the most vulnerable renters and homeowners.”

For many communities, the amount of money available in the state and local fiscal recovery funds is also historic and more than many have spent on housing in a year or even a decade.

“This is certainly transformational funding,” Jacqueline Edwards, the director of the Maricopa County Human Services Department in Arizona, said of the nearly $85 million it has to spend on everything from new housing to additional shelter beds to helping homeowners repair their air conditioning and stay in their homes when temperatures heat up. Typically, the county has a few million dollars to spend each year on these services.

“We’ll be able to make significant changes, not just that will impact today, but will impact lives for years to come,” she added.

But advocates say it still is only a start and significant federal investment — much of it in the Build Back Better bill, passed by the House but currently held up in the Senate — is necessary to fix the problem.

According to the Center on Budget and Policy Priorities, 1 in 4 families eligible for federal rental assistance received it before the pandemic. The National Low Income Housing Coalition estimates that $86 billion annually is needed over the next decade for universal housing vouchers and housing funds. Another $70 billion is needed for public housing repairs.

So far, more than $11 billion from the state and local fiscal recovery funds have been committed to housing-related programs, according to the Center, which is tracking spending.

States in the West, Midwest and East have already made significant commitments, according to a February report from the National Low Income Housing Coalition. Southern states, long known for having among the weakest tenant protections, have committed very little.

Among the biggest areas of investment is a promise to build more affordable housing.

Massachusetts has allotted nearly $600 million to affordable housing, including $150 million for new housing and $150 million to maintain public housing. Colorado lawmakers have proposed spending $400 million and Washington, D.C., has set aside $323 million, including $17 million for community groups to provide housing for victims of domestic violence. Clark County, Nevada, home to Las Vegas, whose tourist economy was hammered by the pandemic, plans to spend more than a third of its funds, or $157 million, on housing.

Others states, led by Washington, Oregon and New Jersey, are working to shore up their eviction protections — something the U.S. Treasury Department has encouraged.

“A lot of people who never thought they would be housing unstable … are in this situation. And so it is scary and people don’t know quite where to turn,” said Janel Winter, the director of New Jersey’s Division of Housing and Community Resources.

Several communities are using the funds to help the homeless.

North Carolina has set aside $15 million to rapidly rehouse people at risk of homelessness because of the pandemic. Clark County, Washington, is spending $4.4 million to fund homeless outreach teams while Burlington, Vermont, plans to use $1.4 million on 30 shelter pods for people to sleep in and store their belongings.

Austin, Texas, which has hundreds of homeless encampments and upwards of 2,500 people sleeping on the street most nights, is putting more than $106 million towards homelessness. That is in addition to the $110 million that Travis County, home to Austin, is putting towards the problem.

The funds will help move the homeless into temporary housing and eventually into permanent units that offer services like counseling and rental assistance. There is also funding for 1,300 new housing units set aside for the homeless and the city has acquired several hotels with the money.

“We are focused on building a system that doesn’t just move people off the streets into shelters but is focused on resolving their housing crisis,” said Dianna Grey, the city’s homeless strategy officer.

Several cities are using the funds to save homes battered by years of neglect and to ensure impoverished families can remain housed. Milwaukee wants to spend $15 million to rehabilitate up to 150 city-owned, foreclosed houses.

Detroit has set aside more than $83 million for housing-related spending, including $27.5 million to repair 1,000 roofs — tripling the amount it spends on its low-income home-repair program. It’s also spending $14.2 million to renovate vacant homes and $6.4 million to set up an online system allowing residents to find and apply for low-income housing.

Deputy Mayor Conrad Mallett said the spending priorities are aimed at preventing further declines in the city’s population, which has dropped dramatically since the 1950s.

“If we are going to maintain population and attract new people to the city, it is going to be because of the housing opportunities that we can provide,” he said, adding that the city also has to help those who have remained in Detroit. 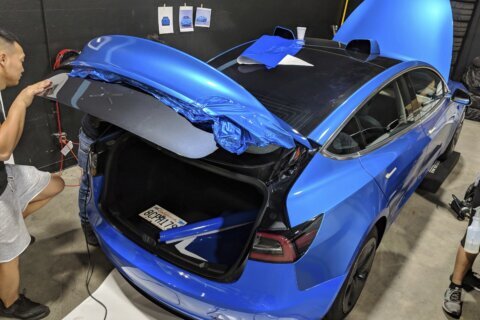 What to know before getting your car wrapped