Becky Lynch may have met her match for her toughest foe yet. Bianca Belair and Liv Morgan? Nah, defeated and dumped down the depth chart. Ric Flair? Not quite, largely because it’s a one-sided, old man yelling-at-the-clouds rivalry on the Nature Boy’s part.

OK, Ronda Rousey? Hey, if the former UFC champion that Lynch pinned at WrestleMania in 2019 wants a rematch, just name a date — say, the first weekend of April in Dallas — and it’s on.

Wrestling fans are awaiting that match.

But the “ only lady ” Lynch says that has a chance of taking the WWE Raw women’s championship off her, is her 13-month-old daughter, Roux.

She took a sabbatical riding high as WWE’s version of “ The Man ” and had pilled up video game covers, red carpet poses and crossover opportunities at a more rapid pace than her winning streak, but she returned as a mom, eager to show her toddler as she grows older that doors busted open for women in professional wrestling were kicked pretty hard by Lynch.

“One day, if my little girl wants to do this, there are no limits for her,” she said.

This working mom still has a few beatdowns to deliver.

“I want to make sure that this year I have better matches than I had last year,” she said. “And this year I get people talking more than I did last year. It’s just constantly wanting to elevate, one myself, and two, this business and the women that are going to follow after me.”

Lynch defends her WWE Raw women’s championship in one of the marquee matches Saturday in WWE’s Royal Rumble at The Dome in St. Louis, Missouri. Brock Lesnar and Roman Reigns are on the card. So is “Jackass” star Johnny Knoxville and don’t be surprised if rapper Bad Bunny pops up, as well.

The main attractions, of course, are the men’s and women’s Rumble where 30 competitors in each match try to become the last wrestler standing to earn a title shot at WrestleMania.

Lynch won the Rumble in 2019 and went on to main event WresleMania that year in a triple-threat match that included Rousey. The 34-year-old Lynch puts her title on the line this year against Doudrop. Her husband, star Seth Rollins, fights Reigns for the WWE Smackdown championship.

Lesnar puts the WWE belt on the line against Bobby Lashley, and Edge and Beth Phoenix wrestle The Miz and Maryse in a mixed-tag, married-couples match. Edge won the Rumble last year.

The 48-year-old Edge, considered one of WWE’s top all-time performers, knows a little something about returning from a break. The Canadian was diagnosed with cervical spinal stenosis and forced to retire in 2011. He gave a teary retirement speech on an episode of WWE’s flagship “Raw” TV show, was inducted into the company’s Hall of Fame and carved out a successful niche as an actor.

And he had moved on from his life as the Rated-R Superstar.

“For a while, I didn’t watch, period,” he said backstage at a WWE stop this month in Philadelphia. “That was my mourning period.”

Edge, born Adam Copeland, was told over a decade ago there was “no option” and his career was truly over. He had recurring roles on two TV shows that helped ease the sting of no longer being able to deliver spears in front of packed houses around the world.

He also got married to Phoenix — another retired WWE Hall of Famer, enjoying a new career as a wrestling announcer.

Edge had triple-fusion surgery and was eventually cleared to return. He made a comeback at the 2020 Royal Rumble, an anyone-can-show-up event known for springing surprise former stars and nostalgia acts on the crowd as the clock ticks down to zero. Edge handled the grind in ruthless feuds with Rollins and Randy Orton over the last two years, and now gets a second act with his wife to show, like Lynch, their young daughters that mom and dad can still go in the ring.

“Even when I got the OK to come back, we never assumed that we would interact on screen,” Edge said.

Phoenix also put her in-ring career largely behind her, raising kids and had gone back to school to prepare for her next stage of life.

“I didn’t have any intentions of getting back in the ring just because our women’s division was so hot and really growing,” she said.

Lynch helped lead the explosion of women’s wrestling in WWE, and billed herself as “The Man,” as she became arguably the most popular star in the company. She returned last summer with a bit of a mean streak and an outlandish wardrobe and calls herself “ Big Time Becks.”

Flair, the WWE Hall of Famer, has legitimately griped that he has the only right to call himself “The Man.”

Lynch and Rollins have their own bus and bring their daughter on the road, even on WWE stops in Saudi Arabia.

And just maybe, Roux can call both parents champs after the Rumble. 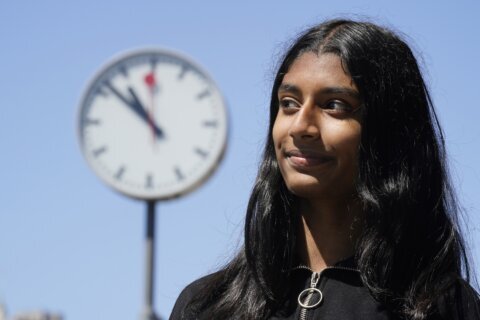