Threatened by decades of weather and wear, the campsites used by Selma to Montgomery marchers are among the nation's most endangered historic places, according to a new assessment by a preservation group.
Listen now to WTOP News WTOP.com | Alexa | Google Home | WTOP App | 103.5 FM
(1/5) 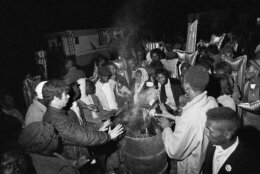 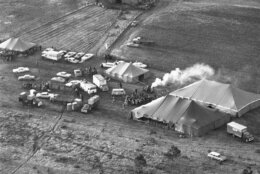 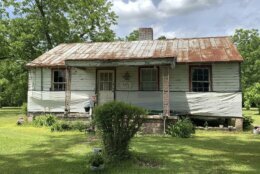 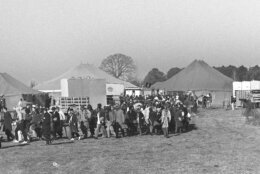 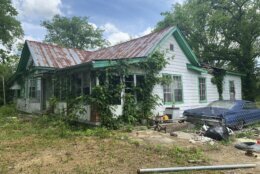 BIRMINGHAM, Ala. (AP) — The landmark voting rights march from Selma to Montgomery in 1965 didn’t happen in just one day: Participants spent four nights camping along the roughly 55-mile (89-kilometer) route through Alabama, sleeping in tents and near farm buildings under the watch of guards to prevent white supremacist attacks.

Now threatened by decades of weather and wear, the campsites used by those marchers are among the nation’s most endangered historic places, according to a new assessment by a preservation group. The sites, along with 10 other locations in nine states, need immediate attention or risk being lost, according to the nonprofit National Trust for Historic Preservation.

Three of the campsites are privately owned, rural acreage along U.S. 80, which links Selma and the capital city, and the fourth is the City of St. Jude, a Roman Catholic complex where marchers spent the night before thousands followed the Rev. Martin Luther King Jr. to the Alabama Capitol on March 25, 1965, to demonstrate for voting rights for Black people.

The march route looks different today than it did 56 years ago — what was then a two-lane road is now four lanes, with added traffic and new construction. While leaving the details of preservation to families that own the camp land and local officials, the trust is shedding light on the sites and others at a time when voting rights and racial justice are again a national issue.

“These 11 places celebrate the interconnection of American culture and acknowledge it as a multicultural fabric that, when pieced together, reveals our true identity as a people,” said Paul Edmondson, president of the Washington-based organization, which releases a list of endangered places annually. Other places on the 2021 list include:

– Trujillo Adobe, the remains of an early Latino settlement dating back nearly 160 years in Riverside, California.

– Summit Tunnels 6 & 7 and Summit Camp Site in Truckee, California, which tell the story of Chinese railroad workers who built the Transcontinental Railroad in the 1860s.

– Georgia B. Williams Nursing Home in Camilla, Georgia, once the state’s only Black-owned birthing place for African American women.

– Boston Harbor Islands, archaeological and historic sites on 34 islands just off the coast of Boston.

– Morningstar Tabernacle No. 88 Order of Moses Cemetery and Hall, a historic Black settlement dating to the late 1800s in Cabin John, Maryland.

– Home of Sarah Elizabeth Ray, a Black woman and activist who launched a legal fight after being denied entry to a segregated ferry in Detroit in 1945.

– The Riverside Hotel, which housed Black blues musicians and others during the Jim Crow era in Clarksdale, Mississippi.

– Threatt Filling Station, which catered to Black travelers on Route 66, and family farm in Luther, Oklahoma.

– Oljato Trading Post, built in 1921 and one of the few Navajo trading posts remaining in the region around San Juan County, Utah.

Under the watch of members of the Alabama National Guard, marchers first stopped about 7 miles east of Selma at land owned by David Hall, a Black farmer who risked harassment from white neighbors upset about the march. A photo of marchers showed them gathered around a fire built in an old metal drum for warmth, and Hall’s granddaughter Davine Hall said visitors still stop by.

“Sometimes we come outside and there’s a whole yard of bike riders, people who stopped by and want a tour,” said Hall, who splits time between the family land and California. “Sometimes they actually ask if they can spend the night.”

The next rainy night they stayed on the property of Rosie Steele, followed by a stay on land owned by Robert Gardner, where Tuskegee University students supplied dinner and marchers slept on donated swimming pool air mattresses, many of which deflated overnight. Gardner’s daughter, Cheryl Gardner Davis, was 4 at the time and still remembers the crowds and noise.

A white neighbor threatened her father for welcoming the marchers, she said, and for years the family kept quiet about the experience.

“I remember my father telling us that we couldn’t go anywhere by ourselves, that we always had to have an adult with us. He said if we saw a car along the road that was the FBI watching over us,” said Davis. “It was a little scary.”

Dozens of marchers spent the night along the way, and their numbers grew exponentially by the time the march reached downtown Montgomery.

While the families who owned the campsites had little contact through the decades, planning is underway to preserve homes that were on the Hall and Gardner sites in 1965 and perhaps turn them into educational venues, said Phillip Howard, a Birmingham-area consultant working on the project with The Conservation Fund.

On the final night of the march, about 3 miles (4.83 kilometers) from Alabama’s Capitol, demonstrators camping at the City of St. Jude were entertained by stars including Harry Belafonte; Tony Bennett; Peter, Paul and Mary; Sammy Davis Jr. and Joan Baez before the final leg of the journey. The chapel there remains much as it was then.

Today near the Capitol, a stone historical marker recounts the events of 1965, when King addressed an estimated 25,000 people at the end of the march. Plain steel signs identify the campsites used by the marchers along the way, but there’s little else to signify their importance.