LOS ANGELES (AP) — The governors of California, Oregon and Washington issued travel advisories Friday urging people entering or returning to their states to self-quarantine to slow the spread of the coronavirus as infections spike across the U.S.

The advisories stopped short of stricter rules imposed by other governors and instead said people should avoid non-essential out-of-state travel and quarantine for 14 days after arriving from another state or country.

“California just surpassed a sobering threshold – one million COVID-19 cases – with no signs of the virus slowing down,” California Gov. Newsom said in a statement. “Increased cases are adding pressure on our hospital systems and threatening the lives of seniors, essential workers and vulnerable Californians.”

The effort two weeks before Thanksgiving — traditionally the busiest travel period of the year in the U.S. — coincides with warnings for people to rethink their holiday traditions and not gather in large groups or beyond their immediate families in settings where the virus could easily spread.

The West Coast states have some of the lowest number of cases per 100,000 residents. But they have also seen a troubling rise in transmissions in November, though not nearly as severe as North Dakota and South Dakota, which have the highest rates per capita.

Oregon for the first time on Thursday surpassed 1,000 positive cases in a day. Gov. Kate Brown announced a two-week “freeze” Friday that will limit restaurants to offering only take-out food and close gyms.

“If we do not act immediately, we will soon reach a breaking point,” Brown said in a social media video.

She said if cases remain at the current level, the travel advisory will likely become a requirement.

California on Thursday became the second state — behind Texas — to surpass 1 million cases of the virus since the outbreak began, though it ranks 40th for cases per capita.

Eleven California counties were forced to impose stricter limits on businesses this week after cases rose above thresholds established by the state. Three Northern California counties on Friday said they would voluntarily join nearby San Francisco in halting indoor dining to help control the virus.

California Health Secretary Dr. Mark Ghaly said the state chose not to ban travel or restrict flying and instead appeal to Californians’ sense of personal responsibility.

Andrew Noymer, a public health professor at the University of California, Irvine, said the voluntary element makes sense because the state can’t police whether people follow quarantine rules. If word got out that the state wasn’t enforcing restrictions, people would ignore it and “the whole thing becomes a farce,” he said.

“I think it sets the right tone that these states are taking it seriously and that we have a bunch of hot spots in the USA,” Noymer said. “Nobody wants to become North Dakota.”

The travel advisory is not as strict as rules implemented in June by New York, New Jersey and Connecticut.

Those three states require travelers to quarantine for 14 days and submit forms disclosing personal information if they arrive from states averaging 10 or more new daily cases of the coronavirus per 100,000 residents over a seven-day period, or from states where 10% or more of tests came up positive on average over the past week.

The West Coast measure will add to the misery of the airline and tourism industries that are reeling from a year when people have been told or encouraged to stay home for months at a time.

On Wednesday, three global airline alliances urged governments to favor testing and other measures over the “blunt instrument” of quarantines. Oneworld, Star Alliance and SkyTeam, which represent 58 airlines, said testing could be part of an overall approach to restart international travel, which is down 92% from pre-COVID-19 levels.

Visit California, a nonprofit promoting state tourism, said the recent uptick in cases was cause for concern going into the holidays.

“California’s tourism businesses are disappointed the pandemic is forcing this step, but the travel industry understands long-term recovery is not possible until COVID-19 rates are under control,” said Caroline Beteta, president and CEO of Visit California. “Safety remains our top priority.”

Dr. Jeffrey Klausner, an epidemiologist at the University of California, Los Angeles, said travel restrictions have a “limited impact” given how widespread the virus already is.

“We’ve got to focus on things that we have better evidence in terms of what works, like routine and consistent mask use, particularly indoors, testing, supportive isolation of those who are positive and supportive quarantine of those who are exposed,” he said.

The travel advisory comes after San Francisco and 10 other health officers in the Bay Area on Monday issued a joint advisory, urging residents to self-quarantine for two weeks should they leave the region, especially if they have traveled on a plane or train where people did not wear masks at all times.

Some counties said the recommendation also applies to people traveling into the region from outside the area. 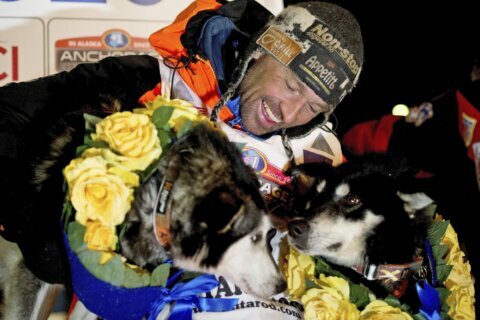