SAN DIEGO (AP) — California’s second-largest county was narrowly spared Tuesday from having to backpedal on its return to normalcy, escaping a major economic setback related to the coronavirus.

San Diego had a per-capita case rate, weighted for number of tests, of 6.9, according to data the state released for the week ended Sept. 12. If the rate had been above 7.0, businesses would have had to scale back operations.

The rate was 7.9 the previous week, putting the county on warning that it was on the brink of reversing course. The county’s percentage of positive test rate was 3.8, staying well below the 8% rate that would require closures.

Dr. Mark Ghaly, secretary of the California Health and Human Services Agency, said San Diego has worked hard on contact tracing and testing and that authorities were still trying to understand the reasons for a jump in its case rate earlier this month. He noted an outbreak of more than 850 cases at San Diego State University.

“These are going to be ongoing conversations to understand where a county is,” Ghaly said.

California has seen remarkable recent success with the virus. But the campus outbreak threatened to put San Diego over a state threshold for cases that mandates many businesses close or restrict indoor operations.

For some, it would have marked the third closure since California instituted the nation’s first statewide shutdown order in March.

It has been a dizzying turn of events for the county of 3.3 million residents that less than a month ago was the only one in Southern California with virus case numbers low enough to advance to a second level in the state’s four-tiered system for reopening.

San Diego could still be moved to a more restrictive tier if cases rise and will have to wait at least three weeks to advance to a less restrictive tier. Its current tier limits indoor capacity to 10% for gyms and 25% for restaurants.

San Diego County Supervisor Jim Desmond, a vocal critic of the state’s criteria, said staying put was no cause for celebration.

Before Tuesday’s reprieve, Jon and Angie Weber said they wouldn’t comply if ordered to stop serving inside their Cowboy Star Restaurant and Butcher Shop in downtown San Diego. They say they have exhausted savings and couldn’t survive a third closure. Without the restaurant they opened in 2008, they are unable to pay home loans.

Angie Weber said she was “very relieved” to stay open but noted that the restaurant could be forced to close again if San Diego posts elevated numbers for two straight weeks.

San Diego State cases surged during the last week of August, shortly after classes began, leading the school to suspend its limited number of in-person classes for four weeks on Sept. 3. 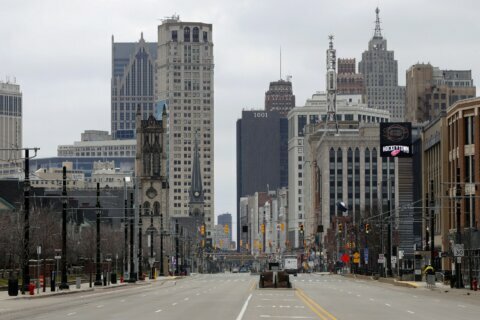