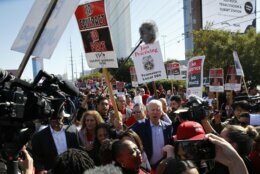 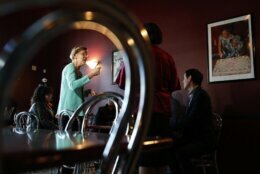 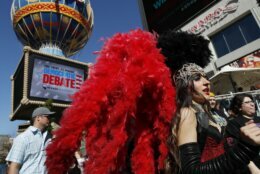 LAS VEGAS (AP) — Candidates have hustled past tourists and slot machines to ask housekeepers and cooks for their votes in the back of flashy casinos. They’ve made their pitches over plates of tamales, tacos and soul food. They’ve walked a picket line in the street with union workers. And then, with unsurprising showmanship, there was that flock of pigeons with tiny MAGA hats.

If Nevada has one job in the Democratic primary, it’s to offer something different. And in many ways it has delivered. As the presidential race turned to the state this week, gone was the earnestness of Iowa and tradition of New Hampshire and in its place was racial diversity, a new unpredictability and the muscle of urban, union politics.

“Nevada is truly a state that represents the rest of the country,” former Senate Majority Leader Harry Reid said, famous for his Nevada cheerleading and early primary state trash talk. “It’s not like Iowa where you have no diversity … New Hampshire is a state that has no diversity.”

It’s far from clear that Nevada’s more representative population — it is 29% Latino, 10% black, 9% Asian American and Pacific Islander and 49% white — will result in a dramatic scramble of the pecking order set by Iowa and New Hampshire. In the past, Nevada Democrats have twice been a tiebreaker in two-person contests. In this crowded field of candidates, the state’s input isn’t expected to reorder the race.

Still, the Silver State campaign has delivered on some of its promises to change it up on the campaign trail, offering up scenes that are hard to imagine happening elsewhere.

President Donald Trump couldn’t resist getting in on the action. He spent much of the week sleeping at this gleaming hotel tower on the Las Vegas Strip. Tourists booed and cheered as they watched his motorcade cruise along a Las Vegas Strip eerily cleared of traffic after a rally in Phoenix on Wednesday. He had another on Friday in Las Vegas.

On Saturday, seven casino-resorts on the Las Vegas Strip will be among 200 locations hosting sites for the state’s Democratic caucuses. (This state doesn’t blink at allowing the democratic process in adult playgrounds devoted to gambling and overindulgence.)

Nevada’s turn near the top of the presidential campaign calendar is still new, added ahead of the 2008 election. That means caucuses here don’t come with the same traditions and voters haven’t become habituated to seeing the candidates at their neighborhood parks and high schools.

“Dude, we just touched Bernie!” two University of Nevada-Las Vegas students yelled to a third shortly after Sanders wrapped up a campus rally.

Campaigns have had to be creative in pursuit of voters who can be hard to find, not hyper-engaged, new to the process and, sometimes, behind a gate. Traditional organizing tactics like door-knocking and phone-banking are tough in Nevada, where people move so often that records of addresses and phone numbers are regularly out of date.

So many Nevadans don’t have landlines that the former Mayor Pete Buttigieg’s campaign relied more on text messaging rather than phone banking, said Olivia Bercow, a campaign spokeswoman.

The campaign found it tricky to do routine canvassing in the locked apartment complexes and gated communities in the sprawling suburbs. It focused on asking supporters to organize friends and neighbors, helping them get inside.

They’ve also looked to find locals where they hang out — at their church, the “first Fridays” art walk, open mic nights, a Dia de los Muertos celebration or a salsa dancing class. But there’s one place you don’t go, campaigns learn quickly.

“If you go to the Strip thinking that you’re going to talk about Pete, most people you find don’t live in Nevada,” Bercow said. “Its not a great use of time.”

In a state with strong labor, among the most coveted group of voters are the casino workers’ Culinary Workers Union, Local 226. While they are sometimes unnoticed by the millions of tourists frequenting casinos, the workers who keep the hotels humming, the drinks flowing, the rooms clean and the dishes sparkling are part of a 60,000-member majority-female, majority-Latino group that presidential candidates have aggressively courted.

Even though the union’s leaders have said the group is not endorsing, candidates are still working to woo the union’s politically engaged members. Warren and former Vice President Joe Biden were among the candidates touring the casino’s employee dining rooms during the week.

On Wednesday, nearly all of the candidates carried signs and chanted as they joined picketing union members in front of a towering casino-hotel that’s been locked in a longstanding labor dispute with the Culinary Union. Warren wore red,matching the workers.Biden wrapped an arm around the union’s leader, Geoconda Argüello-Kline, and former South Bend, Indiana Mayor Pete Buttigieg, Minnesota Sen. Amy Klobuchar and billionaire businessman Tom Steyer carried signs that said “No contract, no peace.” Nearby, a troupe of dancers dressed as a bartender, cook, server, cocktail waitress, housekeeper and janitor danced in unison.

There was little peace at the Wednesday debate, the most combative of the primary and the first to feature former New York Mayor Mike Bloomberg. Although Bloomberg isn’t competing in the Nevada caucus he took nearly as many blows as Trump, who spent the night down the street.

As Trump appeared in the city, so too did a group of pigeons with tiny red “Make America Great Again” hats like those worn by by Trump’s supporters on their heads. One pigeon had a tiny blond wig similar to Trump’s distinctive hair. A self-proclaimed “underground radical group” that goes by the acronym P.U.T.I.N. (Pigeons, United To Interfere Now), told the Las Vegas Review-Journal they released the pigeons as an “aerial protest piece” in response to the 2020 Democratic debate as “ a gesture of support and loyalty to President Trump.” They also hope to elevate the stature of the pigeon, the group said. 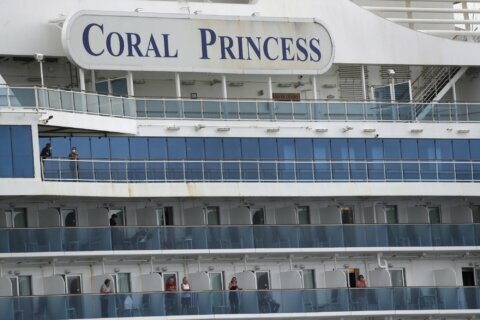 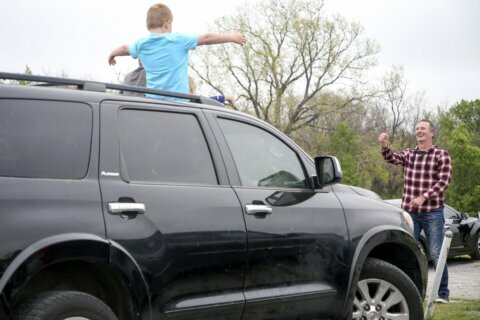