BOISE, Idaho (AP) — A drag performer has filed a defamation lawsuit against a far-right blogger he accuses of releasing a doctored video that falsely made it look as if he had exposed himself to children.

Eric Posey filed the lawsuit Monday in a court in northern Idaho, saying his reputation was damaged and his professional opportunities suffered after Summer Bushnell, who runs a blog called “The Bushnell Report,” released the video and falsely told her social media followers that Posey had committed a felony by exposing himself to children during a Pride event in June.

A subsequent police investigation cleared Posey of wrongdoing, and a city prosecutor said an unedited copy of the video showed no evidence of indecent exposure.

“When there are outlandish lies that are made public and recirculated and take on a life of their own, the person who the lie was about is harmed,” Olson said. “It has an impact on every single aspect of their life, every day. This disinformation is not true — it just needs to be stopped.”

Bushnell said in a telephone interview Wednesday that she did not have an attorney and couldn’t discuss the case, then went on to deny the allegations.

“I have not defamed him,” Bushnell said. “I did not know his legal name until I got served, and I maintain that he should not have done what he did in front of children in a public venue.”

Posey has been a drag performer since he was 18, according to the lawsuit, and uses the stage name Mona Liza Million. He hadn’t performed in about five years when friends who were board members of the North Idaho Pride Alliance asked him to perform at the Pride in the Park festival in Coeur d’Alene in June.

Posey performed three times wearing a long-sleeved leotard, black shorts and tights, with a shiny metallic boa around his waist. Posey did not remove clothing, and his genitals were always covered, Olson wrote in the lawsuit.

The Pride event made national news at the time — not because of Posey’s performances, but because 31 members of a white supremacist group called Patriot Front were arrested near the park and charged with conspiracy to riot. Many have pleaded not guilty.

In the lawsuit, Posey contends Bushnell decided to boost her own profile by seizing on the attention surrounding the Patriot Front arrests.

“To do so, she fabricated a sensationalist story that Posey exposed his genitals in public, including in front of children,” Olson wrote in the lawsuit. “Bushnell started by posting on her public Facebook page a video of herself talking to the camera. She stated that a man in a dress flashed his genitalia to the crowd, including minors. She said she would put up blurred video to prove it.”

In a second post, Bushnell said Posey’s actions were felonies and urged people to call law enforcement and ask to have Posey arrested. She also posted an edited video of one of Posey’s performances in which his groin area was blurred, an effect that made it appear as if he exposed his genitals, Olson wrote in the lawsuit.

“Bushnell’s lies had the intended effect,” Olson wrote, noting that the blogger’s popularity on Facebook soared and that the video had been viewed more than 19,000 times. That was a huge jump compared with previous videos on her page, which drew 235 to 1,400 views, according to the lawsuit.

The doctored video was also shared across other accounts and platforms. The Coeur d’Alene Police Department received complaints, though none from people who saw the performance firsthand, the department noted at the time. They investigated and sent the unedited video to the prosecutor, who found no evidence of indecent exposure.

Still, flyers with an image from the doctored video were posted around town, according to the lawsuit, and the images and Bushnell’s statements helped fuel misinformation about a kids drag show performance at the Boise Pride Festival in September.

Many people believed Posey “had committed a serious crime and sexually abused children,” Olson wrote, adding that Posey was exposed to hatred, contempt and ridicule and that photos of the doctored video still circulate online.

Posey’s reputation has been tarnished, he has suffered distress from harassment and the police investigation, has suffered consequences with his employer, and has lost professional opportunities, Olson wrote.

Posey is seeking damages exceeding $10,000, as well as attorneys’ fees.

Misleading rhetoric aimed at LGBTQ people has escalated in recent months, and events featuring drag queens are frequent targets. Experts have warned that some extremist groups may see the rhetoric as a call to action. 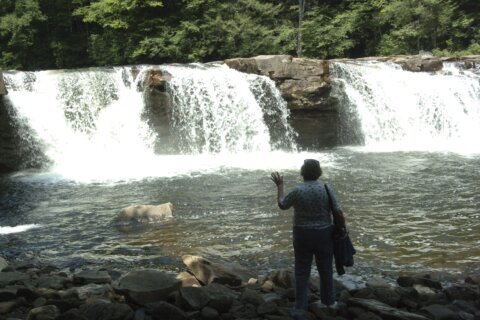