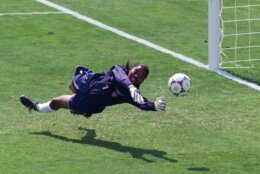 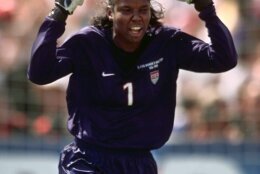 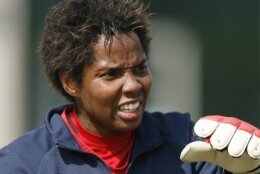 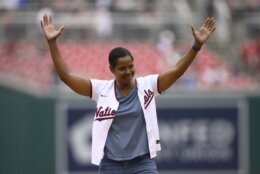 Briana Scurry’s U.S. national soccer team jersey is at the Smithsonian’s National Museum of African American History and Culture in a permanent display that notes the contribution of Title IX to leveling the playing field.

The law helped paved the way for the Black goalkeeper to knock down barriers with her talent, determination and grit, amassing a long list of honors in what was a predominantly white sport.

“When the curators of the National Museum of African American History and Culture contacted us I remember thinking this can’t be real — because the reason is I didn’t realize that my body of work in soccer and my advocating for TBI (traumatic brain injury) and gay rights was actually making that big of an impact in my community to the point where I’d be worthy of being in this museum,” she said.

Scurry, 50, has a World Cup title, two Olympic gold medals and was the first Black woman to be inducted in the National Soccer Hall of Fame.

It’s a draw-dropping resume, one that is even more impressive considering Scurry’s complex journey.

She has faced challenges as an openly gay Black woman in what was a predominately white sport. There were hardly any players who looked like her when she stepped on the sport’s biggest stage; today the US national soccer team’s roster features eight women of color.

Scurry reflected on her career in the memoir, “My Greatest Save: The Brave, Barrier-Breaking Journey of a World Champion Goalkeeper” released this month — fitting for Thursday’s 50th anniversary of Title IX.

The world champion benefitted from scholarship dollars the law brought to women’s sports — it was the only way she could attend college. She was also fortunate to have advocates who lifted her up, from coach Pete Swenson who secretly paid the fees for her elite youth team in Minnesota, to the woman — later her wife — who helped her emerge from a brain injury that dimmed her spirit for three years.

But Scurry’s perseverance landed her on the national team in 1994 and she played 173 games for her country during a career that spanned 14 years.

Her defining moment was the 1999 World Cup final at the Rose Bowl. The game against China went to penalties and Scurry’s shootout save set up Brandi Chastain’s winning kick. The jersey Scurry wore is the one on display in the Smithsonian.

Scurry remembers the moment vividly. Normally for PKs she followed a strict routine, turning her focus inward and prowling the goal “like a big cat” while avoiding the glare of her opponent.

“For some reason, and to this day I can’t explain it, on that third kicker, something in my mind said `Look,′ and so I looked at her and I could see her shoulders were sloped and she was kind of walking with a little slight jog and she just really didn’t seem like she was confident. And I read that whole thing in that glance and I’m like `This is the one.′

“So before I walked into the goal I knew I was saving this one.”

Then 13 years after that glorious moment, Scurry became embroiled in controversy during the 2007 World Cup.

Coach Greg Ryan decided to start the veteran goalie over Hope Solo in the semifinal match against Brazil. The United States lost 4-0, and Solo publicly criticized the decision, essentially blaming Scurry for the loss.

“I think the silver lining was my teammates, who supported me. I really respected what the women’s national team stood for, and what she did was way outside the bounds and an anomaly — taking it outside of the house,” Scurry said of Solo. “I also learned how to forgive someone — that was really what it was — learning how to forgive someone that clearly I felt betrayed me.”

But the real drama in Scurry’s life would come years later, while she was playing for her professional team, the Washington Freedom. During a game with the Philadelphia Independence, Scurry took a knee to the head.

Diagnosed with a concussion, she was only expected to be out for a few days. But for the next three-plus years, she struggled with constant headaches, vertigo, light sensitivity and memory lapses. An experimental surgical procedure that removed two tangled balls of nerves from the back of her head finally brought her back.

“I felt completely unplugged from what I liked to do before and all these different things. People describe depression in that way: You’re not into the things you used to be into anymore, you isolate, you withdraw, and you have low energy,” she said. “I mean, it’s literally like unplugging, that’s how it felt to me.”

From that dark period emerged a light: She met Chryssa Zizos, the head of a Washington D.C. public relations firm. Zizos helped Scurry buy back her Olympic gold medals, which she had pawned, and put her on the road to recovery.

“My head, that started the whole thing, right? So isn’t that isn’t that amazing? And that’s the beauty: I’ve learned to find that silver lining in everything. That’s such a cliche thing to say, but when it comes to concrete, horrible things, that at the time I felt was the worst thing ever, it ended up being the start of something amazing,” she said.