Although model trains and holiday greenery have long been intertwined in the popular imagination, the history of this particular genre is as precise as it is surprising.
Listen now to WTOP News WTOP.com | Alexa | Google Home | WTOP App | 103.5 FM
(1/20) 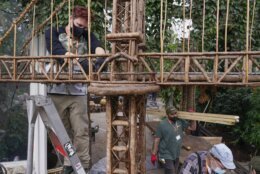 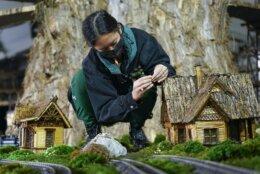 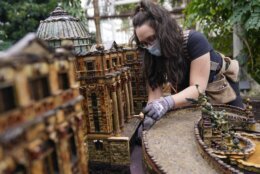 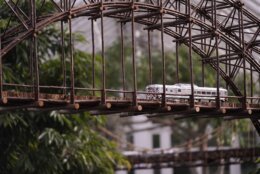 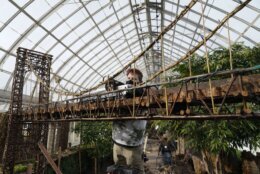 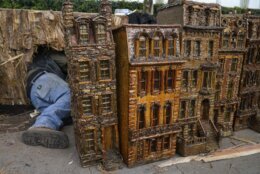 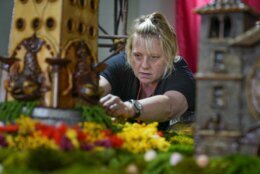 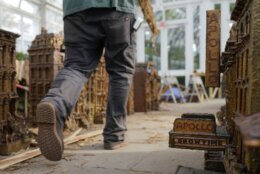 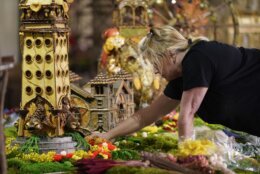 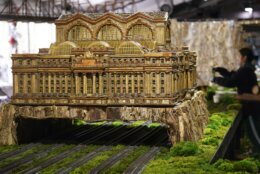 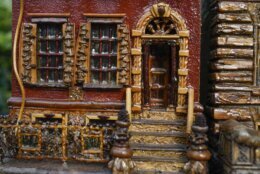 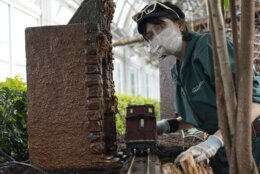 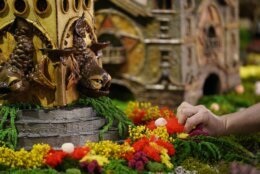 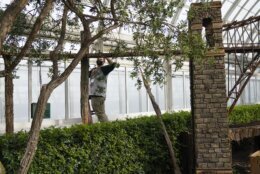 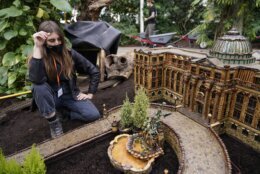 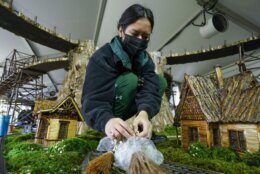 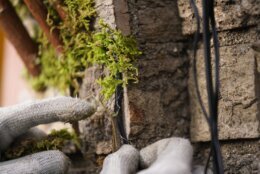 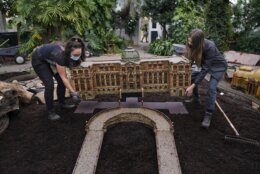 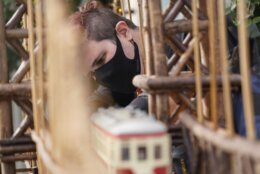 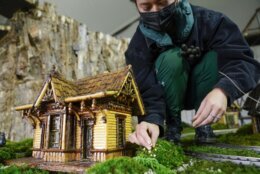 NEW YORK (AP) — Many holiday-season train shows were canceled or limited to fewer visitors last year because of the pandemic, but this year the popular attractions are back at botanical gardens, conservatories and elsewhere around the country.

The shows, now a tradition in many cities, feature a combination of model trains and painstakingly detailed models of landmark buildings made from leaves, twigs and other dried plant materials.

“It’s magical because people love to picture themselves in these small landscapes, with displays of greenery hiding whimsical elements surrounding the models of trains and ornate structures,” says Karen Daubmann, vice president for exhibitions and public engagement at the New York Botanical Garden, where the tradition started in 1992.

This year’s show there features more than 175 models of New York landmarks and over 25 different model trains wending their way past them.

Although model trains and holiday greenery have long been intertwined in the popular imagination, the history of this particular genre is as precise as it is surprising.

Almost 40 years ago, Ohio landscape architect Paul Busse took his quirky passion for trains, architecture and gardens public, setting up a garden railway exhibit at the 1982 Ohio State Fair. Throughout the 1980s, Busse developed his now-famous fanciful structures decorated with dried plant material. His “botanical architecture,” as he called it, along with his model train set-ups, were featured at prominent garden shows, primarily in the Midwest.

In 1992, the New York Botanical Garden, smitten by the concept and looking for a way to attract visitors in the winter, invited Busse and his team to create a “Holiday Train Show” there.

“That first year it only featured a couple train tracks and a handful of models of New York landmarks. But it was such a success that it became an annual tradition, with a few new models of landmarks added each year,” says Daubmann.

Similar holiday-themed train shows featuring the work of the Busse family and their team popped up at botanical gardens and other spots around the country, including the Franklin Park Conservatory and Botanical Gardens, in Columbus, Ohio; the United States Botanic Garden in Washington, D.C.; the Frederik Meijer Gardens and Sculpture Park in Grand Rapids, Michigan; the Krohn Conservatory in Cincinnati; the Nicholas Conservatory and Gardens in Rockford, Illinois; and the Eiteljorg Museum in Indianapolis.

Busse’s company, Applied Imagination, Ltd. — launched in 1991 in a tiny basement in Cincinnati — soon ran out of space and moved to Alexandria, Kentucky, where it is now based. It has a dozen or so full-time employees who build models in a studio stocked with plant materials.

“We’ve got everything from sticks of different colors and textures, to shelf fungus, to a huge array of pinecones. You can’t imagine how many types of pinecones there are out there,” says Busse’s daughter Laura Busse Dolan, who took the helm of the company five years ago.

To install all the shows, Applied Imagination’s teams — some tasked with creating model buildings and others working on tiny bridges and tunnels — pack their suitcases in October and travel “straight on until Thanksgiving,” she says. This year, they are putting together nine holiday shows, most at botanical gardens.

“It takes every individual in this company to pull this thing off,” says Dolan.

Over the years, the company has learned a thing or two.

“We now avoid using dried berries or acorns in our structures because they’re far too edible. Little creatures nibble on them while the pieces are in storage,” Dolan says. “One year, the squirrels ate one of our lampposts, so we learned the hard way.”

Standout models at The New York Botanical Garden’s show include One World Trade Center (made using an upward branching pattern to symbolize the spirit of rebirth after 9/11); the Solomon R. Guggenheim Museum (made largely of shelf fungus); the Statue of Liberty; the Apollo Theater; Coney Island; numerous brownstones; and some of the botanical garden’s distinctive buildings.

“On average, we create about 50 structures a year for various locations,” says Dolan. “I would say we’ve made 2,000 to 3,000 total over the course of our existence.”

The New York show runs from Nov. 20 through Jan. 23. Visitors are asked to show proof of vaccination and a photo ID, and there is a mask mandate in the garden’s indoor spaces. Tickets are timed, and available in advance.