LEADING OFF: Braves make their pitch to close out Brewers

Boosted by a sharp start from Ian Anderson, Braves pitchers have now thrown 19 straight scoreless innings against Milwaukee in the NL Division Series.

Christian Yelich, Avisaíl García and the Brewers have lost two games in a row by identical 3-0 scores. Atlanta leads 2-1 and can clinch the series at home in Game 4.

Anderson combined with four relievers on a five-hitter in Monday’s win. Milwaukee’s only runs in the series came on a two-run homer by Rowdy Tellez in the eighth inning of the opener.

“I thought we swung the bats better today. Luck wasn’t on our side today with some balls in some key spots. As the game got on, I think the first time through the order, we have to probably be a little tougher,” Brewers manager Craig Counsell manager said. “And we’ve got to catch a break, frankly.”

Neither team had announced a starting pitcher for Game 4 by Monday evening.

San Francisco took a 2-1 series lead with a 1-0 win Monday at a surprisingly blustery Dodger Stadium. Los Angeles managed just five singles, and the formidable lineup that led the NL with 830 runs and hit 237 homers in the regular season has been shut out twice in three games against San Francisco.

The defending World Series champions went 0 for 4 with runners in scoring position, failing to come through in the few times when it mattered. Regular postseason star Max Muncy is injured and not playing, but plenty of past October heroes — Justin Turner, World Series MVP Corey Seager, Taylor and Betts — have all run low on playoff magic.

“I thought we took some good at-bats and we just didn’t get rewarded,” manager Dave Roberts said.

Roberts hadn’t named a starter for Game 4 but said “everything’s on the table.”

We’re seeing all sorts of strategies in the postseason — openers, shifts, four-man outfields and a lot of analytics.

But the best way to win so far? Hit home runs.

The teams that hit the most homers were 11-0 through the first 13 playoff games as of Monday afternoon.

The Astros have revamped their rotation for the AL Division Series after a rainout in Chicago.

Lance McCullers Jr., who shut out the White Sox on four hits over 6 2/3 innings in the opener, will now pitch Game 4. José Urquidy had been set to start for Houston on Monday, but the game was postponed.

Houston leads 2-1 in the best-of-five matchup.

Carlos Rodón is scheduled to start for Chicago, with Game 1 starter Lance Lynn available out of the bullpen. He went 13-5 with a 2.37 ERA in 24 starts this year, but he was limited down the stretch because of shoulder soreness and fatigue.

With every swing, Joc Pederson enhances his nickname — “Joctober.”

Pederson is 3 for 3 with two home runs, all as a pinch-hitter, for the Braves in the NL Division Series. His three-run drive sent the Braves over Milwaukee 3-0 on Monday for a 2-1 edge in the best-of-five matchup.

Pederson has driven in four of Atlanta’s seven runs in the series.

The 29-year-old outfielder has hit 11 postseason home runs and helped the Los Angeles Dodgers win the World Series last year with his longballs. He then signed as a free agent with the Chicago Cubs in the winter and was traded to Atlanta in July.

“He’s been in the big moment, the big stage, and he’s performed and guys appreciate that,” Braves manager Brian Snitker said.

Asked how he pulled a high pitch for Monday’s homer, Pederson shrugged and said, “I guess I’m a pretty good player, I don’t know. I knocked it out of the yard.”

Pederson wore the pearl necklace in his postgame news conference that became part of his uniform late this season. He said the pearls are real and were ordered from his jeweler.

“I think I just saw the pearls and thought that looked cool,” he said. 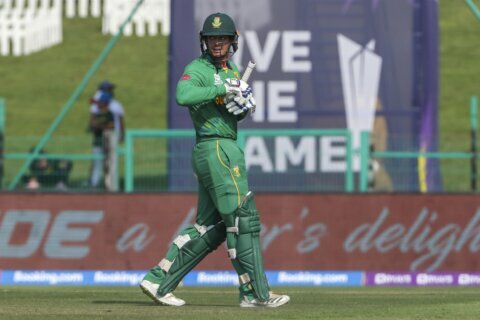 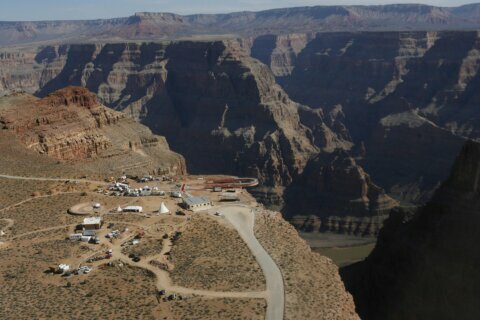