A 17-minute video of the same scene showed the group, which included people of different races, at times weaving in and out of traffic on their bikes, riding on the wrong side of the road and eventually leaving police headquarters with the confiscated bikes.

Perth Amboy police have not responded to requests for information Tuesday. It’s unclear whether the handcuffed person was formally arrested and charged. In the longer clip, he’s seen in what looks like the lobby of police headquarters on his phone, not handcuffed, as others leave with their bikes.

Speaking to the person filming the 17-minute clip, a Perth Amboy officer wearing sergeant’s stripes in the lobby of the police station says she had warned the group that they were going against traffic.

“You think I want to be here taking bikes away? This is so asinine,” she said. “The whole point of this is I don’t want to call parents and say … their kid got hit by a car.”

The 55-second video was posted online Sunday along with the comment: “We can’t even ride bikes now… I’m not surprised. I’m just angry.”

The short clip shows officers ordering the riders to dismount their bikes, amid crosstalk. The officers then handcuff the young Black person, though it’s unclear why. Officers then lead him to the police SUV and place him in the back.

The 17-minute video, posted on YouTube by the same person who filmed the shorter clip, shows more than a dozen bikers riding through Perth Amboy before police stopped them. The footage, which is edited, shows riders popping wheelies, chatting, stopping to buy a 24-pack of bottled water and jumping off steps on their bikes. They also at times cross over the double yellow line into traffic and veer close to cars, appearing to graze them.

Police cars drive along side the group and the bicyclists sought to evade them by riding into a park or turning down other streets, footage shows.

About 8 minutes into the clip, the voice of an officer in a police vehicle is heard on a megaphone telling the group to stop. The group, which at that point was at least five people, including the person who ends up getting handcuffed, stopped.

A white officer approaches them and tells them that in Perth Amboy, they’re required to have licenses for their bikes. A city ordinance requires a tag to operate a bike on city streets.

The officer thanks the group for stopping. One of the group can be heard saying, “That’s how you gotta handle business,” and they clap for the officer as he walks away.

The video is edited at about 11 minutes, and it’s not clear how much time has passed when it resumes again showing more officers on the street, including the sergeant, and the young person who ends up getting handcuffed and placed in a police SUV. There’s crosstalk as the sergeant says she advised they not be in the middle of the street and orders the bikes to be confiscated.

After the handcuffing, the video shows a police truck with bikes in the bed driving away.

After another edit in the video, the footage picks up at the station, where one of the riders is seen wheeling his bike out of the building. The handcuffed person appears, no longer in handcuffs.

The person filming speaks to the sergeant, who tells him that they had been warned to stop. The person filming says he was in the back of the group and hadn’t heard the warning. She also warned him that the bikes are supposed to be registered and added that officers didn’t want to end up with anyone injured.

“Just like that, we outside,” the person recording the video says shortly before it ends. 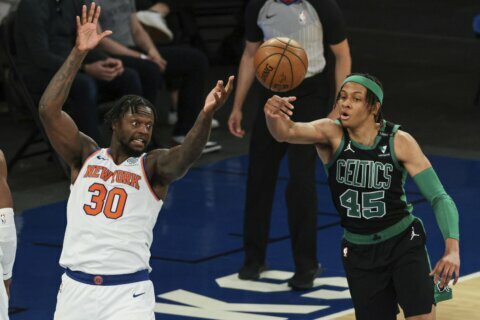 Randle, Knicks beat Celtics to clinch No. 4 seed in East 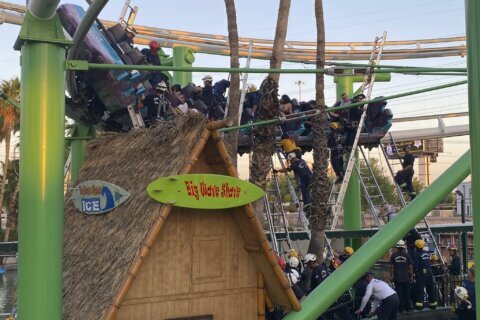 22 people rescued after roller coaster in Arizona gets stuck