Yet by the 1990s, logging and clear-cutting for farms and development had all but eliminated longleaf pines and the grasslands beneath where hundreds of plant and animal species flourished.

Now, thanks to a pair of modern day Johnny Appleseeds, landowners, government agencies and nonprofits are working in nine coastal states from Virginia to Texas to bring back pines named for the long needles prized by Native Americans for weaving baskets.

“I like to say we rescued longleaf from the dustbin. I don’t think we had any idea how successful we’d be,” said Rhett Johnson, who founded The Longleaf Alliance in 1995 with another Auburn University forestry professor.

That’s not to say that the tall, straight and widely spaced pines will ever gain anything near their once vast extent. But their reach is, after centuries, expanding rather than contracting.

Scientists estimate that longleaf savannas once covered up to 143,750 square miles (372,000 square kilometers), an area bigger than Germany. By the 1990s, less than 3% remained in scattered patches. Most are in areas too wet or dry to farm.

Fire suppression played a critical role on the longleaf’s decline. Fires clear and fertilize ground that longleaf seeds must touch to sprout. Properly timed, they also spark seedlings’ first growth spurt. And, crucially for the entire ecosystem, they kill shrubs and hardwood trees that would otherwise block the sun from seedlings, grasses and wildflowers.

“The diversity of the longleaf pine system is below our knees,” sad Keith Coursey, silviculturist for about 70% of the 529,000-acre (214,100-hectare) DeSoto National Forest in south Mississippi.

Of the 1,600 plant species found only in the Southeast, nearly 900 are only in longleaf forests, including species that trap bugs as well as fire-adapted grasses and wildflowers.

The forests harbor turkeys and quail — but also about 100 other kinds of birds, nearly 40 types of animals and 170 reptile and amphibian species found only among longleaf. One is the gopher tortoise whose burrows shelter scores of animal species including mice, foxes, rabbits, snakes, even birds, and hundreds of kinds of insects.

Plants and animals have lost ground along with the longleaf. Nearly 30 are endangered or threatened. Dozens more are being studied to decide whether they should be protected.

Johnson, who retired in 2006 as director of Auburn’s Solon Dixon Forestry Education Center in south Alabama, said working surrounded by longleaf made him realize that stands were losing quality and shrinking in range. “Just as alarming, people who understood longleaf were disappearing as well,” he said.

Johnson and alliance cofounder Dean Gjerstad spread the word about the tree’s importance. “We were like Johnny Appleseed — we were on the road all the time,” said Johnson, who retired from the alliance in 2012.

By 2005, the alliance, government agencies, nonprofits, universities and private partners were working together. In 2010, they launched America’s Longleaf Restoration Initiative, with a goal of having 12,500 square miles (32,370 square kilometers) of longleaf by 2025.

The initiative built on efforts by federal and state agencies including the U.S. Department of Agriculture’s Natural Resources Conservation Service to provide incentives for owners to return land to longleaf pines, Johnson said.

Most of the land planted in the last 10 years had been “highly erodible cropland,” he said. “Better a longleaf plantation than a cotton field.”

The initiative is trying to ensure that at least half the restored land is close enough to existing forests that plants and animals could, over generations, turn the new stands into functioning ecosystems.

When the ecosystem returns, landowners can look forward to annual income from activities such as hunting and wildlife photography rather than only from intermittent timber harvests, said Kevin Norton, acting chief of the National Resources Conservation Service.

Because most longleaf acreage is privately owned, 80% to 85% of the planting so far has been on private land, said Carol Denhof, president of The Longleaf Alliance.

Another 5,160 square miles (13,360 square kilometers) must be planted or reclaimed from stands overly mixed with other tree species to meet the initiative’s 2025 deadline, she said. “I’m hopeful we can get there but … we have a lot of work to do.”

About 400 acres (160 hectares) of land returned to longleaf were planted by the Alabama-Coushatta Tribe of Texas, for their needles. But branches from most of the first planting are now too high to reach. So Gesse Bullock, the tribe’s fire management specialist, said he is pushing for another planting on the 10,200-acre (4,100-hectare) reservation.

Basket weavers include the tribe’s realty officer, Elliott Abbey. “When I was younger,” he said, “I thought it was work – something my aunts made me do,”

Now, Abbey said, “It strikes me in the heart that this could die out.” 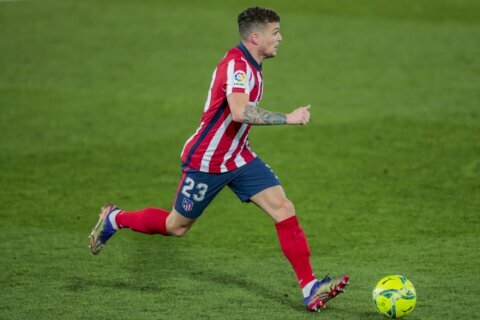 Atlético appeals to CAS in attempt to suspend Trippier ban