TAMPA, Fla. (AP) — This has been a year for Tampa Bay sports like no other, though the area’s three successful professional franchises haven’t had a chance to truly capitalize on the boom and energize pockets of a fan base that in recent years have earned the tag of front-runners.

It has been — and continues to be —- a missed opportunity because of the coronavirus pandemic.

“As fans you can’t ask for much more, and you couldn’t be prouder of all the teams,” said Hall of Fame linebacker and former Tampa Bay Buccaneers star Derrick Brooks. “You feel for them, though, not being able to go to the games and enjoy winning that much more.”

— The Bucs, who usually rank near the bottom of the NFL in attendance, are off to their best start in a decade behind Tom Brady. But they are restricted from filling thousands of seats ecstatic fans rushed to purchase after the six-time Super Bowl champion signed a two-year, $50 million contract with the team in March.

— The Lightning, a young, talent-laden hockey team that’s sold out every home game for the past five years, won a second Stanley Cup title but were forced to make their entire playoff run on neutral ice in Canada. They haven’t been able to celebrate their first crown since 2004 in a traditional way.

— The Rays, whose attendance woes across the Bay in St. Petersburg have ownership pondering splitting future home schedules between Florida and Montreal, hosted two playoff games at Tropicana Field before a limited number of family and friends before heading to San Diego and Arlington, Texas for the rest of a journey to the World Series.

Brooks knows what fans are missing.

The 2002 NFL defensive player of the year led the Bucs to their only Super Bowl title 18 seasons ago and will never forget returning to Tampa with the Lombardi Trophy to celebrate with an appreciative community.

“A blast,” Brooks recalled. “The passion, the pride was unbelievable. Winning a championship gave the whole city a sense of accomplishment.”

With Brady leading the way, the Bucs (6-2) are excited about the prospect of ending a long playoff drought and maybe even becoming the first franchise to appear in a Super Bowl played in its home stadium.

For Brooks, co-chairman of the Tampa organizing committee hosting the NFL title game as well as an executive vice president with the Stanley Cup champion Lightning, that would be a storybook finish to a year like none other for the area’s sports teams.

But it will be little respite for disappointed fans forced to follow the simultaneous success of the Bucs, Lightning and Rays from afar due to coronavirus pandemic restrictions that have limited attendance.

The restrictions have kept Brady from packing the stands at Raymond James Stadium, the Lightning from extending a five-year, 235-game string of consecutive sellouts at Amalie Arena, and the Rays from filling normally empty seats at Tropicana Field during a deep playoff run that ended with the AL champions losing to the Los Angeles Dodgers in the World Series.

Adding Brady not only heightened expectations for winning but filling 65,618-seat Raymond James Stadium, where a limited number of fans have been allowed for two of the three home games they’ve played so far this season.

Attendance was announced as 6,383 for a “soft” opening against the Los Angeles Chargers on Oct. 4 and 15,540 vs. the Green Bay Packers two weeks later.

But Rob Higgins, executive director of the Tampa Bay Sports Commission, said all is not lost.

The success of the area’s three major professional sports teams, he noted, has been a boom for the community’s image and figures to help a sagging tourism industry down the road.

“Sports have a way of galvanizing people,” said Higgins, also the executive director and chief executive officer of Tampa Bay Super Bowl 55 Host Committee. “It’s been incredible to watch … and has kept us (in the spotlight nationally) at a time when it’s needed most.”

Tampa toasted the Lightning with a boat parade on the Hillsborough River, followed by an outdoor celebration that drew about 16,000 socially-distanced fans to Raymond James Stadium, where the Stanley Cup has made two appearances in the past month.

Lightning stars Steven Stamkos, Nikita Kucherov and Victor Hedman led a delegation of players who returned for the Chargers-Bucs game and displayed the 35-pound trophy from an open-window suite while “We Are The Champions” blared from stadium speakers during a timeout.

While COVID-19 concerns likely will limit the number of opportunities fans get to mingle with the Cup in coming months, a local tour of the 35-pound chalice made a recent stop at a children’s cancer center, where strict guidelines were followed to keep patients and players safe.

Brooks, whose title with the Lightning is executive vice president of corporate and community development, offered a glass half full perspective on the NHL team not being able to celebrate their accomplishment in a traditional way because of the pandemic.

The Lightning began their playoff run in the NHL bubble in Toronto. They finished up in Edmonton, where they defeated the Dallas Stars in the Stanley Cup final.

“They did something no other team has done,” Brooks said. “It was a unique experience up there, and they were able to enjoy it with one another. Under the circumstances, with all they endured, I think that was needed.

“I look back at winning the Super Bowl. I never really had a chance to celebrate in the moment with my teammates. Everybody’s focus was on running round trying to find family,” Brooks added. “It was just them up there. Nobody else was around. That was special.”

It may have been special, but certainly not ideal for the Tampa sports scene. 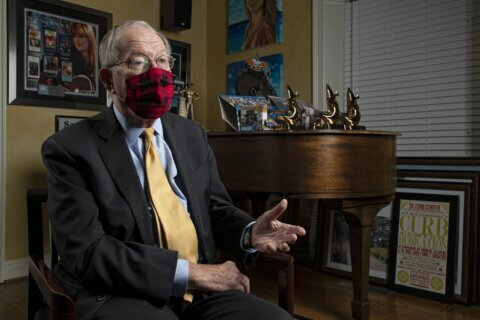