— “Enola Holmes”: It’s somewhat fitting that “Stranger Things” breakout Millie Bobby Brown gets her first starring role in a Netflix film, “Enola Holmes,” coming to the streamer Wednesday. (To be fair, it was supposed to be a theatrical release from Warner Bros. before COVID took its toll on the release calendar.) But it’ll reintroduce her to the base that made her famous. Brown plays Sherlock’s (Superman himself, Henry Cavill) little sister in this adaptation of the Nancy Springer mystery series.

— “Judy”: Miss out on Renée Zellweger’s Oscar-winning turn as Judy Garland? Time to get happy because “Judy” is coming to Hulu Friday. Inspired by Peter Quilter’s play “End of the Rainbow,” “Judy” looks at some of Garland’s last years of life, in late 1968 and early 1969 during a series of shows in London when her star has faded in the U.S. and she’s seen as a tragic liability. Zellweger makes the late icon come alive again with profound vulnerability, sadness and a wickedly dark sense of humor. And while her voice might not be an exact match, she captures Garland’s spirit and verve.

— Public Enemy returns to legendary record label Def Jam in over two decades to release “What You Gonna Do When the Grid Goes Down?” The 17-track album, out Friday, features a number of hot acts, including Nas, Run-DMC, Mike D and Ad-Rock of Beastie Boys, George Clinton, Rapsody, DJ Premier, Black Thought and Questlove of The Roots, Cypress Hill, Ice-T, PMD, YG and Daddy-O.

— The Bonnaroo Music and Arts Festival was supposed to take place in June in Tennessee but was canceled because of the coronavirus pandemic. This week, though, the festival is launching Virtual ROO-ALITY, a three-night live broadcast featuring new performances as well as content from the Bonnaroo archive. Starting at 5:30 p.m. ET from Sept. 24-26 on YouTube, Virtual ROO-ALITY will include new performances from Bruce Hornsby, Action Bronson, Chromeo, Tank and the Bangas and Ingrid Andress, and appearances from David Lynch, Paramore’s Hayley Williams, Big Freedia, Charli XCX and Laura Jane Grace. Archival performances will air from acts such as James Brown, Metallica, The White Stripes, Dave Matthews Band and Alabama Shakes.

— With the blink-182’s Travis Barker in the executive producer chair, rapper and rocker Machine Gun Kelly is releasing his fifth album on Friday. “Tickets to My Downfall” features 15 tracks, including collaborations with Halsey, Trippie Redd, blackbear and Iann Dior. The single “bloody valentine” won MGK the MTV Video Music Award for best alternative last month. Outside of music, the 30-year-old entertainer can be seen in the recent Netflix film “Project Power,” opposite Jamie Foxx and Joseph Gordon-Levitt.

— All those feeling stuck in place by the pandemic, here’s your chance to soar across the universe. “Cosmos: Possible Worlds,” returns for its third season at 8 p.m. EDT Tuesday on Fox. Astrophysicist Neil deGrasse Tyson hosts the series produced, written and directed by Ann Druyan, who worked with her Carl Sagan, her late husband, on the groundbreaking 1980 “Cosmos” documentary. The newest installment, created in partnership with the National Geographic Channel, promises to reveal “previously uncharted realms,” including worlds that humans may one day inhabit. NatGeo had first dibs, airing the series earlier this year, but such worthy escapism is worth revisiting.

— PBS’ “Frontline” series continues its three-decade tradition of examining the two major party presidential candidates with “The Choice 2020: Trump vs. Biden,” airing Tuesday on PBS stations (check local listings for time). The documentary offers what’s described as “interwoven investigative biographies” of President Donald Trump and former Vice President Joe Biden, looking at what shaped the candidates’ lives, how each approaches power and their view of America’s future. The two-hour film will be available at 7 p.m. EDT Tuesday at pbs.org/frontline and on YouTube at 9 p.m. EDT.

— Amber Ruffin, a writer-performer for “Late Night with Seth Meyers,” is taking center stage with “The Amber Ruffin Show,” debuting Friday on the Peacock streaming service. Ruffin wrote and appeared on Comedy Central’s “Detroiters” and is a regular narrator on the channel’s “Drunk History.” Her new show, she said, is a chance to do sketches, songs and jokes about “this terrible time we call now!” Her half-hour program is part of what Peacock has labeled a “topical” comedy block, which includes newcomer “Wilmore” with Larry Wilmore. Meyers is among the executive producers for Ruffin’s series, with nine episodes ordered. 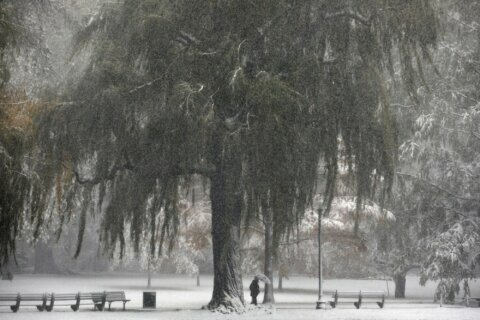