NEW YORK (AP) — Kylie Jenner is selling a stake of her beauty business to CoverGirl owner Coty, in a deal that values the reality TV star’s company at about $1.2 billion.

Coty said Monday that it will pay $600 million for a 51% stake in Kylie Cosmetics. It plans to launch more products under the Kylie brand and sell them in more countries around the world. The deal is expected to be completed early next year.

Jenner, part of the “Keeping Up with the Kardashians” reality show family, founded her company in 2015, tapping into her hundreds of millions of social media followers to promote her popular lip liners and liquid lipsticks.

The 22-year-old, who is the youngest sister of Kim Kardashian West, will still be the face of the brand and be involved in creating new products.

“Kylie is a modern-day icon,” said Peter Harf, Coty’s chairman of the board.

Coty hopes that the celebrity-backed business can help boost its sales and connect with younger shoppers under 35, a group that traditional makeup brands have struggled to reach. Coty’s other brands, including Max Factor makeup and Sally Hansen nail polish, have been around for decades.

Wendy Nicholson, an analyst at Citi Research, said that the deal could help Coty become a “faster growth company.” But she said a brand attached to a celebrity comes with risks, like the possibility that Jenner’s popularity could fade.

Coty said Monday that Jenner “is not a fad,” citing her brand’s growing sales and social media followers. Kylie Cosmetics brought in about $177 million in revenue in the last year, up 40% from the year before, the company said. And the brand’s Instagram followers grows by 7,000 a day.

Jenner’s products were only sold online when it was first launched, but last year the brand struck a deal to sell its goods in 1,100 Ulta Beauty stores. Jenner expanded her empire earlier this year with Kylie Skin, a line of moisturizers, under eye creams and facial scrubs.

“I’m excited to partner with Coty to continue to reach even more fans of Kylie Cosmetics and Kylie Skin around the world,” Jenner said in a statement. 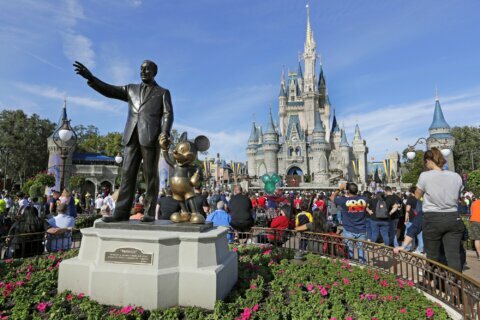 Judge sides with Disney in case of autistic accommodation